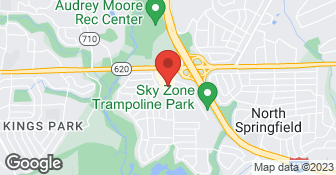 Apex Surveys is a family owned business established in 1990. The combined experience of both father and son equal over 60 years of quality friendly service to our customers. Pricing will vary according to service, lot size, and deed research. The average cost of a House Location Survey or Lot Stake (under 1 acre) in a standard subdivision is between $375-$475 depending on the particulars of the property. Please call or email for your custom quote!...

My engagement with Apex Surveys, LLP was exceptional from start to finish. Kathleen, the Office Manager was professional and very responsive. She provided an extremely competitive quote and scheduled the survey to meet our needs. Mitch and Gaelen were informative and performed the survey in a timely and professional manner. This company deserves your business!

Description of Work
Lot survey with stakes in corners and along property lines.

They did a great job and were easy to work with. The plat was delivered quickly.

Great overall experience. Apex was very polite an prompt in their communication (via email and phone) and they delivered my setback survey in timely manner. I emailed Apex to get an estimate for a setback certification. They responded within an hour with a quote. After shopping around for other companies, I decided to Apex because of their promptness and politeness in their email. I called to schedule the survey and Apex said they were about 7-10 days out to start the work. I still agreed to continue with their service. On a Friday about 10 days later, Apex showed up to do the surveying. I received an email from Apex on the following Wednesday (3 business days later) stating my survey was completed and once my payment was made, they would electronically forward my survey to print, or, if I was unable to print it, they would also mail it to me.

Two men arrived when promised. Spent around two hours surveying my whole neighborhood to determine the correct boundaries for the property. Decided that the head surveyor needed to take a look at their findings and departed. Returned a few days later, again after first calling me and arriving when promised. Two men spent nearly two hours that day carefully measuring and staking the property with boundary stakes and long nails in the ground with small pink flags. They explained to me that the nail were the exact boundary and the stakes were placed a couple of inches into the property. Very detailed and informative!

Flawlessly. I was not even home. When I got home I saw the stakes marking the ground. They ask for 5 to 7 business days to turn around drawings. In 2 days they called me to received payment and send me the stamped and signed plat files. Highly recommend Also note I currently own a townhouse and this work was done on a townhouse.

Description of Work
Apex provided me with a House Location Survey and Lot Stake. House Survey - also referred to as a Physical Improvement Survey. We will provide a current plat of your property, showing all of the existing physical improvements on the property (the house, fences, walks, patios, sheds, etc.) and their relation to the property lines. This plat gives the homeowner, builder, or contractor an accurate survey of what is located on the site. Lot Stake is when we recover or replace your property corners which are marked by 18” iron pipe that is set into the ground. We then accurately (using thorough research) delineate the property lines using 8” metal spikes, which are set at ground level and marked with fluorescent flagging. We then place 24” wooden stakes in the ground next to the metal spikes as a witness. With this survey you will be able to clearly see exactly where your property lines are.

They were beautiful! They marked my properly where the posts needed to be. They marked it within an inch. They put stakes everywhere to make sure it was precise. They sent me the survey in an email. It shows the lot lines. They showed where everything is! They showed gps coordiates. The other company I hired didn't do any paperwork.

Crew came out despite a very muddy day. They found the property corner markers (that we couldn't find) and clearly marked them, plus put stakes in the relevant parts of the lot line to verify correct setbacks. Very professional and worth the fee.

The team was wonderful. Couldn't ask for better service! I would definitely recommend them!

I contacted Apex Surveys through Angie's List one evening and received a phone call back the next morning. I was converting my garage into an office and needed a revised plat to file with the county. Apex did the survey on my property that was used when I purchased the house and they were able to quickly locate my files and discuss what I needed done. After a brief phone discussion I was able to schedule my job and the workers showed up the next day. I informed them that I needed a quick turnaround and I was able to get the revised plat within a week of my initial call. I was home when the crew arrived and found them to be professional and courteous. They worked efficiently, took care of my property, and in my brief discussion with the team leader I found him to be very personable and knowledgeable of his craft. I was glad to find such a reputable and long standing neighborhood business (North Springfield) to support While a property survey is not type of ting I will need done often, I would use them again in heartbeat and would highly recommend them to anyone else looking for a land surveyor. A+ on professionalism, cost, and turnaround.

DON'T CHOOSE APEX UNLESS YOU WANT TO BE BILLED FOR WORK THAT HAD NOT BEEN DONE. I choose Apex based on its reviews but was horribly disappointed in the service, professionalism, and most especially receiving an invoice for work that had not been done. After calling and receiving no response from the company, I had to find out from another surveyor about issues relating to the survey. When Apex survey did finally call me (several weeks later and after the closing), it was just about the invoice. When I spoke about my concerns, the owner? (Hagen) did nothing to address my concerns except offer excuses and talk about how good the ratings of his company are. He was extremely unprofessional and did nothing to address my issues. Details to follow: I was closing on a house and decided to choose Apex for the survey work rather than the survey company suggested by the title company (big mistake). When I called to arrange the survey and staking, I was given a date as to when this work was to be done. After about a week passed AFTER when the work was supposed to be done, I called Apex to find out why I had not received the survey and why the staking had not been done. I was told that they could not find the poles/metal needed on the corners to complete the survey. They said that would go out in a few days and "try" again. I called the realtor selling the house because the closing was now quickly approaching. The realtor called the survey company, which finally came out. The realtor apparently had to show the survey people how to do their job as the poles/metal were there the whole time despite what I had been told. (Keep in mind that the survey company did not call me to say that they could not complete the survey. I had to call them many days after the work was to be done.) The survey company finally found the poles that were there the whole time. I received a plat together with an invoice for the survey and a separate charge for "staked property lines." I was just about to pay the invoice when I decided to go over and look at the stakes. The reason I wanted to see the stakes first was because the survey appeared to show that my soon-to-be-fence was on the neighbor's property. Yet the survey stated that "all fences frame." (as a non-surveyor, I understood all fences frame to mean that the fences are in the property.) I arrive at the house and the stakes had not been put up. To repeat, I was invoiced for stakes when the staking had not been done. I called the survey company to find out about what I thought were discrepancies on the report and about the stakes. No response at all. The realtor was finally able to get in touch with Apex and was told that someone would eventually be out to do the staking (for which I had already been invoiced). Just days before the closing, the staking was finally done. In the meantime, I had to find out from another surveyor that the fence was in part on the neighbor's property. Not only did the survey company not respond to me, they never called me to tell me that there was an encroachment. I guess I was supposed to become an expert on reading surveys to figure that out for myself. Luckily, I was able to resolve the issue with a last minute negotiation and easement for the fence. No thanks at all to Apex. As a final insult, I was told when the invoice was sent (for work that had not been done) that I would receive "several copies" of the plat in the mail. I did not receive those.

Description of Work
Apex was hired to issue an accurate plat and stake the property.