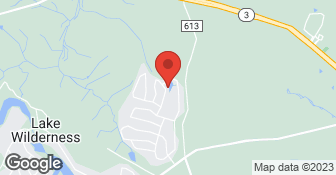 I am licensed at trapping and removal of nuisance wildlife from property and residences. I am also licensed and insured to complete repairs from damages caused by such wildlife. Family owned and operated.

A few months ago Paul came to assess a situation where what we believe were raccoons were getting into the attic at night. Paul identified several potential ways the critters were getting in and applied repairs. We haven't heard the animals in the attic since!

Paul called back within about 15 minutes of me leaving a message. Unfortunately, his website isn’t up to date, and he doesn’t service my town. He tried to come up with some referrals of people who he felt would do the job correctly for me. Paul spent several minutes on the phone with me, detailing where to look for outside entry points for the mice and how he would go about finding and getting rid of the mice we currently have. I very much appreciate that he took the time to give me advice that he was under no obligation to give me.

Paid $150 for an "inspection" and to get an estimate to remove insulation and sterilize wall where we think mice had perished in utility room. The assessment was vague ("fill gaps around house"); Estimated $485 to fill a few gaps around house. The technician also did not verify that we had a mice problem in the insulation -which is the reason we called them in the first place; price to remove and clean seemed quite high for a small job - $640 (and that is on top of the $150 we already paid). So close to $800 total to just remove a 7x9 area of insulation and sterilize and dispose. This seems excessive and we declined the service. Given that we already paid the $150 for the inspection and did not get anything other than an estimate for $1125 in additional work, this was money not well spent.

Description of Work
Inspection for mice problems; sought a quote to removed insulation on wall where mice had possibly perished, causing smell in basement utility room.

We live on 14 acres of property with a couple of ponds and an abundance of wildlife. Normally, this setting is quite peaceful; however when a family of beavers took up residence and started clogging up the driveway drain daily causing flooding; the peacefulness subsided. We had to clear the driveway drain daily, ( sometimes at dawn, other times in the pouring rain). It became the dreaded daily chore. I contacted advanced wildlife and Paul came out within a day to assess the situation. Traps were later set and Paul or another member of his crew would come back and check on them. Everyone was extremely courteous professional, ( and patient - as it took some time to catch the sneaky boogers). The team is very knowledgable as well ( asking as well as answering questions before making the best determination to handle the situation). In this case, trapping was the answer to save my driveway and the neighbors driveway. I would recommend Advanced Wildlife to my family, friends and neighbors as it's a great company with a trusted crew.

Description of Work
Trap and remove beavers from property

When putting my Christmas stuff away, I thought I saw a bat (had 2 in the house in August). Called Animal Control..they couldn't find anything. Called Pest Now, they were helpful but determined that I needed a Critter Person. After calling several on Angies list and not getting any response, I found Advanced Wildlife Removal. And although Paul was on his way to the an NFL Playoff game, he took the time to speak with me and text me to set up an appointment. This is a family business, not some franchise. Paul came out and looked at the property top to bottom, determined that a vole had probably come in somehow, although there was no obvious opening. They gave me a price and a date to 'critter' proof' my house giving me peace of mind. Pauls responsiveness was the reason I went with them and the reason I would recommend them and use them again.

It was outstanding. He is very dog friendly. He gives the dogs treats that we provide and they go inside so they won't get hurt by the snake. He comes when he says he would. He will call if the weather is going to bad. I can't think of anyone else when it comes to pest control.

Description of Work
He put our snake away.

We have lived in a house in the woods for 20 years, and often see various black and garden snakes around, but yesterday for the first time ever I saw a copperhead within a couple of feet of our front porch. I freaked for a bit, then settled down and called Paul Smith of AWR. He ascertained whether or not it was an emergency (it wasn't), then said he would come out the next day. The next morning he called and said he would be here between 12 and 2, and he arrived a little after 1. He and his crew did a very thorough inspection of the area around and under the porch, garden areas, and other areas around the house they deemed important, and they asked me if there were any other places I would like them to inspect. They did not find the copperhead, but they explained a lot about its habits, determined that what I saw was likely a large juvenile, and basically explained things that tended very much to put my mind at ease. They even pointed out the single instance of snake feces they found! They placed traps at likely entry/exit points under the porch and will follow up twice a week for two weeks. Paul provided an estimate for enclosing the porch in mesh that would prevent snakes from using it as a habitat, and explained the extent of the warranty against future incursions. He also made suggestions that we could do ourselves that might help. All in all, I found the crew to be extremely professional, courteous, thorough, and knowledgeable. Obviously, they also do other kinds of wildlife removal than snakes, and I can only assume they would offer the same thorough service for that. They come equipped with cages for humane relocation of many species and will euthanize when absolutely necessary. They answered every question I had, and they mentioned -- but did not push -- other services such as the barrier installation. All in all, an excellent experience.

Excellent service, clean and thorough work, very conscientious approach to doing the job really well. No mice now! And no longer have to worry about the vents rotting and falling apart. Nothing was disturbed or left in disarray around the property. When he did the vents, he used quality materials and the right techniques, and did a thorough, careful job. They look fantastic, and they will last many years. Mr. Smith is just starting this business, but he has had many years of experience working for another company, and is very customer service oriented. His carpentry experience is very useful, especially since my house is quite old and hard to work on, and so much of animal exclusion involves carpentry of some sort or hands-on knowledge of building techniques. Luckily, I only have mice to deal with, but I live in an area with abundant wildlife. His work is guaranteed for 2 years, regardless of whether a mouse or some other animal tries to get through it. I found him to be honest and ethical, polite and efficient. This is the only kind of person I want to do business with.

Description of Work
Paul Smith sealed many holes around the foundation of the house to exclude mice, and wrapped two triangle-shaped wooden louvre vents in the top attic with white sheet metal, secured with screws, and screened over them with one-quarter inch hardware cloth. He recommended this particular solution because the attic across the top of my Cape house is very tiny: a complete tear-out and replacement from the outside would have been very complicated and costly, and impossible from the inside.

The PestNow brand was originally founded in Virginia in 1995 as Superior Pest Management when four high school friends (Tony Bowers, Frank Bowers, Mark Tatum, and Joe Hamilton) came together to form their own company. With each of them bringing different work experience and education backgrounds to the company, they felt they could work together and use each other's strength to build a successful business. Since Virginia is one of the country's largest Real Estate markets in the country, they decided to start their business off with the WDI Report and approached realtors. With their goal of providing a high volume of inspections, they were able to offer their services at a low price. Low pricing, knowledgeable inspectors, and the ease of doing business with Superior led the owners to expand to other areas and open additional branches. With business exceeding expectations, Tony, Frank, Mark, and Joe decided they wanted to expand further and brought in Rusty Markland as their Operations Manager. With Rusty being long-time industry specialist, they are able to provide additional support to all of their branches; as well as make use of his years of experience to further improve the business. Now, in 2010 with demand for services continuing to increase and an impressive support system in place, the long-time friends knew it was time to implement a plan to broaden PestNow's reach and identified franchising as the best method to do that. By enlisting the help of franchisees to expand on the company's success, PestNow continues to build upon its reputation. Through franchising, they will be able to offer individuals the same opportunity they've enjoyed throughout the years- the ability to operate a fun, fulfilling, and profitable business while at the same time expanding the PestNow family to locales throughout the nation.  …

At S&S Waterproofing we have over 25+ years of combined experience in Waterproofing and foundation repair. We never use sub-contractors and aren't a franchise owned company that uses high pressure sales tactics. We are a certified foundation repair specialist and install hydraulic push piers and helical piers. We offer a lifetime transferable warranty and free inspections.  …

AWR does not exterminate insects.

Advanced Wildlife Removal is currently rated 4.8 overall out of 5.

No, Advanced Wildlife Removal does not offer free project estimates.

No, Advanced Wildlife Removal does not offer eco-friendly accreditations.

No, Advanced Wildlife Removal does not offer a senior discount.

Are there any services Advanced Wildlife Removal does not offer?

AWR does not exterminate insects.