With Angi since September 2014 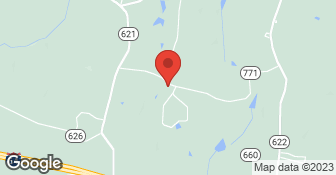 Since 1996, the Smallwood Family has been helping homeowners enrich their home living experience. Smallwood Renovations is a leading provider of home improvement products and services for homeowners in Richmond, Charlottesville, Williamsburg, Fredericksburg and all points in between.

Description of Work
Smallwood Renovations replaced all the windows in our house. We also had them replace a section of downspout. They did a really nice job, cleaned up after themselves and kept me informed. Keith Smallwood came out for the initial bid and seemed knowledgeable and helpful. We will likely use these guys again.

Because of the extensive rain we had in May/June, the project got start a couple of weeks later then originally planned. They sent out a two man team who worked the entire project from start to finish. They started immediately layout everything with stakes, string and paint. They had us come out and inspect the intended layout and confirm the scope of the project. We actually tweaked the angles and layout slightly at this point based on their suggestions for look and traffic flow. They had some great ideas. We signed off on the changes and they started digging the footers. The deck was big so lots of footers had to be dug. They then framed up the overall shape and got the posts ready to go as soon as the 1st of three inspections had to be done. Inspection was done and work continued. Footers were poured and cured, Framing filled in and stairs located, positioned and installed. Every morning I'd check in before work and asked about the plan of they day. They would review the days plan and let me know how the timeline was going. Every night when I got home I'd inspect the work and everything was done as per plan with quality materials, appropriate fasteners and as per code. The project took a few weeks. This was actually really good time considering the multi levels, complexed angles and many rain days. Before heading home at night and for weekends, they always had the work site orderly, clean and secured for safety. It was extremely hot during the project and over the few weeks some of the boards warped, and others split. Not many, but enough to notice. Without ever saying anything, the guys would replace very thing that went wonky and continue on completing the project. The night before completion and after the final county inspection, I noticed a few areas where nails or screws where not quite right and the wood had checked. I wrote up a punch list to review the next day during the final walk thru. When they were ready for the walk thru, every single item on my punch list was already noticed and corrected before I could say anything. They also went above and beyond by replacing the old wood "drink rail" that was all warped on the fence surrounding the pool and enclosing the deck with a trex drink raid to match the work they did on the new deck itself. It made everything tie in and that the entire back yard look like it was always intended that way. I can not say enough good things about this team and they did the job as close to schedule as weather allowed, on budget and beyond my initial expectations. After seeing the end result, I'm not sure it would have look nearly as good even if I did it myself. I was really impressed with the quality of the work.

Description of Work
We hired Smallwood to add a multi-level +900 sq ft deck extension to our existing deck. In addition to the addition, we also asked to have the existing deck repaired/undated to match the next expansion. This was a fairly complicated project which, while I was capable of doing the work myself, simply did not have the time required to take of something this large at the current time.

Description of Work
We had Smallwood install replacement windows in our home. Keith was very responsive and answered all of our questions. While we waited for the Windows to come in he checked in periodically to keep us updated. When the crew arrived they were very respectful, professional, and took the time to answer any questions we had. During the entire process we were informed of what to expect and no promise went unfulfilled. We would HIGHLY recommend Smallwood Renovations for replacement windows or any project for that matter.

We are providers of construction services in the Richmond area. Our mission is to maintain the highest quality and professionalism from start to finish. We are confident in our results because all our jobs are custom for the needs of each home. We strive for the highest degree of quality products and workmanship. During the years in business,USA New Remodeling has satisfied many customers. It is our reputation of quality work, professionalism, and customer service our customers continue to rely on us for their needs. To understand the expectations of our customers, we take great care to work and communicate with every customer professionally. We base our reputation on service, safety, and quality. Call us today and find out how we can meet all your constriction needs!  …

here are dozens of fence companies out there, so why would anyone choose us over them? We have come to find out that many customers who have used contractors typically have bad to average customer service. Our goal at DanDale is to provide exceptional customer service! From the day we give our presentation to the day we fulfill the contract, we work to provide a great experience for you so that when your friends ask about us, then you’re glad to share your experience. Our focus is to work as a team. When our crews work with you, we encourage one another to work together to take care of our customers. We are transparent with the quality of materials, timing, and meeting your expectations as best as possible.  …

We take care of all your remodeling needs.  …

Smallwood Renovations LLC is currently rated 5 overall out of 5.

No, Smallwood Renovations LLC does not offer a senior discount.

No, Smallwood Renovations LLC does not offer warranties.