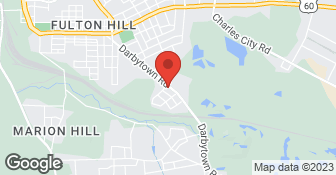 Very favorable service experience. House built 1999, owned for 18 months, first system check for us. Good Value: Learned from this service call that to run propane heat rather than heat pump, I need to switch thermostat from heat to emergency heat which I would need to do around 30 degrees when heat pump no longer can provide heat efficiently. Technician offered to price installation of a board to replace an abandoned board which would do the switching automatically. Got $10 off the service call by mentioning I was unable to print their website coupon. Called for appointment yesterday, they were available to do the checkup today. Charge is $98 for first hour. Fully satisfied.

I feel kind of neutral about them. They didn’t really help me out. I probably wouldn’t use them again. I got a service plan and it used to be a lot better, the one we had before included the Freon but this service plan only covers them coming out and looking at it, it doesn’t cover anything else. So it could be a little cheaper.

Description of Work
I use Acors & Griffith for heating and cooling.

Noticed a leak with damp ceiling in the bathroom which is directly under the indoor unit up in the attic. This happened once before when the outlet from the drain pan was blocked - could not find a blockage but noticed there was water in the pan. Also checked the outlet to the outside and this was not blocked. Was unable to ascertain what was wrong with the pan and knew I needed some expertise to fix it.

Description of Work
Had a problem with the pan under inside air handler leaking (up in attic). He realigned it and made sure outlet fully open. It had moved and was tilted away from outlet and the outlet was partially blocked. Also did a quick tune-up and added some freon. Very satisfied and will use again.

They same person has come to our house for the last five years. He comes when he says he's going to come. There's nothing they've done that I haven't been happy with. The quality, responsiveness, and professionalism are great. I will continue to use them in the future.

Description of Work
They inspected my air conditioning system and recharged it.

I got four estimates before I chose Acors and Griffith, because their price was the most reasonable. I needed to replace my central air unit, which had been broken for the last two summers. The technicians arrived on time, and were very nice and professional. When they were finishing up, they noticed that no air was coming through the downstairs vents. They went under the house, and found a litter of kittens and two grown cats. The cats had evidently torn up the ductwork under the house, probably over the last couple of years. When they told me the ductwork would have to be replaced, I assumed it would cost more money. However, one of the owners, Nowell, stopped by with the new ductwork and told me that he would not be charging me for the extra work or the materials. He knew that money was tight for me, and that I couldn't afford it. I was surprised, and extremely grateful. The technicians replaced the ductwork in a couple of hours, and before leaving, they even removed the cats and secured the opening to keep them out. Acors and Griffith went the extra mile for me, and I was very pleased. I would highly recommend them to anyone needing heating and AC service.

Description of Work
Our 16 yr.old Carrier Heat Pump Unit stopped working in the mist of the heat wave. Acors and Griffth was contacted and they promptly came to our home and gave an evaluation of the situation. They were the third a/c company we had contacted and they were the most reasonable. Their evaluation of the condition of our current heat pump was honest and they gave us options in terms of fixing the unit. No pressure was placed on us in terms of buying a new unit and they gave ample time to make a decision. No service charge was asked for this evaluation. After comparing several a/c companies we decided Acors and Griffith were the best ones for this job. The workers for Acors and Griffith were very professional and hard working and the owners came to check on the installation of the heat pump unit. The whole experience was good even down to dealing with the pleasant office personnel. I would recommend the company to anyone.

Based on his price, which was competitive with other companies, I chose not to replace my Furnance and Air Conditioner and will try to make my existing system last for a couple more years.

Description of Work
This was only a quote. One of the owners came out (Nowell) and surveyed the job. He is very personable has been in the business for many years.

The job went well and they did it all in one day. They were very nice and professional, and I absolutely recommend them. The price seemed average.

These guys were so professional and worked hard all day. They cleaned up after themselves every day. They explained everything and were helpful. Several neighbors went with them as well and were happy .

The job took about four days with two guys doing the bulk of the work, although another guy came to handle the electrical work, and two other guys came to install the thermostat and hook up the outside unit. Scott, the primary installer, was very good and answered all my questions. They worked from about 9:30 to 4 each day with only a break for lunch. It was a particularly hot week (low 90s) for early April in Virginia, nevertheless they got right to the job. Most of their time was spent in the attic, although they also spent time outside in the yard putting together the duct work to be installed. They laid down plastic each day to protect the floors where they were having to enter and exit the house and cleaned up each afternoon. Scott also removed an old central vacuum unit that was taking up space in one of my closets. I was very satisfied with the job they did and would use them again.

They are excellent. They came here on time and did a wonderful job. They installed everything very quickly and were very responsible about it. The price was very competitive and the service was friendly. I thought that it was going to take them longer than it did, they finished quite promptly. They did their job perfectly and I'm very satisfied with them.

Description of Work
They installed a heat pump for my first floor which is 2500 square feet.

Residential and Commercial Heating and Air Conditioning Class A Contractor serving the Greater RVA. Fully licensed and insured. Specializing in Maintaining, Servicing, Repairing, and Installing all brands and types of HVAC systems including but not limited to: Air Conditioners, Heat Pumps, Boilers, Furnaces, and Water Heaters.  …

We are Professional HVAC Company , Family owned and Operated, with over 20 Years of experience, with Heavily Background Checked Technicians and Installers, Drug Free, Licensed in Virginia, with extensive training. GIVE US A CALL AND EXPERIENCE SUPERIOR SUPER SERVICE!  …

How is Acors & Griffith overall rated?

Acors & Griffith is currently rated 4.8 overall out of 5.

What days are Acors & Griffith open?

No, Acors & Griffith does not offer eco-friendly accreditations.

Are warranties offered by Acors & Griffith?

What services does Acors & Griffith offer?