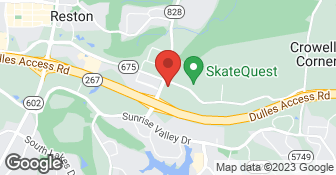 Family owned and operated. LAND SURVEYING and Land Planning in Virginia and the Washington DC Metro for over 20 years.

Utterly unprofessional, disrespectful, and to be avoided. These people cannot be relied on. I have had CRES Surveys perform surveys for my clients in the past, and I recently ordered another survey from them. They said they could get to it in the next few weeks, and would contact me to make arrangements. After waiting several weeks, I called to check in and see if they had an idea of when it might be done, and after sitting on hold for several minutes, the person on the phone said that they had "decided not to do this survey." When I asked why, they said that "it was not going to be financially advantageous," with no other explanation, which makes no sense at all. I have employed them to do similar surveys in the same neighborhood before. All of this with no communication with me.

READ CAREFULLY. First of all, CRES Surveys has no affiliation with Angie'[Member Information Removed] List yet they allow this person to write an unfavorable review on this site. Angie'[Member Information Removed] list did call to tell me that I could buy a subscription at a fee of $5400.00 per year and add 5 "fake" positive reviews to offset this review. As far as Mr. [Member Name Removed] is concerned, you can see that we did not work for him. We have worked for his clients. I don't see any negative reviews here from them. Be forewarned of Mr. [Member Name Removed]. You do not want to have him for a client. He would not accept our "No thank you" to work for him. That'[Member Information Removed] a whole lot of sour grapes.
5.0

Very, very well. Called Alan on Thursday, the survey team arrive the following Monday and I had the survey in hand just one week after I called. Terrific service.

Description of Work
Needed a survey to be used for zoning approval for an addition.

This company was recommended to me by a title co. to survey my property in Arlington, VA. I was quoted $350 for plat survey and $300 to mark the corners for a total of $650. I was hesitant about the corner marking, but the guy from CRES told me $300 was a discounted rate for marking the corners, and that if I came back later to have it done separately, it would cost more. I've never had a survey done and know little about them, but the whole discount for marking the corners thing sounded like a "hard sell". it spurred me to go to Angie's List and contact a highly rated surveyor. I was quoted $350 total for both the plat survey and the corner marking and went on to have a great transaction with that provider who was professional and friendly. The "F" rating for price is obvious, and the "C" rating for professionalism is for the b.s. "discount" on the corner marking.

Hemax Construction Services & Landscaping LLC is a landscaping company offering a wide range of home improvement services in Northern Virginia. We believe that each landscaping project is a reflection of our client’s personality and an extension of their home. This is why we always involve our clients in every decision we make by communicating with them throughout the construction process. For more than 15 years, we’ve been creating outdoor spaces tailored to the needs of clients. They love that we pay close attention to details, and provide prompt customer service, reasonable pricing, and personalized landscape services. **Please allow 24-48 business hours for a response to your inquiry.** Additional phone - (703) 481-0020. See website for additional services. Award wining. Additional email - sales@hemaxlandscaping.com.  …

Visit our website to request your free in-home estimate today! Phoenix Home Services is a locally owned and operated turn-key construction company servicing the Northern Virginia area. We have been in business since 1985, with many beautiful projects under our belts. Our committed and tight-knit team is fully capable of projects as simple as a small patio installation, to larger jobs such as full house or business construction, and everything in between! As a general contractor with years of experience installing complex projects and strong ties with the area's suppliers, Phoenix Home Services is a sound choice and good value for all your home improvement needs. From building a custom screen room, to renovating a basement… Let Phoenix breathe new life into your home!  …

How is CRES Surveys overall rated?

CRES Surveys is currently rated 4.1 overall out of 5.

What days are CRES Surveys open?

No, CRES Surveys does not offer a senior discount.

Are warranties offered by CRES Surveys?

What services does CRES Surveys offer?