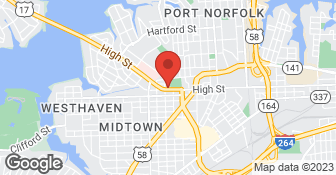 G H Appliance Repair has been serving the entire Hampton Roads area for more than 17 years. We now service from New Kent County to Virginia Beach. We are a locally owned and operated business that has customer service as our #1 priority. All of our repair work is guaranteed, and we make sure all work is done right the first time, every time. We also carry parts in our trucks to ensure fast, efficient service. Whether you need a refrigerator repaired or a dishwasher installed, we are the business for you. Call us today to set up a service appointment.  …

Atomic Plumbing has served the Hampton Roads area for over 49 years and is your first call for commercial plumbing in Virginia Beach and Norfolk plumbing needs - residential or commercial. If you have a leaky pipe or drain clog, or wish to install new bathroom fixtures, Atomic Plumbing can help. Our plumbing team is certified and trained to tackle any sewer or drainage problem, using the latest equipment to repair frozen or damaged pipes or faulty water heaters.  …

Contracted with this company to install granite countertops in a house I am renovating. 10 appointments later, still not right. This company does not value their customer's time. I have several houses being renovated and setting up appointments to meet people consumes a great deal of my time. To have to do this 10 times for a job that should have taken 2, maximum 3 appointments is incredibly frustrating. I contracted with them right before Christmas. Hal was my sales person and he's tried to remain upbeat and friendly throughout this whole ordeal. For the first appointment, when the installer came to measure, I asked them to bring out 3 samples to the property so I could see what they would look like in the kitchen. The installer brought 2. (Appointment 1) When I asked for the 3rd one, he was supposed to meet me at a certain time the next day. (Appointment 2). Instead he called an hour earlier and said he was 5 minutes away. (This became a common theme) I was unable to drop what I was doing and so he just left it on the front porch. The first installation appointment was rescheduled at the last minute for the next day. (Appointment 3) We were supposed to meet at 1 for the install. Instead, the installer called me at noon and was "5 minutes away". I rushed to meet him. (Appointment 4) During the initial install, he placed two lineally patterned pieces at a 90 degree angle to each other where there was an "L" in the counter. No granite installer who cares at all about their work would expect a customer to accept this.(Photo 1) I told him it was unacceptable. He left those 2 pieces there and took the rest. I then had to go back to the property the next day and meet the sales person, Hal, on site to see it. (Appointment 5) I suggested that a diagonal seam be employed to join the 2 pieces. Was told the owner didn't like to do them but they would see what they could do. The next install appointment, (Appointment 6) the installer did install the granite with a diagonal seam as requested. I was unable to be on site the whole time and he left it with epoxy not sanded smooth, and a ridge where the 2 pieces joined. He called me and said if I didn't like it he would come back. Additionally, one section of granite was installed with a 1/4 inch gap between the stone and the cabinet. (Photo 2) He also didn't see a problem leaving it the way it was. I requested that piece be recut and the seam on the other pieces smoothed out. I had to meet Hal on site so that he could see what the issue was. (Appointment 7). Then, for some unknown reason, when the installer came back out, he came to "see" it, not to fix it. (Appointment 8) I questioned the purpose of the appointment because it was exactly as he had left it. No response. (Appointment 9) He installed a new piece of granite where there had been a gappy one, and smoothed the corner seam. (photo 3) I *thought* we were done. I paid the balance and received a receipt showing a charge for a piece of granite behind the kitchen sink. There was not one, it was not needed with the sink we used. I called and asked for a refund for that section. About a week later, I was adding the tile backsplash and discovered that the granite on one side of the sink was lower than the other side of the sink by 1/4". (photo 4) It should have been shimmed to be level. I called the owner and he agreed to send out another installer. I told him I wanted a partial refund for all the trouble. He said he would come out with the installer if he were able and we would work something out. (Appointment 10) January 25th - over a month after I ordered this granite, there was the final appointment to fix this latest problem. The owner came out with the sales person and another installer. They stuck wooden shims under the granite in the 2 rear corners. It raised the height to level with the other side. They confirmed with me that it was the correct height. I agreed. After they left I pushed the sink back into position and realized that they did not raise the front. The sink rocks back and forth now, as the granite slab sits higher in the back than the front.(photo 5) Unbelievable. We are going to get someone else to fix this mess, and despite their competitive pricing on granite, we will not use this company again. The discount is not worth the hassle.

He was very receptive of our ideas. he took our ideas and made a budget for the project

Description of Work
Brad gave us some ideas for our kitchen remodeling.

If I liked the presentation I would be willing to go ahead with the project but since they did not give me enough to satisfy I just let them go. I think they showed me some samples, some cabinets face door. What I would want, if they make suggestions then I would want, but I think they were priced too much; expensive.

Description of Work
I used APPLIANCE ENTERPRISE for a kitchen consultation.

Nice people that went above and beyond to make sure the job got done quickly. Wish more companies operated like this!

Our designer, Matt, was wonderful and very patient with us as we changed original plans or called to ask questions. Added a breakfast bar in the middle of construction without even blinking! Cabinets have soft close drawers and under cabinet lighting which we never expected to get in our budget. Our experience was wonderful and we could not be more pleased with the finished product!

Description of Work
Kitchen was completely gutted and replace. Moved refrigerator to another location and ran water line. Moved sink center with kitchen cut-through. Installed brand new cabinets (beautiful!) and added crown molding to finish them. Granite countertops with beautiful cut edges. I had 7 different quotes all for more than 18,000 for this kitchen and most were only to refinish the existing cabinets.

The installers made a error during the initial install by drilling a faucet hole off-center. Their attempt to reverse the error with a repair did not produce the intended result. (Almost all natural stone has repaired surface flaws on delivery, but you have to search to find them.) That the repair was at the faucet base, a focal point for the user's eye, made it all the worse. I was displeased. Within an hour Brad and his crew called to say they would replace the install and two days later they made good on that promise. What a pleasure to do business with a company that appreciates quality and craftsmanship, and goes beyond the norm with their customer service. These folks aren't happy until their costumer is outrageously satisfied. That's rare, and I recommend you see for yourself.

Said he could not remove the old counter top.

Hello , In response to your review, I am sorry that we were unable to install your countertops, however it was mainly because of the age and condition of your current cabinetry which was not in a condition to support the weight of granite countertops. Additionally, the removal of your full height backsplash connected to your current laminate countertops is what would of caused damage and would have required new drywall and additional costs. Perhaps there was a misunderstanding regarding the reason why we couldn’t safely perform the installation , however we felt we offered you prompt, professional and even next day service. For your safety, we could not perform an installation that would not be structurally sound and /or incur additional cost beyond what was presented in our Angies list offer. Furthermore, we promptly provided you a full refund. I hope you can reconsider our grade of a " D" since there were additional reasons, structural, drywall and safety concerns that prevented our company from being able provide you with the service you requested.
5.0

The service turned out pretty good. We are still in the process of having the actual plan drawn up, but the $49.99 for consultation fee, it was a good Deal. They came out about a week after we purchased the Big Deal because we had to get the schedules correct, my work schedule and when they are going to be available. There were no extra charges to the Big Deal and no commitment to purchase or buy anything. They are customer-oriented. The one we are working with is Lindsay and she is very organized and professional. That means a lot when you have somebody who is customer-oriented. I would have to know a little more about what other people charge for that service, but just looking on Angie’s List, I think it was a fair price for what they gave. The quality was good. She said that she was going to be out here at a time and they were here.

Description of Work
We purchased a Big Deal for Appliance Enterprise. They came out and gave us a consultation for our bathroom.

They did great. We will use them again. They are honest and trustworthy.

Appliance Enterprise is working with us on remodeling our kitchen to include developing a redesign, choosing materials, and appliances. Matt, our designer, has been awesome! We can tell he really takes a lot of pride in his work. Brad, the owner, has been very nice. And Beth has been very helpful with choosing appliances. The work is to include tearing down one wall and removing the existing soffit in our kitchen. We have not begun work yet because we are attempting to finalize design and costs. I will update my review once the work is completed.

Appliance sales and service. Kitchen and bath remodeling and design.