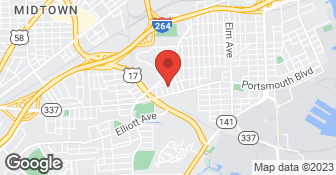 Horrible. He started off really good doing the demo, however after the demo was completed, the job still seemed to be going pretty well. The room that was getting tiled went down really good and the guy he brought in was awesome. He was a little slow but then he walked out on the job before he had finished grouting it. At this point everything went down hill from there. He does not have qualified employees that work for him so the job was to big and it quickly showed. This contractor (Owner Mike Pineda, personally laid the hallway floor) laid a porcelain wood style plank floor which was laid completely wrong. None of the grout lines were even the cuts were all crooked and hacked up. They did not have the proper wet saw to make their cuts so the entire floor was a disaster. Wood floors are suppose to be laid in a stair step random pattern and this was not. At the same time they were laying the floor tile he was also installing ceramic in a bathroom which was not framed properly and the tile looked like someone put them up with their two feet. He picks random people up off the street and brings them to the job site with no experience which is also a safety concern when he is working at an individuals house. I had to bring another contractor in and the whole floor is currently being pulled up which I now have to buy materials a 2nd time. I am currently in contact with the Board of Contractors to see what my options are. He did not even know how to use wall spacers correctly. The pictures below tell you everything. There were numerous other issues which I could list but I think this gets the warning across to others looking for a qualified contractor.

Description of Work
The job was to lay ceramic tile in a hall way. , condo and tile some bathrooms.

The worst, most unprofessional contracting job I have ever received. Prior to the start of the job, we contacted the owner, Mike Pineda, to verify that the removed wood would be taken from our property. He said, "Yes". We would not have hired him if he said otherwise. WE had to go buy all of the materials. However, he went the next morning to buy the screws we requested but he did the project with nails instead (from work we had to call Lowe's over the phone to give our credit card number, because he couldn't/wouldn't cover the cost until we could reimburse him). When we arrived home, we saw that the job was almost completed by two of his employees. Soon after, Mike came in a minivan asking us where we wanted them to put the old wood. Our natural response was, "You said you were going to take it away". HIS response was, "I never said that"! Of course, an argument started, and he still refused to remove it. He and his employees proceeded to take the wood to the street then left our property with all but $60 of the payment that we withheld in order to finish the project. We were further disgusted upon seeing the deck close up. For one, the skirt lattice was not completed. Secondly, not all of the deck boards were nailed thoroughly. And the worst discovery was the quarter inch gap between the banisters and the lower railings which were put on upside down! Oh yeah, can't forget to mention the board they split on the step, nor the misplaced banisters on the stair rail. Today we are going to tear down all of the railing and replace it ourselves. Wish us luck! Our advice, NEVER call a.m.p. Construction for any project!!!!

Description of Work
Was to replace a few wooden deck boards and railings.

Here at R&R custom painting we specialize in exterior and interior painting. We take pride in the work we perform, while delivering great customer service! We have over 10 year of experience and are owner operated. Call -or- click to schedule a free estimate today!  …

Insured
All statements concerning insurance, licenses, and bonds are informational only, and are self-reported. Since insurance, licenses and bonds can expire and can be cancelled, homeowners should always check such information for themselves.To find more licensing information for your state, visit our Find Licensing Requirements page.
General Information
Free Estimates
Yes
Eco-Friendly Accreditations
No
Payment Options
Check
Senior Discount
Yes
Warranties
Yes

How is AMP Construction overall rated?

AMP Construction is currently rated 1 overall out of 5.

What days are AMP Construction open?

No, AMP Construction does not offer eco-friendly accreditations.

No, AMP Construction does not offer a senior discount.

Are warranties offered by AMP Construction?

What services does AMP Construction offer?

Are there any services AMP Construction does not offer?