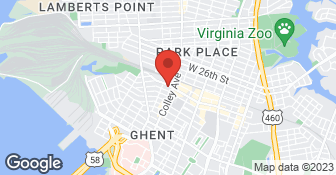 Excellent! I will continue to use Norfolk PC-FIX for my computer repair needs and would recommend to everyone.

Description of Work
This is the second time I've used Norfolk PC-Fix. This time I shut down my desktop computer due to expected thunder storms and when I went to start back up, the computer wouldn't start. I called and Tork Erol said I could bring in my tower that day. By the next day if was fixed - new motor and some repair to the motherboard - and I was able to pick it up. What a relief as it had been a while since I'd backed stuff up.

I took it to Tork on Friday afternoon and had it back the next day. It works wonderfully. Tork is quick, professional and reasonable. I would definitely use him again.

Description of Work
My desktop computer slowed to the point of being unusable.

Toth is a computer guru, as well as a patient gentleman. Exceptionally generous with his time and knowledge. Provides his best for each and every client, regardless of their level of computer experience, age or gender. The BEST!

Tork is quick to respond to a service call, and he has very good customer service skills. He fixed our problem quickly. He also explains things well. We will always call on him for help

My computer would not turn on, so I contacted Norfolk PC-Fix. When I brought the laptop in the next day, he diagnosed the problem while I was there. Both hard drives have failed and will need to be replaced. He was able to replace both hard drives and recover all files by the next day. Once I brought the laptop home, I experienced an issue with my CD drive that he was able to fix remotely.

Tork met me and took my laptop to diagnose the problem. He called me w/in a couple of hours for the diagnosis. My motherboard had to be replaced. Since it was late on Friday and he did not have a board at the time, I had to wait until Monday. I received a call early on the following Monday and went to pick up my laptop. He does not charge to diagnose the problem, plus I had a diagnoses w/in a couple of hours of dropping off my laptop, unlike everyone else that I called before checking on Angies’ list where I found him. Some wanted at least $85.00 to diagnose and they would not even look at it for at least 3 days, where Tork was much more accommodating and customer friendly. On another note, shortly after this my stepson’s business computer crashed he called me and asked me who worked on mine. I put him in touch w/Tork and Tork immediately helped him and was able to recover and save his very important info. His problem was worse than mine and Tork was able to assist him and get him back in business very fast. He had to do much more work on his system than mine. I was very satisfied and would use him again and would definitely refer people to him.

Description of Work
Diagnosed and replaced the motherboard on my dell laptop. Updated me from Vista to Windows 7 and installed a virus protector.

Tork was awesome! I went to a reputable dealer at a military exchange and was treated like I was using a used car and the price kept jumping up at every turn without them even checking out what was really wrong. They wanted 7-10 days. I called Tork via Angie's List. He responded in less than an hour and we set up a time for me to drop it off. The computer was fixed within hours for a VERY reasonable price. He fixed what needed to be fixed not just a blanket fix to make more money. Later, I had another problem (not due to Tork). He responded within minutes to my email. He took the computer and fixed it giving me an AL's discount. For both jobs, it was still cheaper than the supposedly trusted contractor at the military exchange. HIGHLY RECOMMENDED.

Tork returned my phone call very promptly in Feb 2014 when I contacted him. I work from home and had an urgent need to get my pc repaired. He came to my location, diagnosed the problem, explained what was wrong, fixed it, and helped me acquire better spyware protection than I previously had. We called him again in April 2014 to help my husband with his pc issues. We will always call him again when we need help!

Description of Work
repaired personal computers in our home

I found them to be very receptive. He was very quick with turn-around time and very personable. And the pricing was really good.

Tork showed up at the time he committed to, told me exactly what the cost would be, took the new printer and four computers with him to his shop and returned all 24 hours later, as promised. He was on time, and all machines worked better than anticipated. When he encountered hard drive issues, he called me and told me exactly what the issues were, costs involved and what my options were - leave em in, and they might last several more months, or they might fail next week. I chose to replace both. He was very professional, polite, exceeded my expectations, andit was a genuine pleasure to do business with him and his assistant. I highly recommend Tork. Very seldom do I give top ratings (5 out of 5) to anyone, but in this case, it is warranted. I have dealth with a number of "computer geeks" repair organizations and network "experts" and none can come close to the service and the positive experience I have had with Tork Erol and Norfolk PC Fix.

Description of Work
Tuned up four computers, replaced two hard drives, upgraded the operating system on one computer from Vista to Windows 7, set up wireless printer on home network and made sure all computers on home network could se printer and printer was properly shared and functioning on all machines

Experienced Technicians with over 20 years experience in computer field. We service you in your home or office. We offer service to government, private and public customers. We service small to mid size companies. We offer sub-contracting, special promotions and financing for businesses.  …

How is Norfolk PC-FIX overall rated?

Norfolk PC-FIX is currently rated 5 overall out of 5.

What days are Norfolk PC-FIX open?

No, Norfolk PC-FIX does not offer a senior discount.

Are warranties offered by Norfolk PC-FIX?

What services does Norfolk PC-FIX offer?