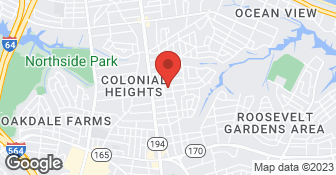 I provide fast and free estimates. Payment is due at end of services, cash or check only. Ask for Tim Edenburn, Mason Meyer or Harry James...

the work was fine, but he was supposed to get return to give me a quote on some additional leakage and he never contacted me or returned my calls.

B-Square Home Improvements installed replaced an outdoor ceiling fan that went bad with a new one that I had already purchased. The installation went well. Ceiling fan is still working great about a year later. Great prices. Hired them for additional work around the house. Unfortunately, I haven't been able to get in contact with them for more work around the house.

The deal worked out but I did have to have them come back out to balance the fan.

Description of Work
I purchased a Big Deal for Ceiling Fan Installation.

The corners were not great and they used the molding to make it look great. They did the flooring and it took longer than we thought. The additional hours were that same rate as the big deal. They were nice guys and they work together well. They were nice around me and my children.

Description of Work
They were great.

Very difficult to get a hold of to schedule appointment. Some items were too costly - cost based on time not flat rate for installation - cost $150 to install closet door. Did not remove debris.

First it was a delay in the bathroom tiles that was ordered through Lowes ( no fault to the contractor (Tim)). Stayed constance contact with Tim when the order had arrived for pick up, Once the title arrived contacted Tim. But before I got into my disappointment of Tim, I want to pass on kudos to James who worked the hardest completing the major project?installing three bathroom tiles pretty much by himself. Major issue I had with Tim and his crew was punctuality. When I was told on the 29 Sep on what time he will pick up the title from Lowes and arrived at my residence was 9-9:30. Well Tim didn't arrived until after 1:00pm . I had to contacted him to find out his whereabouts and I was told about his delayed. When he arrived, again another mixed up in order to begin work. It was a miscommunication on his part which cause another delay in work. I could go on and on about my dissatisfaction in Tim. But what I will stay my project started on 29 Sep and didn't complete the project (s) until 9 Oct, at which I still have a few unfinished work in the last bathroom. I contacted him on the 10 Oct via texted and to date I haven't received a response. Now it's 22 Oct and Tim haven't returned my text nor has he contacted me to make sure I was completely satisfied. From the beginning 29 Sep, my residence was left for several days of a family of four using 1 bathroom. From the time he started, Tim was never on time and when he arrived late in the day, he only spent several hours on the project. The only time he spent from more than several hours was on 9 Oct when he was working on the last bathroom and wanted to received his final payment. Several times, Tim left the residences and left one or two of his team to work. I will stay James and Scott worked very hard but yet I was still unhappy with the length of completing my projects. All of the workers smoke and of course they smoke outside but left their butts on my premises. They cleaned up their work/materials but not their butts. Very friendly and nice guys, but work time spent could have been completed sooner and punctually was very poor! I was considering requesting his services again, but I decided not to.

The company contacted me through the messaging center on Angie’s List initially. He left a few messages, and I always got in contact with him the next day and then I would never hear from him. I was never able to actually speak with him about setting up a time to come out and look over the things that needed to be fixed. After a few weeks of playing phone tag I never heard from him. He finally contacted me and said he would be by this morning but he never gave a time. When I called the number, it said this number couldn’t be completed as dialed.

I had much trouble contacting and making appointment. Tim (owner) said he was training a new office gal and it wasn't going well. When did arrive, brought another man with him. Worked rather slowly but meticulously. When finished, discussed future jobs. Tim said he was a Master Electrician and that he and his workers could do everything from removing old furniture and repairing driveway cracks to painting, electric, carpentry and just about anything & everything I might need done. I told him I would like to use him again but asked if it would be easier to contact & set an appointment in the future. He assured me it would, but when I asked him for a business card with contact information, said he didn't have any. He also has no web site or means of e-contact other than through Angie's List. His only phone # is a personal cell phone. Called this number to set an appointment to paint newly hung door, install an outdoor light fixture and indoor fan light and discuss a series of future jobs. He gave me an arrival time of 1 p.m. on October 16, but asked me to call back as soon as we finished our conversation and tell his voice mail the date, time, address, etc. He has no office staff. By 2 p.m., when he still had not arrived, I called the same cell number to see if he intended to come. The phone was either out of service or my call was blocked. When I called Information to get a number under his name and address, there was no listing. I left an email message via Angie's List service and received no response. He neither showed up nor called to explain/reschedule. Tim is a very nice and talented man, but operates in a disorganized, unprofessional manner. If he would handle his staffing and communication/scheduling issues, I'm sure he would be very successful.

We signed up for the Angie's List deal for a $49 ceiling fan installation. I thought the price was too good to be true from the beginning, and I was right. The provider was not available for any of the days we requested when we bought the deal and took over a week to contact us by phone to schedule an appointment. Then, no one showed up for the scheduled appointment. We sent an Angie's List message and left a voice message on the business phone line to follow up, but neither message was returned. Eventually had to contact Angie's List to get a refund. Would not recommend buying this deal or dealing with this company at all.

They never came out to do the work.