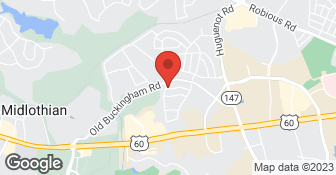 Over 20 years ago, Rob Hetrick, owner of HPI, began a small painting company to help support his growing family. He made sure he always took the time to recognize exactly what the client had in mind and to understand all their expectations. If there was something that a prospective customer wanted that he was unsure of, he went out and learned the process completely before committing to the job. After more than twenty years, Rob has gained a vast knowledge of the painting business and keeps himself updated regularly with the improvements in both methods and product in this ever-advancing industry. Rob keeps his crew learning, too, and also tries to educate potential clients with this information as it pertains to their individual job so that they, the customer, will have a fuller understanding of what he and his crew will be doing. Additional phone - (804) 745-3822, (804) 762-0468. Additional DBA - H P I. Additional email - drhetrick@aol.com. Award winning....

Rob came to the house right away to provide an estimate. He said he would put us on his schedule to be done in two weeks. Three weeks later, I called him because we had not heard from him. He did not offer an explanation or an apology, but again put us on his schedule to be done in a couple of weeks. It has been more than a month and I have yet to hear from Rob. Not that it matter, because I have since hired someone else do the job; a professional who did it when he said he would and he did it well (R & B Painting). Had Rob been upfront with me (telling me that he had higher paying jobs he fully intended to do first), I could have had my painting done months earlier. This is rude (quite selfish actually) and unprofessional behavior.

Easy to talk with and very quick to return calls. Pressure washing job went very well. Deck staining also looked good. Downside was that the quote looked low based on his basic labor charge, and he added material and repair afterward. That made the price 2.5x the quoted price, which gave me some sticker shock. I would prefer seeing the bottom line price upfront. That being said, it was my error and the work was good. Just make sure you understand the true price before you sign.

We were pleased with the job that Hetrick Painting did. Rob Hetrick came out quickly to give us a quote. Once we chose the stain color the work proceeded quickly. The deck looks much better than it did and is safer. Please note that the quote we received was for the labor only. The cost for the paint and other materials were then included in our final bill.

Description of Work
Back deck refresh including small repairs, cleaning and staining

Excellent. No problems. It was a good price. Everything is good.

They did a great job and paid attention to detail. I would highly recommend them and I would hire them again.

Description of Work
They painted the trim outside and a room inside of my house.

Very prompt and professional. When my old paint wasn't still suitable the painter went out and purchased another gallon and passed on their discount to me. He was able to paint the wall and ceiling above the stairs which is tricky (hence why I called them) and did a very good job. He also was able to sand and caulk around an old window for painting.

Description of Work
Painting of wall and ceiling

Painted walls, ceiling and trim on 2 levels of our home. Abraham and his crew were very professional and precise in their work. We had our wood floors refinished after the painting was completed and Rob promptly sent back a painter to touch up the baseboards and walls. We are extremely satisfied with the quality of their work. We also had our maple kitchen cabinets painted white and they look great! Their price was very competitive.

Rob and his workers were always responsive, always on time, and always professional. They came back out to touch up after the work was done. Very pleased with the results.

Deck was fine, so was power wash. Workers left trash and never put planters back like he said they would. Owner said fence repair would begin around aug 24. When they didn’t come, he never responded to my texts. Overall, very unreliable.

[Member Name Removed], I want to take responsibility for my lack of communication. I thought I had sent you the information you had asked for earlier and by the time I realized it hadn't gotten to you, I was out of town. Upon returning I was dealing with my elderly parents with my dad having an operation and my mom's dementia. Unfortunately, you were impacted in all of that as I hadn't yet put something in place to cover the business side while I was distracted with my family. So there is no excuse for my lack of communication and I want you to know this is not how we feel we should conduct business. I hope you'll except this apology and I would like to extend a credit towards any work if you would still consider having us in the future. If you would like the information for the fence, I can still send that and make you a priority. You have been such great clients and I value The trust you have had in us in the past. Thanks, Rob
5.0

We are very pleased with the work performed by this company. Employees were courteous and very receptive to any suggestions we may offer. The work was highly professional, finished on time and on budget. We were very pleased with the finished product which exceeded our expectations. We have more painting projects in the near future and will definitely contract with this company. To anyone looking for a company to do work for them, I highly recommend this company.

Description of Work
Our deck needed pressure washing and sealing.