Snow Removal
Fireplaces
Stone and Gravel
Masonry
Lighting
Lawn Irrigation
Fencing
Excavating
Decks and Porches
Licensing
Insured
All statements concerning insurance, licenses, and bonds are informational only, and are self-reported. Since insurance, licenses and bonds can expire and can be cancelled, homeowners should always check such information for themselves. To find more licensing information for your state, visit our Find Licensing Requirements page.
Business Details 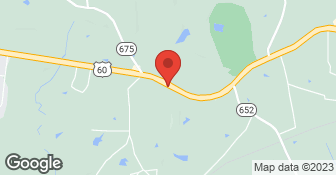 At Commonwealth Curb Appeal, we specialize in the Design, Installation and Maintenance of Outdoor Living Spaces. Our Designs include, but are not limited to, features such as paver patios, driveways, walkways, outdoor kitchens, fire places/pits, water features, retaining walls and a whole lot more! If it's stonework, we can do it...that's why our motto is, "Value...set in stone." If you know someone that is interested in an Outdoor Living Space please let us know. At CCA, we are never too busy for you or your referrals!...

Friends and Family Landscaping provides landscape services to the Richmond, VA metro area. Our design and installation services can deliver the landscape you've envisioned, with available customer service throughout the process. Already have a great landscape? We have maintenance services for residential and light commercial properties.

Offering masonry services in the Chester, VA area. Contact us today to discuss your project.

2014, 2015 and 2016, 2017 and 2018 Super Service Award Winner in Richmond Lawn & Yard Work. We are a small personal company but give a big company results in you experience. We offer online payment options and have a Customer Satisfaction Guarantee. Insured and license Lawn Company in the Richmond area for commercial or residential areas. www.rvalawncare.com for more info.

We did not end up signing a contract, but not until after weeks of lousy interactions. This place has decent prices, but zero flexibility and no military discounts. Even so, compared with other quotes we got, theirs was better. But they were INCREDIBLY frustrating. First asking "when I could come in" to sign the contract. I didn't realize until I was on my way out the door that their office is VER...

Josh and his crew are extremely responsive and cost effective. I first met Josh several years ago, when I requested a quote for a concrete or paver driveway. I never went that route, however CCA delivered and spread driveway gravel on two separate occasions. Recently, I asked to have some topsoil and pathway slate delivered. The price couldn't be beat, and the turn-around time of the request was v...

DESCRIPTION OF WORK
For this instance, delivered slate and topsoil. Previously has delivered and spread gravel for driveways.

From the first time I met Josh, the owner, it was a phenomenal experience all around. He was insightful, creative and passionate about his work and it was obvious. I had about 5 other contractors to the house to help me with ideas and NONE of them, I repeat NONE of them offered any ideas much further than and quot;we can do whatever you want.and quot; There was a lot of confusion as to just where ...

DESCRIPTION OF WORK
Built a paver landing for my grills, and a destination patio in our backyard.

We really have nothing positive to say. We didn't realize they used plastic after the entire job was done. They broke our fence and sent somebody to repair it. We have been trying to repair it ever since. The guy they sent did not repair, and it is still broken like before, which is frustrating. The top piece of rock on one of the steps is loose, and they came back to redo it a couple of times, wh...

DESCRIPTION OF WORK
I hired Commonwealth Curb Appeal for some landscape work around two years ago. We were specific in putting the metal edging; but they put in the plastic. They build the steps, and they planted some plants.

We started on the 9th just as they had promised. They laid out the design and went to work. Once we had the tile laid, we were worried about the amount of space for a fire pit. They suggested another circle which we went with. I can't tell you how nice it looks. The patio was finished in two weeks time and is exactly what we wanted done. I know we are going to enjoy it in the years to come.

DESCRIPTION OF WORK
We needed a patio in the backyard to go around a pizza oven. We also wanted an area for a fire pit. They worked with the stone in the pizza oven and the colors are wonderful together. They sodded in the areas where they worked so it looks like it has always been there. They gave us a time frame and stuck to it. We were lucky that it didn't rain because I'm sure that could cause some delays. They were prompt and thorough. I loved the amount of detail they took time to achieve and were very receptive to our needs. They followed through on all details as well. All of the employees were hard working and nice people. If we had questions, they always took the time to listen and take care of those concerns.