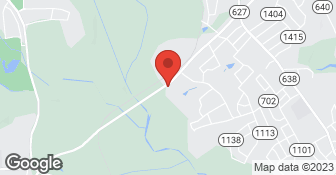 Hill Electrical has been in business still 1968. A fully licensed Class "A" electrical contractor with 52 Empleyees....

We have the experience and dedication to bring your dreams to reality! Specializing in Electrical Services, we guarantee your satisfaction, and we won’t leave until the job is done right. We pride ourselves on the quality work we provide, while delivering great customer service! Call or click to schedule a free estimate today!  …

If you are seeking for quality help to complete your next project; J Carter Electric is your trusted source. I am a licensed electrician here in VA. Also; if you need help with cleaning and minor landscaping projects; I am at your service. Debris removed; construction demo and/or cleanup.  …

They were very prompt, polite and cleaned up their work area.

Description of Work
I used Hill Electric for electrical service.

When I called, the receptionist was very courteous and helpful, and was actually able to give me a next day appointment with a specific time that the crew would arrive. They arrived even slightly before the scheduled time, and were also extremely courteous and professional. They listened to the specific problems that I had and things that I wanted done and delivered fully. It took a fair amount of time for them to determine exactly why the kitchen outlets were not working, and it turns out that they were initially installed poorly when the house was built and were interconnected with a dining room circuit that was also out. I total of 10 outlets were non functional. I left for work and felt comfortable leaving them with my wife while they finished the work. It took most of the morning for them to troubleshoot this complicated problem, and I was frankly shocked when I received a bill for only $325 for that amount of work. With electrical work, I am willing to pay for the peace of mind knowing that a professional has done the work, and I would definitely use Hill Electrical again.

Description of Work
Hill Electrical, (804) 746-3122 in Mechanicsville, VA, performed home electrical work including troubleshooting a repairing 10 electrical outlets in the kitchen and dining room and installing a new outlet in the garage. We had a 3 non-functioning outlets in the kitchen which ended up being part of a bigger problem related to the construction of the house. The outlets now function perfectly and the new one in the garage is for a second refrigerator that I wanted on a separate circuit.

We offer Residential, Commerical, and 24-hour service in the state of Virginia and the D.C. area.