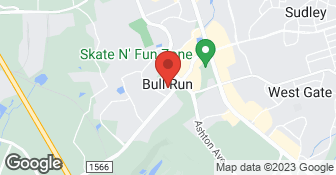 RJA Floors is proud to serve the VA/DC/MD metropolitan areas! At RJA Floors, we understand home improvement projects can feel like a major undertaking. Offering quality service and dependable craftsmanship, our priority is to make your remodeling experience pleasant and hassle free!...

I am pleased with the work that was done

1. Quick response to my request for a Quote. 2. Quote supplied within 48hrs. 3 Very fair price for work. 4. Item list of work: A. Remove all the paneling off the walls in basement. B. Tear out old 1x1 fir stripping holding paneling to cinder block wall. C. Remove all the metal junction boxes (they were all rusted). D. Inspect/replace as needed 12/2 gauge wiring. E. Haul away old materials. -------------------------- F. Properly framed out 2x4 wall construction against the cinder block foundation. G.Insulate the 2x4 framed walls. H. Apply vapor barrier. I. install new plastic (not metal, as they will rust) junction boxes and receptacles. J. Sheet Rock, mud, and finsih. K. install face plates on outlets. L. Paint all the walls. M. Cased in/out windows and slider door. N. Built two in-corner wood stands/covers that covered the sump pumps (sump pumps not part of this job). RJA is one of the absolute best contractors I have ever hired. I used to build homes with my father as a young man, and currently own several rentals homes, so I have gone through many contractors. RJA is outstanding. Dan Howard

I hired Robert to paint my condo. He did a decent paint job; however, I was less than impressed with the service. Upon first contact, I received a quote based on my square footage but Robert said he would need to come by to see it to give me an accurate estimate. At this time, he said we would also go through his 'book' of samples/swatches so we could discuss what would work best. I thought Great! This will be awesome as it's exactly what I need along with needing to discuss other possible work in the condo to be done. On the scheduled date, Robery 'forgot' we were supposed to meet and didn't. No call or show. He later said he had a dr's appt that day. Fine. He said he could come by the next day same time to go over the same thing. Next day, same situation - no show, no call. I was livid and he said he forgot again and misunderstood our meeting. We had planned for him to paint on Thursday but we had discussed and agreed to meet prior to to plan it all. Robert did not recall this conversation and said I needed to pick colors on my own. W**?! that wasn't what we discussed nor had I planned this into my schedule to do in the next 8 hours before home depot closes. As a result, I picked from their website. Big Mistake! Obviously, the colors are off based on screen resolution and I now have a yellow color that I didn't want throughout my home. Robert's only response was that he has yellow and many colors in his home and completely ignored that I wanted something different. Overall, for what he ended up charging me, I wish I'd just painted it myself or went with personal referrals instead of working with him from Thumbtack. I thought he could be a lot more professional, have better customer service and do what he says he's going to do. I will not be using RJA Floors in the future.

Description of Work
Painted my condo unit, installed an electrical outlet and light

Robert A. came on a weekend to give us an estimate for the job. He was prompt, professional, and very friendly. We hired him to begin the job the following weekend. Robert started on Sunday and completed the job on Tuesday. We were very pleased with the tile, the workmanship, and the ease of contacting RJA Floors with questions and changes. We would definitely hire them again for our tiling needs.

Description of Work
Tiled the backsplash in our kitchen.

bRobert with RJA Floors was a pleasure to work with, and his work was very professional. We are very pleased with the results. He made several very good suggestions on details for the jo, which we used. He was prompt and tidy. We highly recommend him.

The service was good.

Description of Work
They installed carpet.

FOR A FREE ESTIMATE PLEASE CALL (703) 585-1932 TODAY. ABL Painting has the ability to transform your residence with the stroke of our paint brushes. We always use quality paint products in order to never put our clients through fading, peeling, and the falling of their paint job. Remodeling is not necessary for the transformation of the look of your estate, a simple paint job from ABL Painting will do. Family owned business with 12 years of experience. Customer service is our number one priority. Check out our commercial at https://youtu.be/lfEB1nZvFfg  …

How is RJA Floors overall rated?

RJA Floors is currently rated 4.6 overall out of 5.

What days are RJA Floors open?

No, RJA Floors does not offer a senior discount.

Are warranties offered by RJA Floors?

What services does RJA Floors offer?