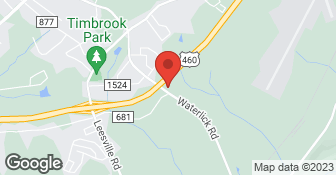 American Moving and Storage is a professional moving & storage company that is owned by military veterans and we take pride in our work! If you need storage that's no problem we can move you into our storage unit and move you back out when your ready. When it comes to moving no job is too big or too small, we own 4 26' box truck for big moves, 2 16' box trucks for smaller jobs. With American Moving and Storage you will always get an experienced crew that has the proper training and tools to move you're belongings safely and efficiently and we will always have more than enough furniture pads to wrap you're furniture in and keep safe during transport. We will make you're move as stress free as possible! We specialize in: Local & long distance moves, moving piano's, furniture pick up & delivery, in house furniture moving, & any kind of cleanout or clutter removal! We also sell packing supplies and can deliver for free. If you're moving down the street or across the country or just have a heavy object that you want moved we can help! If you need trash or clutter took to the dump or goodwill we can help! We offer very reasonable rates and are very reliable, references are available upon request, if you have any question feel free to call 434-525-3444 or visit our website at www.americanmovingnstorage.com. Discounts: We offer military and senior discounts. Storage units: We have climate control & standard units from 5x10 up to 10x30 and always have the best rates in town, Moving tips: Make sure who ever you hire is licensed and bonded, if you hire someone not licensed and bonded and they get hurt in your house under Virginia law you are responsible for their medical bills and more! We are licensed, bonded & insured....

We appreciate your business Mr. [Member Name Removed]. Thank you for choosing American Moving and Storage!
5.0

The move went so smoothly and fast!! The guys wrapped up all of our furniture, and electronics so nothing would break or get dinged. The 3stoey townhouse we moved from was very narrow, filled with wall to wall furniture and at least 300 boxes. They moved like magic and had our whole house empty in record time! When we arrived at the new house, they were already here and ready to go! It was so comforting to know that they really cared about making sure all furniture was in the correct places. We had a huge heavy desk, but they got it upstairs without breaking it, the walls or themselves! I appreciated how upfront and honest they were regarding time and cost, no hidden miscellaneous fees as with some of the other moving companies. From the initial scoping call to the confirmation phone call , then when they had arrived, and again when they were done. We've had other movers where they cursed in front of our kids, left trash on the lawns, and in the house, from either their drinks or food, broke various fixtures from furniture and never called our attention to it. I'm so elated to report that this is absolutely not the case with this magnificent team! They worked so hard and well together, cleaned up after themselves and then some, and were nice to my kids. That really means a lot to me. One of our desks had a foot that came off, not only did they let us know about it but they also fixed it! Amazing, reliable and honest. I will be using them again and you should too!

We appreciate your business and thank you for choosing American Moving and Storage. It was a pleasure working with you. Jermaine Jones
5.0

The guys worked hard and loaded everything in under 3 hours. Packed it very well.

We are happy hear that your move went smoothly and as planned! Thank you trusting American Moving and Storage with your belongings and we hope to serve you again in the future for all your moving and storage needs!
5.0

Exceptionally well! Crew of three arrived on time and went right to work. We contracted only for moving furniture, no boxes. Everything wrapped and loaded in about 1-1/2 hours (two bedrooms, dining and living rooms, and one office. Everything unwrapped and placed in about 1-1/2 hours at the other end. As one item was unwrapped, one of the crew neatly folded each blanket and stacked it. No sloppiness with these guys! Courteous, clean. I'd rehire in a heartbeat (but I don't plan any more moves in my retirement).

Description of Work
move from Bedford VA to Monroe VA

Hi [Member Name Removed] thanks for the kind words and your business! We take pride in helping our customers moves go as smoothly as possible and I'm happy to hear yours was stress free. If you ever need moving, clutter removal or self storage please keep us in mind we can help with anything moving related and truly appreciate all the work we get. Thanks!
5.0

They were very good. We had them packed and then they also unpacked, unloaded and put stuff for my mom and they were very courteous, professional, just really really nice guys. I was impressed. I compared price to other companies and they were pretty much on the same line. I would use them again if I could.

Description of Work
I used American Moving and Storage for my mom's move from Williamsburg, RoanokeVirginia to here. Her move was in July last year. I do know that they did a pack and move for her.

A long distance move of this size can be tricky business so Im happy you decided to use and get the job done right! We appreciate your business and look forward to serving in the future for all your moving and storage needs! Everyone here at American Moving and Storage thanks you!
1.0

I'm sorry your moms move didn't go as planned but that wasn't the companies fault. We went above and beyond what any other would of done and did it with a smile and no complaints. Honestly the customer's whole statement is false and I think the other all positive reviews reflect that. Also they filled this same complaint with BBB who is biased towards the customer and they immediately dismissed it as completely false.
5.0

Both teams were great! They were quick and friendly. They were also very accommodating of a schedule that changed a few times and worked around other deliveries that came in at the same time. They made our moving day so much less hectic than it could have been and I would recommend them to anyone! They were all extremely hard workers.

Description of Work
They sent a team of three movers to move up our belongings, stored everything in the truck overnight, and then delivered it at our new home the next day.

Thank you [Member Name Removed]for your business we appreciated the opportunity and are happy to hear everything went smoothly! If you every need, or know anyone who needs moving, self storage or clutter removal please keep us mind we appreciate all the work we get. Thanks again from everyone here at American Moving and Storage its customers like you that keep our doors open!
5.0

Arrived ahead of time and assessed best way to work. Quickly began moving. Took care to ensure nothing was damaged. All movers courteous and intelligent in how they worked. Terrific job!

Description of Work
Moved my mother between small apartments

Over the top quality moving and storage services is what we try to do each time and it sounds like we delivered! Im happy to hear everything went well and if you ever need any moving or self storage in the future please let us know!
5.0

Sidney, Dereck, and Dave were fantastic to work with. They arrived on time, walked through the house to see what needed to be moved (select pieces only), planned the order of removal, and then got to work. They were extremely pleasant, with great attitudes, and very careful about walls and floors while removing furniture from the house. Unfortunately, it was raining the entire time, but they covered up each piece before it left the house so nothing would get wet. I'm not positive about the cost because the person receiving the furniture on the other end was footing the bill, but I think it was $120 per hour. They helped ease a stressful situation, so I would absolutely call on this company again and would request these guys in particular.

Description of Work
Moved furniture, weight equipment, boxes, yard tools, and art work from one residence to another.

Hi [Member Name Removed] I am happy to hear we made a rainy stressful moving situation less stressful for you thats our goal! Please keep in mind that we also have self storage and clutter removal and we do long distance moving all over the country. Thanks again for your business we all appreciate it here at American Moving and Storage very much!
5.0

They were very prompt & worked quickly!

Description of Work
Moved the contents of a pastor's church office from one church to another.

Hi, [Member Name Removed] thank you for choosing American Moving and Storage as your trusted Mover! We were happy to assist you with your moving needs and hope we get the honor of continuing to serve you for all your moving and storage need!