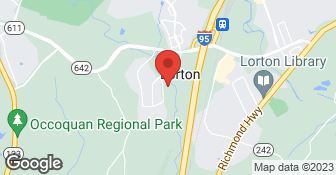 Whatever your water problem, why not give us a call and schedule a no-pressure professional inspection? We'll figure out the source of the problem, explain to you what causes it, and discuss your various options are for solving it. We'll never push for an overblown one-size-fits-all cookie-cutter contract....

We are a veteran owned business with over 16 years of experience. We specialize in lawn irrigation maintenance, as well as, outdoor low voltage lighting and drainage systems. We provide service to all irrigation systems and offer a variety of service options.  …

I had received quotes from three other waterproofing companies for moisture coming through the wall and causing paint bubbles. They were honest and did not try to oversell me, whereas others tried to sell me on a solution that I didn't need.

Description of Work
They did waterproofing for me.

Associated Desert Dry Waterproofing was recommended to me by word of mouth. I had to the pleasure to work with Rick and Antonio on two different occasions. Desert Dry gave me multiple options that contrasted price and longevity; they were very good at explaining the most economical solution for me needs. At no time did I feel pressured or subjected to up sales. I decided on a water proofing solution that was minimally invasive to the structure while retaining a warranty. The work was performed on time and within budget. Based on my experience with them I intend to use them Desert Dry for life.

Description of Work
A crack in the basement wall was sealed and flashed in order to stop a below grade water leak.

David Reiff is great to work with. I find him very honest. His crew was likewise great to work with. I had multiple estimates from different contractors with a variety of solutions to water in my basement, which was leaking down the wall by one of the window wells. Water was also collecting in this area outside during heavy rains due to the yard having settled over the years, a leaky gutter(fixed separately), and a leaky window well. David had an original solution that was minimally disruptive to the house and yard. Based on his years of experience in this line of work, he told me what he thought would work and what he thought I didn't need that others had suggested. He surmised that for my particular issues I did not need a french drain system inside the basement, and that I did not need to regrade the entire yard. His unique idea, after looking at the lay of our land, was where to put a second swale, to ensure that water moved away from the house. The other contractors who gave me estimates knew the problem, but came up with more cumbersome solutions in order to be able to guarantee their work. I am very happy with the work David's crew performed and with the results. He gave me a ten year guarantee on the work. (I have heard that swales in this area tend to need to be redone after 10 years.) The March and June rains this year were the true test, and the swales worked fabulously. I am grateful.

Description of Work
Desert Dry replaced two window wells and created a set of two swales, some in the grass, some with stones, to ensure water moved away from the back of the house.

Desert Dry did an assessment of our water issue in the basement, which appeared to be due to hydrostatic pressure from below. They suggested installing a sump pump in a corner of the house. Other contractors, suggested larger fixes that included adding extensive drain systems and would have been much more expensive. Desert Dry's position was that we should try the simpler solution first. I appreciated the effort to keep costs reasonable and only consider the more expensive fix later, if deemed necesssary. We had water in our basement again 9 months later. They came out and checked things out. The sump pump was working properly and the issue was completely unrelated (a neighbor w/ a leaking pipe). They did not charge for the visit.

My daughter's townhouse has had water infiltrating her basement in the past. We had it fixed by another contractor but the sump pump that was installed runs almost constantly. I called Desert Dry to find out what the problem was. Desert Dry arrived on time and quickly diagnosed the problem. The previous company did not install a "check valve" to prevent water from flowing backwards; that is, water pumped out of the sump was flowing back into the sump as soon as the pump turns off. My daughter was told to buy a check valve for less than $5.00 and "have Dad fix it". A plumber would charge $125.00 for the visit and work. I am pleasantly stunned by the professionalism and integrity of the company.

Description of Work
BOTTOM LINE: Desert Dry diagnosed my daughter's problem for free; told her she didn't have big problem; and, did not take advantage her.

My client is too busy to call. I am calling for her. If my client called for an appointment no charge. But since I am a realtor, the cost would be $200 for an inspection. My advice: Just charge a fee for an inspection that is reasonable, like $29 like Michael & Sons does. No need to get ridiculous because you don't want the business or don't want business from realtors.

Description of Work
I am a realtor. I tried to set up a waterproofing estimate for my client.

Due to some basement flooding we called and asked for a quote from Desert Dry for either an interior or exterior water management solution. Bob the operations manager came out and did a great job explaining the options for our house. In our case he recommended digging out the exterior, sealing the foundation and installing a drain at the base. In our case the quote was somewhat lower than most because our house is on a hill and needed less digging toward the back. Bob was on time, knowledgable and made good recommendations. This was good advice, no hard sell here. The Falls Church area had just experienced lots of storms so we had to wait several weeks before the work could begin, but this was understandable given that this company gets a lot busier after lots of rain. On the scheduled day Bob showed up again with the crew manager Rimberto and several workers. They got right down to business and worked all day. The job was scheduled for 2-3 days and they were able to stay a little late on day 2 to avoid coming back for a third day. Since the foundation of my house was exposed after the first day they left the hole secured with a temporary fence and tarp which I appreciated since I have small children who would have just loved to explore (fall in) the dangerous work site. When I arrived home from work on the second day they were finishing up and Rimberto took some time to go over all the things they had done. They also included a window well and drain that was not in the original quote for no extra charge. Cleanup after the job was complete was excellent as well. We haven't yet had enough rain to know for sure whether the solution worked but based on what I saw I am confident they did a good job. Also, they offer a 15 year guarantee and they have been in business long enough that I believe they can honor it if needed.

Description of Work
Dug out house foundation, sealed exterior wall, installed drain at foundation base and filled everything back in

JT was great. He came to the house and spent a lot of time looking at the water problems and going over different solutions. He was very conscious of not doing excessive work, keeping costs down but meeting our needs, and not creating a lot of repair work to existing flooring and the basement bathroom. He gave me three separate estimates for three different courses of action, all with reasonable prices. His crew was able to get the work done in a day and a half, they were punctual, courteous and very good with clean up and keeping me informed on how the work was going. I would definitely recommend Desert Dry for water proofing work.

Description of Work
Installed a trough drain outside of basement door, installed two sump pumps with water powered back up, ran pipes to the street to carry water away from house.

The price was reasonable and right in line with other quotes we got. The estimate Bob gave us was exactly what we paid. The service was friendly and professional. They did a great job and cleaned up well. It was probably cleaner after they left!

Description of Work
They installed a sump pump and a drainage system inside right before a big rain!

Overall, it was not a positive experience. I would, however. give high compliments to the sales associate, Bob D. He came out a few times to the home and was genuinely interested in trying to find a low cost solution to the water problem. He was also responsive to phone calls and emails. The major problem was with the installation team led by Rimberto. The job was supposed to be done in several hours but it required almost two days. He did not place the sump pump and outside drain as indicated in the signed contract. After drilling a hole in the outside concrete wall, he then had to fill it in order to vent the drain in another location. Also, during the installation and removal of drywall, his team cut an electrical cord.resulting in power failure to part of the home. Rimberto was difficult to work with and defensive when questions were asked. His team, however, did clean up the debris and there was no mess to clean up. I contacted Antonio, the supervisor, who was responsive. He brought in a third party electrician to fix the problem the next day. He also did a quality control check by filling the sump pump with water to see if it drained properly. At this point, we have not had a heavy rainfall so I can not evaluate if the sump pump installation provides the solution to the water leakage.

Description of Work
Installed sump pump and drain in basement level of home.