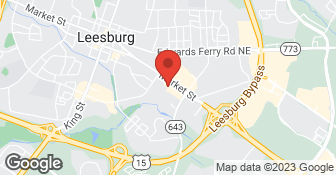 Audi Contractors was established in 1984 and is a family owned home improvement contractor. We hold a Class “A” Virginia general contractor license and are fully bonded and insured. Since 1984 Audi Contractors has grown, not only in size but in reputation, because our many clients have referred us time and time again. We now sell products such as kitchen cabinets, faucets, tile, hardwood, carpet and much more in our 3,000 sq. ft. design center in downtown Leesburg, VA. Please visit us at 12 Sycolin Rd SE, Leesburg, VA, 20175...

JuanJPainting LLC. is a company with more than 12 years of experience in home renovations. We are Insured and Licensed in each project to be carried out. We have the experience and dedication to bring your dreams to reality! Specializing in Painting Services, we guarantee your satisfaction, and we won’t leave until the job is done right. We pride ourselves on the quality work we provide, while delivering great customer service! Call or click to schedule a free estimate today!  …

All American Painting Plus is a locally-owned professional painting company serving Northern Virginia. We believe in honesty, integrity and trust in everything we do, from start to finish. We’ve developed an outstanding reputation of excellence by providing professional painting services to help residential clients enhance, protect and maintain their American Dreams for almost two decades. You can depend on us for accurate estimates and quality craftsmanship. Every project is backed by a two-year written warranty. Please note that we have a $1,200 labor minimum for all new customers.  …

We had several estimates done for a bedroom, bathroom and hobby room in our basement, and Audi had reasonable, realistic rates and were the friendliest and most professional of the companies we dealt with. That experience continued throughout the project, as Jamil and John were incredibly helpful and committed to building our rooms exactly to our liking. Can't recommend Audi Contractors enough, and we have already used them for additional projects and recommended them to neighbors, friends and family in the area (my brother-in-law saw our basement and soon hired Audi to finish their home as well)

I finished several projects with Audi Contractors around my house, and would highly recommend Them. They are responsive, on time to appointments, professional and courteous. They have a beautiful new design center in Fairfax. And their quotes were reasonable. I loved working with them so much that in addition to finishing my basement I also had them install the back splash to my kitchen, replace my laundry room wire shelves with cabinets, make extra long carpet runners for my hallways, and install an instant hot water dispenser to my kitchen sink.

We worked with Audi for our kitchen renovation. They were amazing to work with. The price and the quality of the job was fantastic. The crew was always courteous, on time and always cleaned up afterwards. I would highly recommend them.

Made an appointment for 1-1:30. They showed up at 12:45 and must have left before 1:05, when we arrived. Never called. When I called them back they said they were there till 1:15 and that they don't call clients during such circumstances.

Mr. [Member Name Removed], It was a very unfortunate situation and we apologize for the confusion. I arrived before 1:00 that is correct and knocked on the door. Since there was no answer at the door, I waited in my truck until 1:00 and knocked on the door again, yes again no answer. I waited until 1:15 to which you will disagree with and I left. I called the office at 1:12 to see if you had called to say you were running late, however that was not case so I left. It is disappointing that you would actually right a negative review since we were on time to the [Member Information Removed]. One would normally think that if they are running late, you would call to say so. You actually stated that I should have called to see where you were, which is not what we do. The office and I tried to reschedule the appointment because I was on my way to another appointment, to which you declined and we respected. I do not believe that you should be able to write a negative review for services never rendered to you. You got our name in the Best of Loudoun 2016 which should tell you what kind of company that my parents tirelessly worked at for years. I assure you that had you chosen us to complete the project, the grade on here would have been an A, no questions asked. It is a sad day when the only two negative reviews on Angie's list and Yelp are from clients that never used our services. As stated over the phone, sometimes the client/contractor relationship isn't a good fit, no harm no foul. I would just like to end this by saying, we were on time to this [Member Information Removed]. The 30 minute window is if there is unusual traffic on our end and in that case the office is required to call the client. We were on time and ready to give you an [Member Information Removed], unfortunately things did not work out. Thank you again for even considering us for the project and we wish you the best in this bathroom remodel.
5.0

.Audi contractors started work on February 13, 2012 and completed the work on March 22, 2012. The work consisted of the gutting of the kitchen including a bulkhead. Kitchen cabinets were salvaged for use in other places. The wiring and plumbing were redone for the new kitchen configuration as well as electrical changes needed in the garage, bathroom, deck area, and basement requiring a new master breaker box. Audi installed and finished drywall in the kitchen and also patches where electrical changes were made. Floor in family room and kitchen was done by Ayoub/Audi Interior Concepts and the cabinets were purchased through them also and are not included in the cost shown. Also appliances are not included in the price. Audi installed the cabinets, added crown molding to the family room, kitchen and hall. They painted the drywall and all other walls as well as the trim. The work was supposed to be done by March 20, 2012, the day I was to undergo a hip replacement, but was delayed by the cabinet manufacturer who missed a page on the order. Audi took steps to assure the delay was as short as possible, and amazed us by completing the work before I returned from the hospital.

Description of Work
The primary work was to re model the kitchen and add crown molding, flooring, and paint the family room which adjoins the kitchen. Removed bulkhead in kitchen and re routed soil and water pipes in ceiling. Expanded master electrical service box and run 6 new lines, and modify several others. Installed new toilet in master bath and in powder room. Drywall, sand, patch and paint ceiling and walls where bulkhead was removed and electrical modified. Install new kitchen cabinets, island, counter tops and tile backsplash. Install crown molding in family room and kitchen. Paint walls and trim in family room, hall and kitchen.All were done in an excellent and professional manner.

They were very good. They have done good work for me previously. They have moderate cost. They were extremely good about following up on anything that happened after their leaving the premise.

Description of Work
I used Audi Contractors for general remodeling.

Excellent. No issues or conerns.

Description of Work
Victor is very talented and honest. Beautiful work. Always our go to contactor when work needs to be done.

We liked that the owners actually work the job with the employees rather than just farming it out to subcontractors. They use subcontractors for some things, but they also do work instead of sitting in an office and collecting checks. We spoke with one of the owners and he presented himself well; he seemed to have a good personality and seemed like someone we would enjoy working with. We decided not to use them for the job because their price was considerably higher than the person that we chose. They were prompt, they were responsive, and they got back to us on time. We are considering getting a quote from them for some additional work.

Description of Work
Audi Contractors gave us a quote last year. We wanted a porch and some exterior French doors replaced.

These people usually do kitchen, bath and basement remodels but we only needed a backsplash. They were great and reasonably priced. I couldn't have asked for a better job done.

Description of Work
Installed glass tile backsplash in our kitchen

Full service interior remodeling including: Bathrooms, Kitchens, Basements, Bars, Additions. We're a one stop destination and will take care of everything from the initial measurements, through full product selections, and full construction.