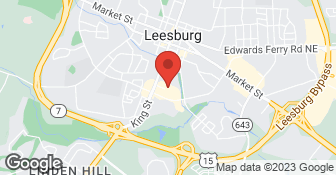 American Exteriors & Masonry is a family-owned design and remodeling firm located in Leesburg, Virginia. With 24 Angie's List Super Service Awards in 7 years and three generations of experience, American Exteriors & Masonry is Northern Virginia’s most trusted exterior remodeling contractor. Whether you are building a new home or improving an existing one, you can be confident that American Exteriors & Masonry will make your vision a reality. We hire only specialized, experienced technicians to install our extensive menu of products. We hold a Class A Contractors License, the highest license you can acquire with the state of Virginia (License number 2705170807 Class A). We are fully bonded and insured with Workers Compensation and General Liability Insurance. At no charge, we will design a custom outdoor living space especially for you. Compare our high quality construction methods and superior warranties with our competitors, and you will see why we have no competitors. Don't take a chance on quality. Call for your Free Design Consultation and Quote at 703-443-2699 or on the web at LoudounCountyContractors.com....

It was good. It took a while to get the work started, but when it started it was done quickly and efficiently.

Description of Work
They put in some stairs going down to my driveway from the patio.

This company is a complete sham. DO NOT HIRE THEM. We contracted with them over a year ago for a deck and patio. They finally completed our deck a month ago, and were suppose to start immediately the deck. They have not started it yet, and lie to us daily about the status of starting the deck. Buyer beware. They are not trust worthy.

Description of Work
Contractracted for a deck and patio

After doing such wonderful work on our front porch, we hired the firm in April 2021 to replace our deck and signed a contract with the owner, Carmen Pretopapa. The job was to suppose to start July 14 and be completed by July 28, 2021. After I put down a deposit, complete radio silence! I reached out several times, via email and phone, and left several messages, which were not returned. I finally reached Carmen himself the last week of August 2021 and he indicated they were meeting on my project that week and would get back to me by 9/1/21. Radio silence from the firm until recently when they called to say they were sorry for the delay but was ready to start the job again--when I explained what happened and asked for my deposit back, the company said they'd look into it and get back to me and that's the last I heard from them. At this point, I don't have any confidence in this firm! I am so disappointed in American Exteriors & Masonry and would simply like to have them return my $2500 deposit!

We knew that the demolition work would expose additional repairs that would need to be done. The crew worked quickly to handle the demo work, and we were able to get a solid idea of the additional work to be done. After an honest review of what was needed, we came to an agreement on a reasonable price and all of the repair and replace work for our roof overhang and carport was completed. An efficient and pleasant experience from start to finish. Great work!

Description of Work
Screened in porch demolition, and additional repairs

I would give this business a zero if I could. Project was a mess to start with due to poor communication between the owner and his hired help. They put the wrong stone down and had to replace. After a couple of years most stones popped due to improper installation. Owner claims a 10 year warranty on work and will not honor. Stay clear of this business!!

Worst experience ever - 7 months in nothing finished. Crew coming to my house to try and get paid

I for one love to receive a good recommendation when it comes to contractors. And when I have a great experience I will shout it from the rooftops. The good ones understand the value of word of mouth marketing and focus on the customers needs. We contracted with American Exteriors and Masonry for a project in May 2020 that was supposed to start August 1st. Paid 60% and after no working being done until the beginning of October, we had about 5 solid days of work then we have hung in a lull with hit or miss work being done. We are 6 months from the contract signing and still await the vinyl windows and screens (which by the way take 4-5 weeks to arrive and have not yet been ordered). We were originally told project completion by mid-August and here we sit about to carve a Thanksgiving Turkey and still do not have a completed project. The worse part of this process beyond our situation is the poor sub-contractors who built this beautiful porch have not been paid a dime, they have come by twice to collect money from us. Where did the 60% payment go?

Description of Work
Screening of existing deck and patio

Excellent job! They paid attention to details and did amazing work! They even replanted some of my plants that needed to be moved. I would definitely use them again!

Description of Work
New sidewalk with slate and brick trim.

I've previously reviewed this company with an 'A' grade. They built a deck for us at a good price. We are pleased with the result, by and large. Some of the boards came a little loose and nails popped out a bit. We were told this was normal. We were also told the deck was under warranty and somebody would come around and do any needed maintenance. After trying to schedule a service call since August I've given up and expect to do the work myself. The extent of work involved is minor. I'm not sure I would use them again.

Appointment was scheduled for 10:00, was a no show with no communication what so ever. Please note, my time is valuable and if you are not able to come out, it would be nice for you to let me know.

After discussing my project needs in writing and following up (I called them and spoke to a representative) to set a date for an estimate the firm never showed for the appointment. I called three times as well as sent a message via their website. NO FOLLOW UP! The lack of respect and professionalism was truly surprising given the ratings on Angie's List. Too bad for them. Based on the other estimates received, they have lost about $20k of work as well as the word of mouth recommendations so common in our tight knit community.

Thank you for the feedback, we were surprised to see this review as we’ve contacted you multiple times from your first inquiry. We would be happy to discuss this further with you if you choose. Please contact Ashley at 703-443-2699 Please use our other reviews as a more accurate description of our company.
5.0

One year later, during the winter a piece of stone chipped. Contacted Carmen the owner, and thenext day he had someone come take a look. The next day and within the week, it was beautifully fixed!

Wonderful experience to work with Carmen, Nina and Ashley at American Exteriors and Masonry! Smooth from the beginning negotiating price ( get what you want within yur budget) to work in progress to project completion. Quality work, great customer service and very happy with how our 2 level deck, front steps and walkway and back patios turned out, just beautiful! They are very responsive and quick to address questions, concerns or just check in with you. The staff and crews were just as professional keeping you in the loop on progress or any challenges consulting with you to make decisions. Quality work and complete customer satisfaction!!

Very well! in addition to doing a splendid job, their team is friendly and helpful. Office assistance needed, long after the job was completed, was provided in a very swift and courteous manner. I plan to contact them, again, in the near future.

Project went very well. One area was not done to my liking and they quickly removed it and reinstalled at no additional cost. New deck is beautiful. One railing board has come loose and they are living up to their guarantee and servicing that next week.

Once construction was underway the project went very smooth. Their stone masons are much more akin to being artists, masterful work. Carmen was extremely helpful in the design phase and he helped engineer the winning solution. American exteriors stand by their work and had returned several times to address Effloresce which is natural. If you are looking for the best quality, workmanship and price, go no further ... you found your team!

We got a nice deck for a good price. Work was done in a reasonable amount of time. There were a few hiccups along the way, but Carmen worked with us to resolve them. Their general approach to design and pricing compared well with competing contractors.

Description of Work
Wood deck in back of house

Thanks, [Member Name Removed]. You were great to work with and the project does look real good, Rob does nice work.
5.0

The quality of the work was excellent. The contractor was responsive and easy to work with. Highly recommended.

Description of Work
Construction of a replacement for a collapsed retaining wall.

It went as well as any outdoor construction project can go. Weather and terrain prevent all such projects from being on a precise schedule.

Description of Work
A wind storm in March blew down the junky fence and damaged the junky retaining wall installed by the homebuilder (see pic). American Exteriors teamed with JEMG Fences to replace the retaining wall and the fence. The attached photos illustrate the before and after. I am delighted with the final results.

We thank you for your business and your review. We look forward to a lifelong relationship serving your exterior home remodeling needs!
5.0

It went great. Job was finished quickly and professionally. Carmen was very helpful and when it came to making minor changes, it was not a problem at all. The guys he used to do the work were professional and worked quick. Was not disappointed in anyway.