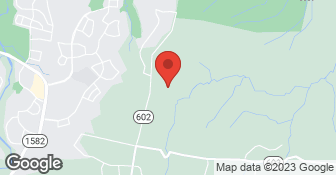 The roof and siding did not last one year before leaks started to appear. American roofing came out within this period and re-caulked the leaking areas (two of them), which fixed the problems only temporarily. The leaks reappeared about 6-9 months later and American Roofing or the main contractor who build our house refused to do anything about it (this was outside the warranty period). Upon investigation, trim around our house was improperly installed and in several areas there was not flashing underneath the trim to deter leaks. Poorly done, would not trust them.

Description of Work
American roofing did the roofing and siding of our newly constructed home (prime contractor hired them, not us)

Our roof developed some leaks in late October 2011, and we started looking around for roofers. Two of the three initial companies we contacted quoted us a price of $12,000. We then received a reference for American Roofing, which we followed up on. The owner of the company was quick to answer phone calls, even though he was on vacation when we first contacted him. When we had some questions about the contract, he readily accommodated our requested changes. Less than a day after the contract was signed, he had scheduled us for our appointment the following Monday. The workers for the company arrived on time, were conscientious of any mess that they might make, and completed the job in a timely fashion. And thank goodness! The day after they completed their work, we were treated to a true deluge. I am happy to report that the roof has held up admirably. Please note that this company specializes in a spray to coat and seal a roof. The companies that had quoted us $12,000 were proposing a different process, one involving repitching the roof, etc. using conventional materials (bitumen, etc.). The American Roofing option was a less thorough option, but a sufficient one for our needs.

Description of Work
American Roofing Co. used a spray to coat and seal our roof and duct work.

THEY WERE OKAY. THEY DID A GOOD JOB. THE WORK WAS COMPLETED IN A FAIR AMOUNT OF TIME. I WOULDN'T RECOMMEND THEM TO ANYONE SIMPLY BECAUSE I DON'T WANT TO.

Description of Work
RE-DID MY ROOF.

Simply put - we believe that improving your home should be enjoyable. That is why we spent years designing our consultations, installations, and customer care experiences to minimize stress and provide every client with a fair and honest home improvement experience. Founded in 2005, Windows on Washington has become one of the area’s most respected home improvement companies because we make our clients' homes more beautiful, comfortable, and energy efficient. We are proud Angie’s Super Service Award winners, which we’ve now earned for seven consecutive years. We have an A+ rating with the Better Business Bureau and have never had one filed complaint. In addition, we have hundreds of positive customer reviews on Angie’s List, Customer Lobby, Home Advisor, Guild Quality, Houzz, and Yelp.  …

Our handyman company is dedicated to providing top-notch repair and maintenance services for both residential and commercial properties. We have a team of skilled craftsmen who are trained to handle a wide range of tasks, including carpentry, painting, electrical and more. Our goal is to take care of all of your home and business repair needs, big and small, so you can have peace of mind and focus on what matters most to you. We pride ourselves on our prompt and reliable service, as well as our attention to detail and commitment to customer satisfaction. We offer flexible scheduling and competitive pricing, and we are fully licensed and insured for your protection. Contact us today to request a quote or to learn more about how we can help you with your repair and maintenance needs.  …

Our goal at Falcon Homes, LLC is to provide our clients with the best possible solutions for their home’s exterior needs; specializing in windows, doors, and roofing. We are an independent, veteran owned, fully licensed and insured contractor with over 25 combined years in the home remodeling industry. We take pride in our work, and representing our clients and their homes as if they were our own.  …

We offer new construction and repair services for all kinds of roofs. Including: Shingles, Metal roofs, EPDEM, TPO, Cedar Shake, Slate, and Spanish Tiles. We also specialize in Gutter and Skylight installations. If a service you need is not listed here feel free to contact us and ask!

American Roofing Co is currently rated 4.3 overall out of 5.

No, American Roofing Co does not offer eco-friendly accreditations.

American Roofing Co offers the following services: We offer new construction and repair services for all kinds of roofs. Including: Shingles, Metal roofs, EPDEM, TPO, Cedar Shake, Slate, and Spanish Tiles. We also specialize in Gutter and Skylight installations. If a service you need is not listed here feel free to contact us and ask!

Are there any services American Roofing Co does not offer?