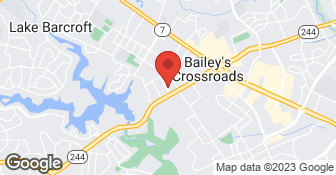 ALL REMODELING COMPANY is a Washington D.C. area full service remodeling firm with over 30 years of expertise in renovating residential and commercial properties...

We had a leak in the roof. We contacted Ike and he had a crew come the same day to do the work. They found the leak, repaired it, and reshingled. They were very prompt and professional and did a great job. The work is guaranteed for a year.

Description of Work
Repaired leak and reshingled section of roof

The project went swimmingly. The workers showed up on time and worked very energetically and steadily. They carefully covered everything that might otherwise have been in danger of dirt or debris, and they worked meticulously and deftly. At every juncture where something slightly unexpected arose, they immediately consulted with me for guidance on how to proceed. There was a big problem with the last of three double rolls of wallpaper, because the pattern did not match up with the other two rolls. At first, this seemed a huge obstacle, but and quot;Moand quot; figured a way around it by repositioning several swaths of paper he had already put in place, and the final result shows no matching problem. I still do not know exactly how he did it. The team went beyond the scope of the job in several ways that were very beneficial to the overall final result. Specifically, they painted the ceiling twice rather than the anticipated once, to make sure that some earlier damage that was there when they started was completely covered over. Now you cannot tell there was anything amiss with the ceiling. Also, they caulked the bathtub and tiled shower -- not part of the original job order -- just because it needed to be done and without it the job did not look quite fresh and smart. Finally, they took the time to cover the air vent cover with wallpaper, carefully matching the pattern, and returning the next day after the paste dried to cut out the vent holes. It should be noted that my wife and I had purchased everything but the ceiling paint in advance, so those expenses were separate from the company's charges. Also, a slight negative: one of the workmen had a fender bender the morning of the second day of the job, and therefore did not arrive until about noon. That was mildly annoying, but in the greater scheme of things, hardly worth mentioning.

Ike Jarari is the best contractor I've ever worked with. Hands down. We've done 4-5 BIG reno projects and I can tell you that from now on, I will only use Ike. The quality of his work is the best and most importantly, Ike is the most honest contractor I've ever worked with. He's accountable and reliable, and those two qualities seem to be rare with contractors. We sold our home 18 months after Ike did all the work and on inspection, there were 3-4 minor issues that arose related to our renovation projects (nothing major, things like seals needing to be applied to piping). Ike came over the very next day and fixed all of the issues at absolutely no charge. He stands behind his work and takes a great deal of pride in what he does. I'm normally reluctant to recommend service providers to friends since I don't want to deal with the consequences if things go awry. But in Ike's case, I've recommended him to everyone I know. Call him now. He's the best you will find.

Description of Work
Ike and his team did a ton of work for us. We ripped out the entire master bath and re-did it. Installed new hardwood flooring in our family room, did some reno work for other bathrooms, painted a bunch of rooms and did other more minor renovation work throughout our house.

They did a very good job. Something went wrong with just one piece and they came right out and fixed it.

Description of Work
All Remodeling Company Inc did all my flooring about a couple of years ago.

I called three companies to get an estimate on remodeling my old kitchen and bathroom. First company did not return my calls at all. Second company, their price was too high they almost wanted double of what All Remodeling Company charged. Since day one, Mr. Ike and his associate showed great professionalism and responsibility. They showed on the specified time and they had even called me 45 minutes ahead. They came prepared and ready. They showed me actual samples of the hardwood floor, the cabinets, granite/marble, and tile. I received my estimate via fax; it was right on budget. I called Mr. Ike to schedule the commencement of the project. After I sent my deposit they came two weeks later to remove the existing cabinets, appliances, and fixture. Immediately they installed the tile in the kitchen and the bathroom. I was told that the cabinets were already ordered. Seven business days later, cabinets were shipped to my house. After the cabinets were installed, they measured for the granite and the sink top which came a week later. Furthermore, after the kitchen and bathroom were remodeled, I gave Mr. Ike an additional job in my basement. They finished and painted my basement; as well as sanded and refinished my Hardwood floors. The entire remodeling was systematic. Mr. Ike is an outstanding business man that I would recommend to everybody that s trying to remodel their kitchen, bath, or any other related projects.

Description of Work
Kitchen and bath remodeling, along with Basement finishing.

All Remodeling Company has been actively involved in the Washington Metropolitan Area remodeling and building kitchens, baths, and ALL types of home and garden improvement projects - hence the name "All Remodeling Company." Both residential and commercial work are carried out, and we are licensed and insured as a Class A General Contractor.

How is ALL REMODELING & CONSTRUCTION INC overall rated?

ALL REMODELING & CONSTRUCTION INC is currently rated 5 overall out of 5.

What days are ALL REMODELING & CONSTRUCTION INC open?

ALL REMODELING & CONSTRUCTION INC is open:

What payment options does ALL REMODELING & CONSTRUCTION INC provide

No, ALL REMODELING & CONSTRUCTION INC does not offer eco-friendly accreditations.

Are warranties offered by ALL REMODELING & CONSTRUCTION INC?

No, ALL REMODELING & CONSTRUCTION INC does not offer warranties.

What services does ALL REMODELING & CONSTRUCTION INC offer?

ALL REMODELING & CONSTRUCTION INC offers the following services: All Remodeling Company has been actively involved in the Washington Metropolitan Area remodeling and building kitchens, baths, and ALL types of home and garden improvement projects - hence the name "All Remodeling Company." Both residential and commercial work are carried out, and we are licensed and insured as a Class A General Contractor.