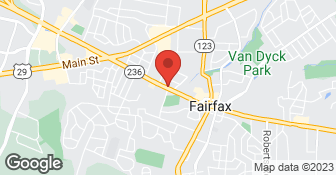 We are a small, family owned and operated company. We offer a military and senior discount....

Cosmos Heating & Cooling, a family owned business and now Best Selling author on Amazon of the following self-help book: Insider Secrets Of The HVAC Experts. They have been servicing the Northern Virginia area since it was founded in 1986 by Constantis “Gus” Christofi. The one man operation thrived through unending dedication, commitment to quality, and honest hard work. For the past 7 years, with his son George at his side, the family-owned heritage continues to afford its customers with unmatched service, excellence and skilled quality work. We Are Licensed & Insured and Service All Unit Brands. Additional contact name - George Christofi. Award winning.  …

Monday-Friday, Normal Business Hours, Sat. hours available. Since 1959, Richards Heating & Air Conditioning Co. has been designing, installing and servicing residential air conditioning and heating systems in the Washington Metropolitan area. We install “total comfort conditioning” systems to meet the unique configurations of individual homes, recommending systems that fit each customer’s needs. At Richards, we are proud of our work and are dedicated to maintaining a reputation in the industry and the community as reliable experts. Richards is a fully licensed and insured mechanical, gas fitting, and electrical contractor. We qualify in the installation and service of all aspects of heating & air conditioning systems- so there’s no need to call in subcontractors.  …

Have used F J Hooks for many years on general plumbing issues for a 1934 house in Arlington. They are very dependable and their work is excellent. Easy to communicate with via both telephone and email, and prices are reasonable. Highly recommend.

Rick the plumber did good work and seems like a reasonable guy, but his team has a serious misunderstanding of good customer service. Rick had trouble finding my address and couldn't get a hold of me because whoever took my phone number when I made my appt mixed up the numbers. My mom was at my house waiting for him while I was at work, and when she called the office to find out why he had not arrived during the agreed-upon time period, she was met with shocking rudeness. The woman she spoke with insisted that my mom was in the wrong, that Rick had gone to the right address the first time and would NOT be coming back out to perform my service. She accused my mom of calling her a liar and had her in tears by the time she hung up on her. I called back and was treated with further defensiveness, even after I confirmed that the phone number they had called to contact me was not my phone number. The woman on the phone acted very inconvenienced and offended throughout the call. She denied my mom's account of their conversation, saying my mom was "exaggerating." No apologies, no sympathy for my mom's wasted time. Keep in mind that none of the mistakes here were ours. Hooks took down my phone number incorrectly and Rick went to the wrong address. Those things alone wouldn't have been a big deal! Accidents happen. It's the way they're handled that counts. If Hooks had prioritzed helping their customers over defending themselves, I would be writing a much different review. Rick did come back out to my house and fix the leak in my toilet, and according to my mom he was very apologetic. I'm sad to say that although I was pleased with his service, I can't picture myself using Hooks again, nor would I recommend them to anyone. No level of service is worth being berated and belittled the way my mom and I were. Rick is a good plumber, but there are other good plumbers in the area, with customer service people who are actually interested in serving customers.

Dear [Member Name Removed], So sorry for this misunderstanding. Yes, the phone number was transposed, however, Rick had assured our office he was at the right address and no one was home. Our office was being told that he was there and your Mom obviously was saying he was not. When Rick returned to the job, he then indicated that he had been at the wrong address, which was one street over, however, the address on his ticket was correct. Our office unfortunately was caught in the middle. I apologize if you feel you were treated rudely and would love the opportunity to help you again. If you have any issues, please call me directly. Thank you! Peggy Hooks
5.0

They did a wonderful job. They are not cheap but they are wonderful and they do not do roto rootering of drain.

Description of Work
They fixed my outdoor faucet.

They did a great job! Prompt to keep appointment, very helpful in looking at problems, solved all very well! Responsive to needs!

F.J. Hooks did excellent work. I especially appreciate its willingness to accommodate some special requests of mine for materials (U.S. made parts) and scheduling. The crew arrived promptly, worked very efficiently, and cleaned well afterwards. I also appreciate that the crew was able to stabilized the shower head pipe without cutting into the back side of the wall (as was identified as a potential problem area).

It was outstanding in all respects. The technician, Rick, was very professional and knowledgeable, and courteous as well.

Description of Work
They came out to fix several different plumbing needs inside the house.

I recently hired F.J. Hooks to replace my 40-gallon gas water heater. They shoe-horned the new water heater into my small utility closet in such a way that its pressure safety valve was compromised and my furnace operation was adversely impacted. The installation also failed Fairfax County's required inspection, twice. They took no responsibility for any of this and showed no sense of obligation to make the situation right. Instead, they sent me two new proposals: 1) to charge me the same amount all over again to install a narrower water heater (which I researched and made them aware of) with no credit of any kind for their first installation, and/or 2) to charge me nearly the same amount again to relocate some valves and re-position the water heater. My confidence in their abilities gone, I engaged another plumber who quickly moved the valves, re-positioned the water heater, and replaced the vent piping, all for a fraction of the Hooks proposal. The new plumber's work also passed county inspection immediately. I'll never do business with F.J. Hooks again and DO NOT recommend them.

Dear Mr. [Member Name Removed], We are so sorry for all of the confusion with regard to your water heater. The first mistake was in scheduling. The person who scheduled you should have asked the appropriate questions about the space that the water heater was in. We then would have had some idea of the space constraints we were dealing. The water heaters today, are larger and often times there are space issues. We would have certainly made all of this right for you had we been given the opportunity. Regards, Peggy
5.0

Jesus was on time, courteous, professional, knowledgeable, and performed the work I requested. This is the third time that I have called FJ Hooks for help, and they will remain my preferred vendor! Everyone from the ladies in the office to the repairmen that come out to do the work are fantastic. Thanks to all at FJ Hooks!

Description of Work
My HOA requires a plumbing inspection every two years, so I needed that done and the installation of a new garbage disposal.

Thank you [Member Name Removed]! Please call us with any future needs you might have. Regards! Peggy
5.0

Great job by Jesus! He is knowledgeable and a great worker

Thank you so much for the opportunity to take care of your plumbing needs and for taking the time to review us on Angie's List. We look forward to serving you in the future. Peggy Customer Service Manager
5.0

Hooks Plumbing always does an excellent job. They are my 'go to' plumber. I am in the building industry and always recommend Hooks. Consistently professional and excellent quality service.

Description of Work
Misc repair work and installation of 2 toilets plus a bidet seat.

Thank you so much for the opportunity to take care of your plumbing needs and for taking the time to review us on Angie's List. We look forward to serving you in the future. Peggy Customer Service Manager