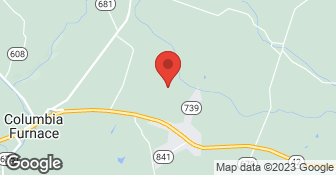 Hands on owner, who does and oversees the majority of the work, at times employing sub-contractors to work with me on jobs requiring specialized licenses, major plumbing,electrical and HVAC. Projects are always completed and if problems arise after the work is done, we will come back and try to resolve to everyone's satisfaction, not just leave you hanging. A lot of jobs obtained by word of mouth and we have many returning customers & references. We try to stay flexible & accommodating to the specialized needs of all our customers and do all we can to achieve the highest customer satisfaction possible. This is very important to us, and something we don't take lightly. A happy customer is a returning customer; and we want all our customers to be returning customers....

At 360 Painting of Central VA, we are proud to be your local choice for professional painting services. Every 360 Painting location is locally owned, operated, and committed to the needs of home and business owners. Simply put, we love to see happy customers. We know how hard it can be to find painting contractors you can rely on, and we take pride in offering a level of professionalism and customer care rarely found in the painting business. We will do all that we can to make your painting project a success. We take the time to understand your vision, then work with you to ensure each step of the project goes smoothly. No matter what kind of project you are looking to tackle, our painters have the materials, equipment, and expertise that you need to make your project a success. Call today!  …

5 employees. No subcontractors. Flat rates. No travel charges. We do exterior power washing. Complete Interior and Exterior Painting. Professional spray paint in the exterior vinyl siding with two different colors New stain and re stain decks and kitchen cabinets very detail with 18 years experience Drywall repair and any kind of texture match Also we Do wood repairs. Play with colors and match any old stain with any kind new wood also we spray stain on cedar wood in bay area houses . We also fix any scratches on hardwood floors We convert stain kitchen cabinets to paint using special primer for it and we work with two coats paint and primer when we are in the process we cover ceiling s Wall's and floors to prevent the. Over spray we don't use paint brushes to put the two last final coats . We also do stain in the concrete using hyc products acide stain. I also provide some deals for all my customers I WILBER A Gonzalez From WILBER S PAINTING want to let my customers know hwo ever buy any of my deals please contact me here's Mobil 5406848990 Or by email gonzalezchy11@gmail.com or please wait it might take me few days to get in touch with you We're also providing our service in all Mecklenburg county NC the owner of this company will be giving you an estimate in person for the Charlotte NC area we have available 5406848990 or 704 995 9538 call or text at anytime time from 5 am to 10 pm IN GOD WE TRUST GOD BLESS YOU ALL THANKS FOR YOUR BUSINESS WITH US WILBER A GONZALEZ OWNER  …

The contractor did not show up for our first scheduled meeting but made up for it by coming on a Sunday and providing a prompt estimate. I changed my previous review because the contractor apologized and would have given an A if he had shown up to the first meeting as scheduled.

Dan was trustworthy, professional and good humored. When unforeseen problems arose, as they always do in home renovations, he came up with creative solutions and ran them by us for approval. When our lock box froze up, he spent an hour trying to get it open before finally finding a window to crawl through. Most contractors would have just left, I suspect, but not Dan. Throughout this project, he and his wife worked to make sure all the details were right--and the house was tidied up when they were done. They were pleasant to deal with and always reliable. A great experience from start to finish.

Description of Work
Hired to lay tile on basement floor.contractor subcontra cted job out. This person took over 2 weeksn to lay about 300 sq ft of Tile. He missed more days than he worked and when he did show up he was so wasted he worked extremely slow. He also laid the tile wrong ignoring the directions on the tile as to gap and arrangement. Had to fire them both and hire another contractor

Recent cold weather froze water supply to an upstairs bathroom. In order to access the pipes, we had to install a new door for access to pipes. A custom size door opening was made to fit available wall space. All framing was custom made. The door was made from two layers of 5/8 inch plywood. Discovered plumbing drain that would not permit use of normal doorway construction flush with the wall. Made a 2x4 box on the surface of the existing wall in which the new door would fit. Dan did a good job. Continued cold weather with snow required extra time to complete the job. Dan also had some interruptions for personal events, but his work was very good. I expect to use Dan again for other projects.

Description of Work
Cut opening in wall to install a door with trim, hardware, and flashing. Made a custom door and painted all surfaces.

While the work that was done installing the windows was satisfactory, there were many issues and misunderstandings along the way. We kept being told that the windows were suppose to be "replacement" not "new", though Dan's construction was given direct contact information for the supplier at the time he took the job and was in communication with the supplier on a regular basis as to what the windows looked like, were made of, delivery time and how the supplier recommended that they be installed. Mistakes were made by Dan on four of the sizes and had to be reordered although Dan did eventually agree to stand behind his mistake and ordered new windows to be remade and sent. In the end, the cost of the job to us, for him to finish installing the windows was $2000 more than we had agreed upon originally, and some of the caulking/painting/hardware detail that was originally promised to be done by Dan's constuction was,"left for the "painter" to do at a later date."

Description of Work
We are restoring an old antebellum house and needed the existing original 54 windows replaced which we hired Dan's construction to do since they were local and we had read their positive ratings on Angie's list.

He did very good work. He did a beautiful work. He is fast. He tore the whole deck off in less than a day and had the wood delivered the next day and put the pierce in and I mean he was done in less than a week. The price was bit steep. We thought he was worth it. I would use them again if we need something that he did.

Description of Work
We have used Dans Construction Services in the past and last time was about 10 years ago we have had him put a deck on.

Everything went on schedule..would hire again!

Description of Work
Dan and his helper Greg fixed a leak, repaired drywall and painted my guest bathroom. I also had them fix the drywall and paint my masterbath after the guest bathroom was finished. I called Dan because I noticed a bubble in my drywall above the toliet in my guest bathroom and some paint flaking above the shower. He came out to give me an estimate, while he was there I had him open the drywal to see if there was indeed a leak since that was the only way to tell. There was a small leak. We then made arangements for him to come back and fix the leak, repair the drywall and paint. While he was doing the repairs I had him check the masterbath. I had him fix bumps in the drywall and return a week later to finish the painting. I am extremely pleased with Dan and Greg. They were professional and friendly, on time and went the extra mile. I will be calling them again when I can paint my livingroom, kitchen and diningroom. I have recomended them to my family members that need work done as well.

Dan was very professional. He returned my call within a couple of hours, set up a time to come over and look at the job and he was on time. I felt that he went above and beyond what I had asked him to do and had the whole project done within 3 days.

Description of Work
Took off shingles from two vallies on our roof. Replaced tar paper, shingles, installed ice dam. Took out damaged drywall and insulation from the roof leak, treated the mold, then replaced the insulation and drywall.