With Angi since December 2016 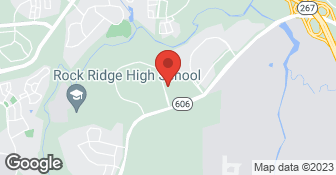 Allied provides customers with local, regional, national and international moving and related services including household & commercial storage. We treat ever move as if it were our own. Allieds difference is our people. Contact us today for your custom free estimate. We look forward to servicing your next relocation....

Great Job Moving and Storage is family owned and operated business. The company was founded in 2010 in Virginia. It's often said that moving is one of the most stressful things you will ever do. It probably is when you consider it involves your home, your family, your work and your money all at the same time. At Great Job Moving and Storage we aim to help shoulder some of the stress by taking responsibility for collecting and delivering your belongings to your new home on time and in one piece. We know that the success of our moving company depends on the satisfaction of our customers. Our goal is to make you feel you hired some of the best movers in DC metro area. We are dedicated to providing our customers with professional and hassle free moves at prices that are fair and competitive. Confident in our moving crews and the movers' abilities, our licensed and fully insured moving company includes basic liability insurance in our moving rates. You can also reach us at info@gjmoving.com  …

Campbell Moving is a Combat Veteran Family Business founded in 1978. The Campbell Moving mission is to be all that we can be because our customers deserve nothing less. We will be more than happy to serve you! Campbell Moving is a local, long distance, and international moving and storage company. Campbell Moving is one of the oldest moving companies established in the Northern Virginia area. Our ultimate goal is to develop long-lasting relationships with our wonderful client base.  …

1. Negligent handling of our shipment during loading. Alerted driver at the time & immediately followed up in writing to our Origin Agent. Specifically called out the improper handling of sensitive electronics equipment packed in original containers (i.e., we witnessed the loaders carrying & placing boxes on their sides despite clear "FRAGILE" & "THIS SIDE UP" markings). Electronics equipment (together with other items) arrived damaged. Allied refused to cover the loss of the electronics equipment simply because there was no evidence that the packing box had been damaged - despite the fact we had purchased insurance AND alerted Allied to a problem with loading this equipment BEFORE IT EVEN ARRIVED AT THE DESTINATION. Additionally, Allied covered the loss on other inventory items EVEN THOUGH THERE WAS NO DAMAGE TO THE BOX THEY WERE IN - clearly a completely arbitrary handling of our claim! After weeks of fighting with them, on appeal, their Claims Analyst told us to take the electronics equipment to an electronics store to assess the damage & have the store verify (in writing) that it was the shipper's fault. (Good luck finding a shop that will even do this! We finally found one 30 miles away). It would have cost us another $200 out-of-pocket to have the store check out the equipment, since Allied refused to pay or arrange for any such assessment (& even with the assessment, Allied would not agree up-front to pay our claim). Our only choice: (a) spend $400 on arbitration, or (b) give up & spend the $400 on new electronics equipment. 2. Heads up if you lose a package in transit! We had someone's large, oversize art box mis-delivered to our house, & called Allied to notify them immediately. It was not in good enough shape for Fed Ex to pick up; it needed to be repackaged. We had to store it for weeks before we could get Allied to come & get it - after REPEATED phone calls. At one point the Allied rep actually told us to just leave the box outside on our front porch (apparently they were hoping it would just be stolen ???? or wash away in the rains????) 3. Allied's marketing material promises all sorts of tracking of your shipment & advance notice of load & delivery dates; we never saw any of it. We never got the minimum 24 hrs confirmed notice of our load or delivery dates. In fact, the evening before delivery, Allied Customer Service was still telling us the driver was at least 2 days away! They had no idea where our truck was any time we called for a status update. We would not have used Allied for this move if we had a choice. Years ago we used them & they shipped our goods in a truck that had a faulty seal on the back doors. Our furniture packed at the rear of the truck arrived wet & black with mildew. Some of it was antique & never fully restored. I would not recommend Allied to anyone - they deliver unapologetic, negligent service & are a complete rip-off when it comes to paying legitimate, well-documented insurance claims.