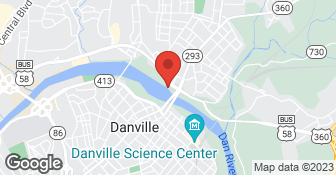 Description of Work
After MANY calls, Superior finally came to check problem with heat and said they could not fix it. Sent a bill for apex $100 but did nothing. I asked how much to replace system and they never followed up. Contacted D&M Heating and they quoted $600 to fix. D&M was very professional so I had them replace system even though they said they could repair old system.

Description of Work
I have used Superior on multiple occasions for HVA/C installs,service, and repairs. The company generally discharges it's obligations admirably. Although not always the cheapest, I could count on Superior to get the job done quickly and professionally, any job. I used the company when I did not have time to do it myself or the job required more help. That is until we decided to part ways (unofficially on my end) Here I relate the story from my point over view. Now remember, this happened after I spent many thousands through the company. Even so, I still regard the work performed by Superior better than average. The Story- | |Superior installed a natural gas twin boiler system to replace obsolete oil boiler for forced hot water system in a large building. All work was fine at completion and for the first season. My heat bill was mercifully cut in half and comfort level was more steady instead of unwanted fluctuations of past system. |At the commencement of the second heat season, however; the unit failed to operate. | |I had observed most of the original installation and wanted to reuse as much equipment as possible. The B & G pump motor for the original system was operational and I overruled the sales end that wanted to install a new (but exactly the same spec)pump at a cost of over $600.00:$600.00 savings to me. There were a few snigally leaks in some of the large pipe connections which is to be expected when combining old and new pipes. The installer and I discussed the issue and we agreed (perhaps unofficially) that a wait and see response was needed because many times expansion and contraction of materials(pipes) and minerals and/or impurities in the flowing hot water of the system generally self seal after a reasonable period of time. The other alternative was to disassemble a substantial portion of piping (2" to 6" in size) that had taken the better part of a week and considerable sweat and head scratching to put together. Sure enough, the dribbling leakages stopped by themselves in a few days of operation. One leak did reactivate off and on when the system operated during intermittently warm and cold weather, but the amount of water produced (< a quart a day) in the out of the way basement area appeared to be inconsequential. Alas, not so. | |As I said, when the second heat season rolled around the system would not operate. Being so sure that the problem was the reused older B&G pump, the sales end had the installer swap it out for a new one, which did not fix the problem. While talking with the installer(and with a little more head scratching)the discussion eventually led back to the tiny intermittent pipe leak as the only anomaly that we had to study in an otherwise flawless looking installation. Tracing the offending dribble of water, we eventually uncovered evidence where the water was getting behind some pipe insulation that protected a heat sensor which passed approval on to the computer brain of the system that; yes, there was heat present, and yes, it was OK for the brain to order the pump to do it's thing. Said sensor, being on the fritz, was the issue and I breathed a sigh of relief that the issued would be solved with labor... and a $20.00 part. Imagine my surprise when I received a bill for over 1,200 dollars the following month. I had assumed that since the pump was not the issue that I would be getting my old faithful back and the matter would be at rest for the amount of a triple service call and 20 bucks. When I inquired after my $630.00 B&G pump, I was informed that old B&G had been relegated to some lonely scrap heap and was unreachable so I would have to settle for the bill as presented. I considered this news grossly uncavalier and, after I fumed a bit, I did some research. Since I am not a babe in the woods in the HVA/C industry, I called a supplier friend for a quote on the object of this tale and found that the pump could be had for around $320.00. This revelation further deepened the crease in my brow and I took up the bill and affixed a payment for half of the stated and ran down a postman. I paid more than what I considered fair but inflated my remittance somewhat in the hopes that a proper marker may be set up for trusted, long serving, and ever faithful, B&G. |

Great The repair tech made a temporary repair to the furnace before single digit weather rolled into the area. They came back the following day to ensure the temporary repair was functioning correctly. The replacement part came in about 1 week later and the permanent repair was completed.

Description of Work
While my situation was a very easy fix, Superior Heating and Air provided perfect service when I was too overburdened to handle the situation on my own - after all, my landlord was fronting the bill.

Description of Work
I hired them to service my air conditioning units.

We had just moved to Danville in the middle of the worst heat wave in years. We had no furniture, but the garage apartment was furnished. However, the air conditioning in that apartment was not working; the thermostat had been wired backwards, and we could only get heat! We called them on Saturday, and they responded immediately. The technician was courteous and professional, and immediately found the problem (incorrect wiring). He fixed it temporarily by splicing two wires together (to get us through the weekend, and to save on overtime rates). The apartment quickly cooled down and we were able to sleep. The technician came back on Monday to fix the wiring permanently (when the rates were lower). He did an excellent job, while working around the movers who also showed up on Monday! Before leaving he inspected the air conditioning in the main house; told us it would probably last through the summer, but that we needed to have it serviced (and possibly replaced) after that. We were aware that we were going to need new air conditioning - but we were pleasantly surprised to learn that it would probably last the summer. We will definitely use them when it's time to replace and rework the main house.

Description of Work
Fix air conditioning temporarily, then come back to fix it permanently.

Very well. Service personell are well trained and very helpful on best way to get most from the unit.

Description of Work
Serviced heat pump. Have used company for 30 years and always been pleased with them

They are doing a good job. They are professional. I would use them again in the future if I needed to.

Description of Work
I am in the process of using Superior Heating & Air Cond Co. right now. Some thieves had stolen the compressor from the air conditioning unit portion of my central heating and air conditioning gas tank and they are now replacing it with a new unit. I am also having a processor replaced in it.

For more than 30 years, Bryant's Heating and Air Conditioning has been servicing, repairing and installing HVAC systems in the Danville and Pittsylvania county areas.  …

Wooldridge Heating Air Electrical is Central Virginia's Largest Residential Service provider and winner of the Angie's List Super Service Award,Voted best of by Lynchburg's Reader's Choice , & Lynchburg Business Magazine! We specialize in residential install & service of American Standard & RUUD HVAC equipment as well as Generac Standby Generators with a full service and maintenance department to maintain and keep your systems up and running ! We have been serving our area since September 1973! We would love to take care of you and keep your home comfortable, please feel free to contact us!  …

We offer sales and service of HVAC equipment, light commercial, and residential. Our Company has been in business since 1952.

No, Superior Heating & A/C Co Inc does not offer a senior discount.

Superior Heating & A/C Co Inc offers the following services: We offer sales and service of HVAC equipment, light commercial, and residential. Our Company has been in business since 1952.