Help Around the House Handyman Service 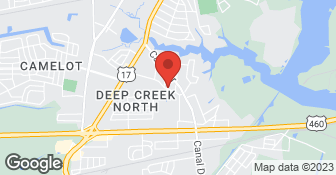 We are a small jobs handyman service. We specialize in doing those things you don't know who to call for--the "honey-do" list!

they never called back

Description of Work
Nothing was done

Jonathan and his helper did an excellent job of completing all tasks, plus a few extras thrown in after the initial estimate was written, within the time frame(s) and price(s) estimated. I obtained several estimates, and his was the most reasonable (though neither the lowest nor the highest). I also was comfortable giving Jonathan the key to my house and leaving him in the house while I was at work; this was convenient and worked out well. He always cleaned up to the point that you wouldn't know he was there except for the fact that items on the list were getting done. I had a very long list of a variety of items big and small; from installing flood lights, a ring doorbell, an exterior back door, two storm doors and two windows to fixing a broken fence, broken kitchen cabinet doors, detached gutters, and doors that wouldn't close properly, plus patching a hole in a ceiling, cleaning out ivy and other overgrown grasses behind a shed, etc., in the yard, and more. I definitely will hire him again in the future.

They arrived when they said they would, were very professional and did an excellent job. We couldn’t be more pleased. We intend to use them for another job soon. I highly recommend these skilled professionals to everyone who needs handyman work performed..

Description of Work
They replaced the steps and some rails on our deck.

John arrived to do the estimate and Jermaine to do the work at the agreed upon times. Removal of the wind vane was easy - just removal of a couple screws. When Jermaine looked at the wind turbine he realized one of the welds was broken and it could not be fixed - he explained the issue and we agreed he should remove it and replace. He made sure my husband saw the broken weld when he brought the unit down (any man who is used to taking care of such things himself would appreciate that). He went and got a new unit and it was replaced within 3 hours. Cleaning the vent was an adventure - our dryer is in a very small area making the work difficult but Jermaine climbed into the small space and really did a great job of cleaning the vent (two grocery bags full of lint!). He then replaced the outside cover on the vent. The cost was exactly as estimated and Erika called to tell us the price of the turbine while Jermaine was still at the store so no surprise there. Overall they did a great job, we are very pleased!

Description of Work
we needed a weather vane removed from the roof, one of the wind turbines on the roof repaired and dryer vent cleaned. This is a two story house and most of the work was on the roof. We are retired and my husband no longer goes on the roof!

Both appointments - one for estimate and one for work- were kept exactly on time. Jermaine did a great job - he told us that the turbine had a broken weld and it needed to be replaced (not a surprise on a 40 year old house) and after he brought it down from the roof made sure my husband saw the break, then went and got a T

Description of Work
We need our dryer vent cleaned, an old weather vane removed from the roof and a turbine repaired on the roof. House is two story and it meant most of the work done up on the roof.

He arrived on time, and was very nice and professional. He wrapped the vinyl straps around the chairs and pushed in the rivets to hold the straps in place. There were 4 chairs and a glider. The time it took to do the job and the price were what I expected. I was happy to find someone willing to do a relatively small job. I was happy with the work and would call him again.

Referred by Bob?s Job as they don?t handle Portsmouth, estimate scheduling was fast, Luke Croll came out estimated the front door paint job and rotted wood replacement for my rental unit. He emailed me an estimate fast and the price was reasonable. I set up a fast appointment with Nancy and work was done. I have not seen the work myself, but my tenant and my dad stated the work looks very good. Will definitely call again for more work.

Everything was done in a very professional manner and work is quality work. Mr. Croll is extremely nice man and is always on time and also willing to make any changes you like. Will take the time to discuss the project in order to understand what your needs are and what you want the end product to look like. this is my 2nd time using Help Around the House and I will continue to use them for all of my handyman, updating projects. Mr. Croll will also be honest and up front about what he is able to do and what he cannot. He does have other vendors/contractors he can refer you to if he his not able to do a particular job.

Description of Work
Repairs to 4 sections of fencing in back. Repairs to shelving in shed. Take down and rebuild wooden column on knee wall in entry way. Install anchors/posts for flag pole.

We specialize in the tiny tasks that keep your household running.

How is Help Around the House Handyman Service overall rated?

Help Around the House Handyman Service is currently rated 4.9 overall out of 5.

What days are Help Around the House Handyman Service open?

Help Around the House Handyman Service is open:

What payment options does Help Around the House Handyman Service provide

Does Help Around the House Handyman Service offer free estimates?

Does Help Around the House Handyman Service offer eco-friendly accreditations?

Does Help Around the House Handyman Service offer a senior discount?

No, Help Around the House Handyman Service does not offer a senior discount.

Are warranties offered by Help Around the House Handyman Service?

What services does Help Around the House Handyman Service offer?

Help Around the House Handyman Service offers the following services: We specialize in the tiny tasks that keep your household running.