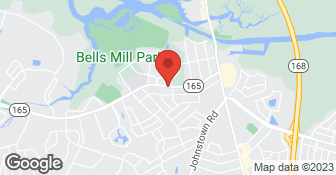 Elohim Construction is a division of David N Christ LLC. Our principals have over 25 years of experience in interior design, construction, property rehabilitation and real estate. Our eye for detail and desire to achieve excellence on every job creates the "WOW" factor in every project we are contracted to do. Contact us at info@elohimconstruction.com or at (757)724-829

This ordeal has been going on since oct. 2011. No actual work began until dec. 2011. Then it was one delay after another, excuses, and promises that never happened. We would have to repeatly call Mr. Williams for him to get to the next step of the project. Most times, it would be 1 to 2 weeks, before he would send anyone here to do any work. Many times he would not even answer his phone. We struggled trying to be patient, so that the addition would be finished, but to no avail. Now he has not answered email, or phone calls. There has been no communication from him since 4/26/2012.

Description of Work
An 9ft x 32ft addition. Which consisted of enlarging two bedrooms, and adding an additional bathroom. The addition has been enclosed partially, the plumbing has been completed, the electric needs some changes (per inspector), the bathroom area only has a tub, there are no inside walls,or floor,and the addition has no windows. The debri is still piled up in our front and backyard. Though we repeatly asked Mr. Williams, no dumpster was ever sent.

Applications for permits on this job were made in early November and due to circumstances beyond our control at the city not granted until early December (The client was fully aware of these issues) when demo and construction was started. Due to failing health on my part there were some unfortunate delays in the process thereafter. I have met with and spoken to the client since the complaint was filed an explained to them that I had been hospitalized since the 25th of April.making it impossible for me to properly supervise the project or contact them during that period. We have since then however resolved our issues, I've dropped a 20 yard dumpster to the site, cleared the job site and are proceeding with the addition as originally planned. Plumbing, mechanical and electrical rough-ins have now been fully approved by the city and we are moving towards insulation and drywall. The job is now back on schedule and will be completed in a timely manner. I have apologized to the clients and assured them that my health issues that created our problems in the first place would no longer be an issue on this project.

Here at R&R custom painting we specialize in exterior and interior painting. We take pride in the work we perform, while delivering great customer service! We have over 10 year of experience and are owner operated. Call -or- click to schedule a free estimate today!  …

How is Elohim Construction overall rated?

Elohim Construction is currently rated 2 overall out of 5.

No, Elohim Construction does not offer eco-friendly accreditations.

No, Elohim Construction does not offer a senior discount.

Are warranties offered by Elohim Construction?

What services does Elohim Construction offer?