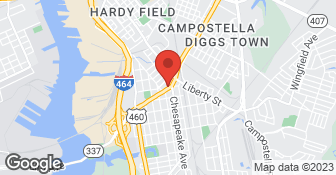 They did a really good job, but the cost was high. They were good, just very expensive. They were very professional.

Description of Work
They repaired water damage around a chandelier. They also strengthened a landing and did some touch up work.

They have done a good job although they're a little pricey. I will use them again in the future.

Description of Work
I used Case Handyman Service to put in some sand, change out some light fixtures, put in a new screen door and repair some boards on a porch.

Case was the third company I hired to repair a window which was leaking at the inside corner, rotting away the sill. The first two companies had charged me an arm and a leg and had done next to nothing (I will submit separate reports for these two). Unfortunately, this company turned out to be no better, and quite a bit more expensive to boot. The going rate was $225 for a two hour minimum visit. If your service call takes half an hour, you're still forking over the 225 bucks. They send a middleman out to your house first to pressure you into making the appointment and signing a contract, and you know he's gotta get paid too. The company sent over two guys to perform the work. Basically one of them works while the other gets paid to stand there the whole time. They were very nice guys and all--very personable--but not very useful. The first time they came out, they took off all the siding around the window and looked for a leak coming from the roof or perhaps the attic. This would normally be a reasonable approach, but considering the leak was isolated to the bottom corner of the window (with absolutely no water damage to the drywall or wood above the window sill), I think it should have been obvious that the problem was with the window itself. Anyhow, they isolated the problem (or so they thought) to the J-channel being improperly cut, which I again thought was bunk because the house is 15 years old and the window has only been leaking for a few years (a very slow leak). But I let them re-cut the J-channel. A few days later, when the rains came and the window was still leaking, I called them back. I almost never let contractors work on my house when I'm not there, but I made an exception this time and, to their credit, they did actually come out. However, all they did was take the siding off again and get on the roof (I'm not sure why, as they should have already eliminated this as the problem, but I wasn't there to direct them). So at the end of the day, they basically call to tell me they're not sure what the problem is and have basically eliminated all sources and I'm stuck with a leaky window. I guess I let the company get away with this because I had already been screwed over twice before and, quite frankly, was tired of dealing with this. But I always suspected the problem was with the window itself, and I believe the seal between the window and frame is failing due to simple aging. What the company should have been competent enough to know is that they should have taken the window out from the very beginning and inspected the seals between the window and the frame, repairing the seal if possible and recommending replacement if not. I basically paid 225 bucks for these guys to do nothing at all. Bottom line--they don't know what they're doing and they charge you a hefty price for not knowing it. Steer clear at all cost!!

Description of Work
Attempted to repair a leaky bedroom window.

The price was several thousand dollars. They were very expensive. I thought for the money I was spending that I would receive excellent quality and professionalism. The quality of work on the front porch was good. However, they did not do good work on the doors. They were also terrible about showing up on time and keeping me informed. One of the men even let my dog out, even after telling them specifically not to do this. I was expecting way more than I received, so I will not use them again for this reason.

Description of Work
They replaced some rotted wood and re-did the trim. They replaced some weather stripping as well. They installed some vinyl porch railing for me on the front porch. They also painted three doors for me. This was about three years ago.

The molding and gutter were fine. The marble floor was OK for the most part, but there were a few tiles that were not as level as I thought they should be. I chose not to have this re-done as I was concerned that the end result could be worse. Also, when they installed the toilet, they failed to install the bolt covers. While it was a minor oversight, it did spoil the appearance of the powder room. When I called the rep to discuss it, he indicated that the covers must not have been included with the toilet. I doubt that, as it was a top brand, and the box was sealed. In addition, I told him that one of the workman had left a level behind. He indicated that he would look into getting the bolt covers installed, and pick up the level. I never heard from him again. I got replacement bolt covers directly from toilet company (their customer service is great), and installed them myself. While the work was generally OK, I will not use their services again.

Description of Work
Replaced molding on back porch, installed outside gutter, installed marble floor and toilet in powder room.

Description of Work
We did NOT have the work done as the estimate was way too high. the 11,500 was the estimate we were given on a deck. We were also given very high estimates for pluming repair (bath tub faucet leak) and for kitchen cabinet repair. They were friendly and professional, but too expensive for us.

I was very upset with the service I got from Case Handyman. When I called they quoted me one price and I thought that was a little high but I understood because I do have a 4 story home. But when they came out instead of sending one guy for the quoted price they sent two men and the rate doubled but they failed to tell me that until they were finished with the job. I have tried to call numerous times to have the issue resolved and I get the run around. I have left messages and have never received a call back.

Description of Work
They pressure washed my four story house.

They did a very good job. I wouldn't hesitate to use them again. They were very neat and clean. They did a professional looking job. They didn't slop paint around and they were very reliable. We had no problems at all. They are capable of doing anything. We've used them for a lot of other jobs as well.

Description of Work
They painted my living room and dining room area.

They were just a group of reliable people that I have counted on over the years. They were tidy, respectful and they did a great job as always. I have actually recommended them to my friends as well.

Description of Work
They repaired four window seals and a corroded spot in the door of the garage. They extracted the windows and replaced them with new seals and they cut the circle of corrosion out of the door and replaced it with new wood.

There were no problems and the company is pretty decent. I am thinking of doing some remodeling in the near future and I would use this company for that as well. I enjoyed the quality of the work that they answered all of my questions honestly.

Description of Work
We hired this company to do little odds and ends the last time that they came to our home. They repaired the over hang on the roof and worked on some plumbing in the bathroom. They specifically fixed the leak in the bathroom sink.

Coastal Guys Painting we paint Exterior Interior Decks Pressure Washing Drywall repairs. Have 20 years of experience. Awesome crew. We look forward to doing business with you! Contact us today with any questions or to get an estimate.  …

Thank you for choosing Dominguez Painting, serving the 757 since 1991. WE PAINT YEAR ROUND!! Allow us to make your dream project a reality! Contact us us today for a free estimate.  …

CASE HANDYMAN SERVICE is currently rated 3.4 overall out of 5.

No, CASE HANDYMAN SERVICE does not offer eco-friendly accreditations.

No, CASE HANDYMAN SERVICE does not offer a senior discount.