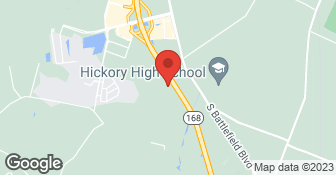 Get Ur Done Lawn Care LLC

Our mission is to provide comprensive service, in the most timely & cost efficient manner, while maintaining exceptional quality & unparalleled craftsmanship. At Outdoor Restorations we bring your outdoor visions to life. With years of experience in landscape architecture & hardsacape designs we can handle all aspects of your outdoor living project. In 2005 OR was established to provide top quality concrete work. Over the years, we have expanded our core services to respond fully to the ideals of customer service & personal attention, providing a wide spectrum of services relating to the design & construction of any outdoor living space. We specialize in patios, walkways, driveways, retaining walls, outdoor kitchens, sitting walls, fire features & pool patios. We build innovative, beautiful enduring landscapes that respond to the individual requirements of our clients, lasting for years to come.  …

It hasn't. I have not gotten any warm fuzzies from these folks but I'm going by their physical facilty shortly and will not post this review if there is any difference.

Description of Work
They have the contract in Riverwalk. It's so hard to find good lawn service. They do a good job here so thought I would find out if they would take over my townhome lawn. Unfortunately, they are not taking on clients my size but the office staff person was very courteous and deserves an A for professionalism.

Generally all went well. Occasionally I had to point out areas of concern but they always took care of anything I mentioned.

Description of Work
All landscaping services.

Felt like my service request was too little for there workload. Never felt like a valued customer.

Description of Work
Sprinkler service repair. When I requested additional service, and after waiting six weeks for a response, I abandon there service for a better provider.

Called to get someone to our house for an estimate on establishing a new lawn and finally after 2+ weeks got an appointment for them to come out. In that time I was able to get several estimates from other lawn care providers and decided to go with Agronomic Lawn Management instead. I know Basnight does excellent work but they just don't seem to care much about new business. I called ALM on a Friday and they were here on Monday. That's how you get new business.

So Basnight did come out, and turned the well back on, and because my irrigation co had come and gone, i asked them to also turn the irrigation controls on. Then there appeared to be a leak near the front sidewalk, and I asked them to look at it, since it WAS Not leaking before they had put in the new zone. The guy told me my heads in the very front of my yard were faulty and needed to be replaced, pretty expensive, he said, I said, no, they have never leaked, or caused problems. I called my old company and asked them to schedule a trip, they came, I had to pay them again, the heads were not broken, they needed to be adjusted. They said winterizing twice the previous fall caused the issue. I had to winterize twice, because the HOA's company, Basnight. was behind, and didn't get to my house until after chances of cold temps. Then Basnight kept billing me alot for the minuscule amount of work they had done, which shocked me, because they were the ones that had caused the situation. I called them twice before they stopped billlng me. they should have billed the HOA, if anyone!! By the way, there was a one year guarantee from Basnight for any work that stemmed from the addition of zones to my system, and since we had NO CHOICE from the HOA over adding the zone, I held Basnight responsible to help restart the system, they are the last ones that shut it down. I have found a new company, since my old company is no longer making the trip from Richmond to VB.

Description of Work
They originally installed a new zone in the common area in front of my house paid for by the HOA. The next spring my regular irrigation co came out to start up the system, and couldn't because Basnight had disconnected the well, and they didn't want to fool with it. So I called Basnight to come and turn the well back on. While there, I asked them to start the irrigation system as well. I already had paid my previous co to come out, wasn't their fault Basnight had turned off the well. I was unaware the well had been turned off. AGAIN, I didn't hire this company, The HOA did.

They were thorough and did exactly what I wanted. They got the exact plan that we requested and I had no problems with them.

Description of Work
We had landscaping and pavers put in. They planted shrubbery and did a paver walkway.

Basnight did an excellent job. We had several problems and improvements to accommodate in one project, including a need to replace back steps and a back door stoop or landing, new walkways to our house and pool, and a bad drainage problem behind our house. Chris Basnight designed a patio and walkways built out of permeable pavers with a large drainage field underneath, that appears to have solved the drainage issue while giving us beautiful walkways and a nice entrance to the back of the house. Basnight's paver crew was headed by Brandol. They worked very hard through very cold weather in February. Brandol is a craftsman. He was very meticulous about getting the project done right and hand-cut and fit the pavers so that they all fit together tightly. Brandol also came up with several very good suggestions on how to make the project better. Basnight also replaced large sections of wooden yard fence that was badly deteriorated. The new fence came out very nice as well. We had a couple of minor issues that I thought needed correction, and they came out and fixed them, and did a couple of other "tune up" items on the fence that I hadn't even asked for. I would recommend Basnight without hesitation.

I have contacted Basnight Land and Lawn Inc. three different times over the past two years. Each time I was promised that someone would get back with me in a week. Not being responsive up front is bad enough but when you never get a return call ...that is just absolutely horrible customer service. Each time I was told a REP would call me within a week to set up an appointment. I don't know who you have to be or what you need done to get a response. I found more customer oriented vendors who are great at what they do and treat customers with respect.

Description of Work
Absolutely nothing because they never followed up with me like they told me they would.

Our records show you contacted our company in October of 2007, but nothing since that date. When a call comes into our front desk, the homeowner's information is entered into our system and a file is created. That way we can follow up on the file once all pertinent information is collected. Not sure if you are contacting us during normal business hours, or you may have gotten to our answering service. Either way we show no record of your contact attempts. I do sincerely apologize for your experience and hope you will call us for any future work at 757-436-9617.
5.0

Christian Basnight contacted me, visited my home, inspected the landscaping, and made suggestions to correct problems noticed. Because of critical family stress, he apologized for his previous lack of response to my requests. I accepted his apologies and can certainly understand his situation. Using his suggestions, we decided to replace the diseased knock-out roses with and quot;red ladyand quot; hydrangeas, and add and quot;stella doraand quot; day lilies as borders in specific locations. Following his visit and inspection, Chris worked up a contract detailing the detailed items and process. The job was completed on April 16, 2014. From Chris' initial contact to completed project, the process took about 1 month. Thank you Christian Basnight for the beautifully installed addition to our landscaping.

First of all, I do want to say that the hardscape job was wonderful and everything I expected!!! Also, my salesman was very responsive to my phone calls. BUT.... The landscaping job was horrible!! 4 of my palm trees died when they moved them over 6 foot. Several bushes died as they replanted them along back side of fence (which they weren't even supposed to do) The weeding was non existent. They just sprayed weed killer and mulched over....never removing the dead brown grass or weeds they killed. I complained about the weeds and grass that sprouted up almost just a week after they mulched newer areas in my yard and they came and sprayed again-and again leaving the dead brown grass and weeds there. They placed mulch in the front of my yard at two different times, so with the rain and/or sunshine on the first half made the second half look like a completely different color. I complained several times with no real satisfaction or improvement. I saw Mr. Basnight out in the community during the late fall/winter and we discussed my concerns. I am to call this spring for them to come out and transplant other palms in my yard to replace the dead ones. That is the only thing I will ask from them, as I am not impressed with their landscaping skills at all. Wish me luck!

Description of Work
Hardcape: Basnight put in new pavers (pool deck) around my pool, built a stone firepit, built new round paver staricase to back door, and extended the pavers out from the existing concrete. Landscape: mulching, weeding, bush trimming, removal and replanting of palm trees to extend patio deck, and landscape rocks.