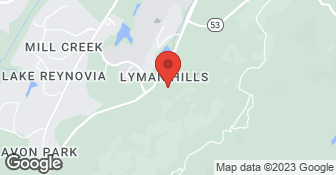 We offer a great deal on mulching pre-spring we offer discounts if you refer us to a friend or neighbor. Call Us Today!...

We're a small company dedicated to providing premier workmanship, quality materials, and outstanding customer service. After receiving my degree in Landscape Architecture from Cornell University I am qualified not only to design your landscaping but our crew can also install your project.  …

Dos Amigos Landscaping & Grounds Management has been in business for 10+ years. We licensed contractor in the State of Virginia. Dos Amigos provides full landscape services to homeowners and commercial customers. Many of our residential customers enjoy annual contracts where Dos Amigos takes care of their lawn/landscape needs for one easy monthly payment.  …

I am a one person operation. Having been in the Green Industry for 39 years, I have come to the conclusion that the best way to take care of a client's needs is strictly hands on work. I will occasionally bring in day help. Payment is upon completion unless it is a large project then partial payment at start. I also install vegetable gardens using our own compost mix .  …

Basically nightmare scenario. I had a price in writing before they began. They started weeks after they were supposed to begin then asked for more money for materials during the project (which I reluctantly agreed to pay even though was fixed price). The project was not completed on time (for a wedding event) and then they came to me with bill for a change order for about 45% over another $4000. (nothing had changed). Job was sloppy; they splashed mortar on the side of the house, there were cracks were in many mortar joints, overall it was a mess. The brick mason I had come in to clean it up said I should really remove all mortar and start over. He said it was the worst job he had ever seen!!! Best of all they filed a civil suit to try to get more money. I had to waste time going to court. I had owed them $700, which I was willing to pay just to be done with it. The judge basically threw them out, said I should pay $360. Unfortunately since I didn't have a affidavit or witness he did not take into account cost for me to have it redone. Brick mason said it would be $3800 to fix it. I usually don't like to be negative but I wish someone would have warned me about these guys. (I wish there was a way to paste photos)

Description of Work
Hired them to put bluestone over existing brick patio and extend an area for a fire pit.