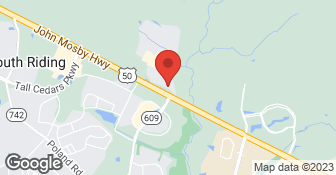 We make your carpet & rugs look like new again by offering the most thorough green-cleaning possible by our friendly and accommodating staff- saving you thousands of dollars in replacement and giving your home a breath of fresh air…removing harmful pollutants and contaminants....

[Member Name Removed], Thank you for the positive feedback! We are happy to help in anyway we can! We hope the move went well and look forward to working with you again in the future! Thank you, Lauren
5.0

Wonderful. They were quick, responsive, and professional.

Description of Work
Carpet for living room and bedrooms

Company never contacted me regarding work. Why do they have online contact requests if they never contact you? So the answer to the above question about hiring them again is “I don’t know”

Mr. [Member Name Removed], Thank you for your feedback. We do sincerely apologize for the miscommunication. I know an email was sent to you, but I am not sure what happened to it. I just sent you another email directly. We hope we can resolve your concerns . Thank you again, Lauren 703-255-6000
5.0

He and his son were fantastic. It was a pleasure to have them in our home. I highly recommend.

Ayoub Carpet Service is absolutely terrific. Their coordination staff is friendly and professional, the operation is polished and efficient, and Steuart Frye, the repair specialist they sent, is an absolute wizard. In less than an hour, he made a permanent wood stain in my wall-to-wall carpet vanish into thin air. I had no spare scraps to provide, so he used a section of the carpet in the closet and replaced it with scraps he brought that had been matched against pictures I provided ahead of time. He was careful to under promise and over deliver, but boy did he deliver. I was told the donor spot in the closet would not be a perfect match but the end result might as well have been. When I was first quoted the price for repair it sounded a tad expensive, but now that I see the results, I can say that every penny was money well spent. Steuart made my problem vanish into thin air. I would absolutely call Ayoub again in a heartbeat if I ever need their services again.

We are extremely pleased with Ayoub carpet service. They cleaned two oriental rugs for us. Picking the rugs and dropping them is a great plus. Ayoub will be our go to for any future service. Royalty service, THANK YOU!

The company was quick to respond to my request. They even sent a pic of the technician who was going to pick up my rugs. I got my rugs back in about a week, which I thought was great. Best of all my rugs truly look brand new! The one rug was so horribly stained I was going to throw it out. I’m glad I called Ayoub! Very professional and they did a fantastic job!

Description of Work
I had 2 area rugs cleaned.

Fantastic!They were able to get out all the stains. This rug was in my dining room and has had 17 years of traffic, dogs and multiple spills. It loot brand new now

Description of Work
Had an oriental rug picked up and cleaned

I have waited 48 hours to write this review because I wanted to finish absorbing this terrible experience I had on June 29, 2020 and think about how to accurately express my regret in dealing with Ayoub Carpet Services. To be clear again, Ayoub Carpet Services are horrible and dishonest. I WOULD NEVER RECOMMEND THIS COMPANY TO ANYONE not even to my worst enemy. Ayoub Carpet Services is unethical and dishonest. I give this review because first, Ayoub Carpet Services did not honor the quote that was given by Ray over the phone after a concise description of the property was given to Ray. Willy’s words were “yeah that was just a quote it meant nothing”. I have never dealt with a company in any type of business that did not honor their quote, even stores match prices and honor their quotes. Willy instead doubled the price from the quote and then told us we had too many steps on our stairs. So, we had to eliminate rooms in order for us to come to a reasonable price because we were on a schedule, that was insulting and so very unethical. Second, Ayoub Carpet Services does not give a time when they will arrive, instead they give wide window of time to allot the inconvenience of waiting for them. Ayoub Carpet Services does not even give the customer the courtesy of calling to update their arrival. Third, and most importantly, we are a 20 plus year military family, we have moved many times and we have had the carpet cleaned in a plethora of houses, and have never experienced this type of degrading and dishonest treatment as was done to us by Ayoub Carpet Services. We have had 1-year old dried blood taken out of carpet by a carpet cleaning company, but Ayoub Carpet Services could not even remove the dirt from dust bunnies on carpet. Instead Willy from Ayoub Carpet Services tells us that we must have had a dark comforter and there was nothing he could do. We could have bought a carpet cleaning machine from Wal Mart and done the exact same mediocre job Willy did. I though Angie’s List was supposed to circumvent price gouging, unethical businesses such as Ayoub Carpet Services, I guess not. I will never use Angie’s List again either.

I told the person on the telephone that I made the appointment with as well as the person who picked up the rugs that I had an over 100 year old oriental carpet that needed to be cleaned. My mother had used another company several years earlier but I wasnt sure who it was. They had sewn a cotton strip to the edge where the fringe was to keep the carpet in good shape as well as dyed some areas that had worn. When it was brought back from Ayoub the cotton strip had been ripped off in a large area. There were white areas on the rug. They were too rough with it and I dont think paid any attention to the fact that it was so old. I'm sure theyve got a lot of rugs coming in that it's just like a factory there and information isnt passed along. I doubt I'll use them again.

Description of Work
Cleaning of Persian and oriental carpets

Dear Member, We are a little perplexed that you did not reach out to us sooner so that we could address your concerns. We stand by all of our work and would have then and still will address your concerns and try to rectify them, even though it has been over 4 yrs. We clean many antique and museum pieces and though we are a big company we are by no means a factory, we possess many methods of hand cleaning rugs and these methods are determined during our pre-inspection process. It is quite possible that the rug, being over 100 yrs old, was most likely frail in the area where the cotton was sewn to reinforce it and even using the most careful techniques sometimes it cannot prevent some degradation. I will be happy to reach out to you and discuss a plan to address your concerns. Sincerely, Brian Supanich General Manager Ayoub Carpet Service

Ayoub Carpet Service is currently rated 4.9 overall out of 5.

Are there any services Ayoub Carpet Service does not offer?