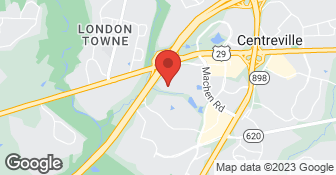 We specialize in interior & exterior painting services! We have the experience and dedication to bring your dreams to reality! We guarantee your satisfaction, and we won’t leave until the job is done right. Call or click to schedule a free estimate today!  …

Check out the article written about organic growth in the Loudoun Tribune on April 2018. It's about our company. We're fully licensed and insured.Our brand new hot water machine is state of the art and ready for any job.This, combined with my extensive knowledge in Eco friendly and caustic cleaning solutions, will remove all organic and non organic matter from most, if not all, exterior surfaces. Specifically, but not limited to, low pressure house washing, high pressure cleaning of decks/fences, driveways, walkways, asphalt and brick. The use of hot water up to 200 degrees and our knowledge of what cleaning agent to use at what time, ensures customer satisfaction and the best possible result combined with the least possible risk to your home and property. We are also available for commercial properties, fleet vehicles and construction equipment cleaning. Thank you for considering us.  …

Baileys repaired the roof and siding of my client's Lorton townhouse that was damaged by hurricane Sandy. Ken called to say that he was doing other repairs in the neighborhood and noticed that we had damage, as well. I checked his Angie's List reviews and recommended that my client ask him for an estimate. His price was better than others. He performed the work quickly as we were under a deadline. The house had been sold and was scheduled to close shortly so this was very important. I am very pleased with the work Bailey's did and I look forward to the opportunity to refer them to my clients in the future.

They had to pull my stackable washer/dryer out to finish the floor, but did not hook it back up. When I called, they came over to hook it up but did it backwards. I called again and he said, "Well, I'm not a plumber." I told him he'll have to get someone out to fix it, but he never returned my calls. I ended up having to call and pay a plumber on my own. They also got mortar on the bottom of my new cabinets, appliances and I had to throw out my toaster from the dust. They also scuffed black marks on the walls in the bathroom from removing the toilet and in the entrance hallway as well. The marks will not come off so I'll have to re-paint. They also cleaned their tools in my bathroom (until I saw them and they went outside to clean them) and the sink won't drain properly since. When I call him, he says he has other jobs to take care of so I'll never call him again or recommend him. I don't remember the exact cost, but it seemed reasonable.

Description of Work
Painted 2 rooms and installed laminate and ceramic tile flooring. They painted two rooms which turned out fine. I also wanted laminate floors laid where I still had carpet and ceramic tile in the kitchen where there was linoleum.