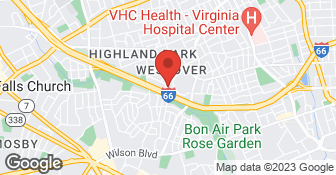 Licensed and insured yard service company catering to residential and commercial properties. The business owner has a stellar record of customer service and is a life-long resident of Arlington County. Please send an email for quickest response: seansyardservice@gmail.com....

VM Drainage & Erosion Solutions will solve your drainage or landscape problems. Now is the best time to take the first step, contact VM Drainage & Erosion Solutions about our practical and permanent drainage and erosion solutions. We are also experts in house cleaning, lawn/yard care, and tree service. We offer good prices for everyone and we are very flexible with what we do. We are proud to offer one of the best warranties in the Virginia, Maryland and Washington Area because our goal as a company is to perform the best quality work, we enjoy providing our customers with a trustworthy and transparent warranty that sets a high standard among other competitors and confidently represents the faith put in our work.  …

He is a young fellow who started in high school. He got a reputation here in Arlington. Clean up is perfect. Very dependable.

Description of Work
Complete services of the yard. Mowing, fertilization. He done the sod. He does the shrubbery.

He is a young fellow who started in high school. He got a reputation here in Arlington. Clean up is perfect. He was treating the bush like his own. Very dependable.

Description of Work
Complete services of the yard. Mowing fertilization. He done the sod. He does the shrubbery.

He is a young fellow who started in high school. He got a reputation here in Arlington. Clean up is perfect. Very dependable.

Description of Work
Complete services of the yard. Mowing fertilization. He done the sod. He does the shrubbery.

He's done my work for 10 years. It's by service. We agree to do certain type of work and he gives me a rate per hour or per person for each work. I sign off on it to do this, do this, do this. I sign that he does it. I haven't gotten the bill but it will be reasonable. Sometimes, as many as 4 people come out. If it's going to be cutting grass, trimming, hedging and cleaning up, I say they do it in about 15 minutes. Excellent. It leaves a real nice pattern too.

Description of Work
I had some work and the back has to redone. They came out to give me an estimate for what has to be done. They had a guy come out the next day. He came out and did some kind of fertilization as well as some kind of treatment they do for crab grass. They do everything. They do the leaf pickup in the winter and summer. They mulch. They trim the shrubbery when it needs to be trimmed.

Sean's is efficient and reasonably priced. Lawn looks great, and Sean is helpfully responsive by email (since they usually mow during the day when we are not around).

Description of Work
Spring cleanup, weekly mowing, some periodic weeding over the summer

The last owner of our house and several neighbors had been using this company for various lawn work in the past. So we carried on with them without giving too much thought. For weekly mowing, they have done a good job. For other assignments, however, there has been a tendency to overcharge, to an unreasonable degree. Even worse, the owner acts aggressively rude when charges are disputed. Recently, we made the mistake of letting them weed without getting a quote beforehand, only to discover later that they charged triple of what I expected. Because I was not there to supervise the work, I gave them the benefit of the doubt and paid in full. Two weeks ago, having learning the lesson, I requested a quote for trimming hollies in the front yard. He quoted 16 hours and almost $600. I declined. We negotiated a solution that I'll be present with his crew and it'll be my call to stop the crew at my discretion. On the day, his crew showed up and the foreman agreed that they'll cap the charge at three man hours. The other two crew members witnessed the agreement, and the foreman called his boss to confirm. The end result was okay but not great; but that's the trade-off I preset and accepted. However, when the bill came in, the charge was double the agreed amount. When I raised this with him, he brushed me off. Confronted with facts, he conceded but with a shocking move to unilaterally terminate the service contract, with his signature and company letterhead, for the whole year, with immediate effect and zero notice; and he's done so through a rude e-mail. In fact, we have observed for quite a while that more of our neighbors have switched to other lawn servicers. They must have had reasons. We will do the same, and will not use this company again.

Hi [member name removed], I appreciate your patronage and will evaluate this feedback. My company strives to provide excellent service to our customers and takes great pride in the care and maintenance of our properties. I’m sorry you had a negative experience and I regret we were not a good fit for each other. Best, Sean
5.0

Absolutely perfect. Thank you Sean for an outstanding service. Very professional as well. I contacted him and he replied in a timely fashion. He showed up on-site a couple of days later and went over the plan along with a rough estimate on the spot until a formal one emailed the next day. We had a few days of rain and therefore we waited. The first day after it stopped raining, his crew was on-site in the morning. All I know at this point, it looks great.

We have been using Sean's Lawn Service for years. They are professional, courteous and quick. We just don't worry about our yard looking neat with Sean's in our lives.

Description of Work
From April through October, the men have mowed, edged, trimmed, cleaned the walkways and porch with the power blower and bagged clippings for the trash pick-up once a week.

They always do a great job - always timely and have even worked around our schedules when we have needed them to. I highly recommend them.

Description of Work
I use Sean's service throughout the year to mow, clean leaves, mulch, weed - general lawn care. I also have them clean our gutters.

Always the work is done promptly and is thorough. You can't do any better than Sean!

Description of Work
Clean gutters, lawn care, grass mowing, landscape maintenance, and leaf removal are all things that Sean has done for us in our many years of employing his company.