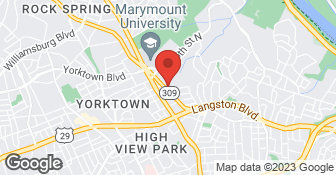 In the 10 years I've owned my home, this is my LEAST favorite contractor. The contractor has made some attempts to fix the problems but in the end I've had to accept a discount and live with inferior workmanship. The work was done to turn an uninsulated sunporch into a weatherproof room off the main house. Exterior wood was rotting and the roof was leaking. I hired Arlington Designer Homes because of their commitment to energy efficiency. The only aspect of this job they did well was insulate and caulk. three years later the corners of the sun porch still leak. it is unclear whether the drafty, yet expensive high R/U value door was flawed in the manufacturing process or installed wrong. We came home one windy fall day and there were leaves indoors where they had blown in between the two sliding doors. The manufacturers solution was to put spongy foam between the doors. Basically we spent a lot of money but did not get the fix we were looking for. When I complained of the leaks in the corners of the sun porch, the contractor did promptly come to look at it, told me to caulk, which I did but there is still moisture damaging the drywall in the corners. The cabinet construction was done so poorly that the Contractor ended up not charging us for it. It was not built evenly. We also didn't get charged for the new storm door because the contractor drilled the holes for the wrong location and simply filled with caulk. Measurements were not taken when building the cabinet and the outlet covers had to be cut in order to fit around the wood rails of the cabinet. Measurements were also not taken when installing the carpet. A gap can be felt in the pad underneath, even after I had them reinstall it. Will not hire this contractor again.

ARLINGTON DESIGNER HOMES, WAS SURPRISED AND CONCERNED TO SEE THIS REPORT POSTED NEARLY FIVE YEARS AFTER THE PURCHASE OF THE HOME, AND WE WOULD LIKE TO OFFER SOME CORRECTIONS. DURING AND AFTER CONSTRUCTION THIS HOME PASSED ALL ARLINGTON COUNTY INSPECTIONS, AND WAS UP TO CODE. AFTER CLOSING, THE OWNER CONTACTED BUILDING INSPECTION SERVICES, AND BECAUSE THE OWNER HAD COMPLAINED, INSPECTION SERVICES ASKED ARLINGTON DESIGNER HOMES TO ADD SOME ADDITIONAL ROOF BLOCKING. THIS SPECIAL REQUEST WAS COMPLETED, AT NO COST TO THE OWNER, IN A TIMELY AND PROFESSIONAL MANNER, ALTHOUGH WE WERE UNDER NO LEGAL OR ETHICAL OBLIGATION TO DO SO. WE RECEIVED NO OTHER CALLS OR COMPLAINTS FROM THE OWNER TO RECTIFY THE PROBLEMS HE CITES UNTIL THIS POSTING. IF WE HAD BEEN CONTACTED WE WOULD HAVE RESPONDED PROMPTLY. THIS BEAUTIFUL AND WELL CONSTRUCTED HOME WAS PURCHASED FOR $416,000 AND NOW HAS AN ASSESSED VALUE OF OVER $725,000. ARLINGTON DESIGNER HOMES HAS BUILT MORE THAN 60 HOMES IN AND AROUND ARLINGTON OVER THE PAST 25 YEARS FOR MANY SATISFIED HOMEOWNERS. WE STAND BY THE QUALITY OF OUR WORKMANSHIP AND CUSTOMER SERVICE. THIS WAS ONE OF 9 HOMES BUILT IN THIS SUB-DIVISION AND UPON REQUEST WE CAN PUT YOU IN CONTACT WITH OTHER OWNERS WHO WERE COMPLETELY SATISFIED WITH OUR CRAFTSMANSHIP, AND SERVICE.

We are a painting service that makes your home beautiful. We provide interior and exterior paint jobs, we do drywall repair, power washer, wallpaper removal, cabinet painting, staining decks We're organized, clean, also we provide an excellent environment for our clients.  …

Friendly Painting & Construction INC is premier painting and home remodeling contractor in the Washington Metropolitan region for over 20 years. We have 12 professional employees can handle top level painting service and full line of home remodeling services. We do accept credit card and check for payment. Our Virginia license number 2705 129520A , Maryland license number MHIC 92480. For estimate call Tom Seo at 571-225-1756 or Sam Kim at 571-225-6112  …

Bonded
Insured
All statements concerning insurance, licenses, and bonds are informational only, and are self-reported. Since insurance, licenses and bonds can expire and can be cancelled, homeowners should always check such information for themselves.To find more licensing information for your state, visit our Find Licensing Requirements page.
General Information
Free Estimates
Yes
Eco-Friendly Accreditations
No
Payment Options
Check
Senior Discount
NO
Warranties
Ask for details

ARLINGTON DESIGNER HOMES INC is currently rated 2 overall out of 5.

No, ARLINGTON DESIGNER HOMES INC does not offer eco-friendly accreditations.

No, ARLINGTON DESIGNER HOMES INC does not offer a senior discount.

No, ARLINGTON DESIGNER HOMES INC does not offer warranties.