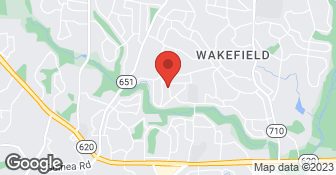 We specialize in new work for both residential and commerical electrical service and repair. We offer quality work at competitive rates. As a family-operated business, we work in various locations throughout the DMV area.  …

Everything went great and according to plan. Better than I could have imagined.

Description of Work
We needed exterior trim replaced and painting.

Recommended by a friend, Mr. Knight's honesty, timeliness, and attention to detail exceeds any other contractor I've used. He goes beyond the proposed scope of work to ensure the customer has a quality product in the end.

Every job done was excellent. Great suggestions and terrific regarding details.

Two men came out. He keeps everything in check. He knows what is going on. He is always the one here. He performs the work. The batroom took about a week. The kitchen took about a three weeks. He took down a wall and re-did a door way. They do quality work.

Description of Work
He did a bathroom and a kitchen.

Mr Knight and his team have done a great job for us on two separate jobs in different houses. Lawrence is creative, meticulous and extremely professional. He helped us pick tiles for the master bathroom shower and also suggested designs for closets. He has great taste and we trust his judgement. Also, they completely stand behind their work and never leave things done half way. Both of our project...

Description of Work
complete remodel of kitchen and three bathrooms, installation of kitchen cabinets, appliances, plumbing hook up, custom tile shower in master bathroom, install hardwood floors in the dining room, and tile in bathrooms and kitchen. hook up electrical supply for the built in microwave and built in lights, paint walls and trim, install closet doors and blinds. in a different house, A-1 painted 6 rooms plus basement and hallways (walls only) and remodeled closets in 3 bedrooms.

We had 2 plumbing issues. 1. secure the wax seal on a toilet 2. remount toilet in a VERY small space/bath A-1 was prompt, very efficient and got both projects done perfectly. We would definitely recommend!!!

The job took longer than he estimated but he stuck to his price and did a great job. He came prepared with all his materials. Once he started the job we worked every day to finish it. Doors worked like new and we had a painter come and paint the shed. Looked great! House sold! End of story. He is very kind, honest, patient, and trustworthy. He warned us of potential costs in advance and gave us choices of what WE wanted to do. He's not a high pressure salesman and kept me in the loop during the project, constantly asking me how I wanted it. He was interested in helping us fix the problem however WE wanted it, unlike other contractors who just do it to get it done in a hurry and then you're stuck with their work. I'd say he's a rare find. His handy work saved us thousands in headaches. When he did the job, he generally worked alone but brings in help as needed. I don't know if this is still the case. I've called him for other jobs, but he was booked at the times we needed him. I'd definitely use him again.

Description of Work
The company owner lives in the area and came highly recommended from other neighbors via a neighborhood online forum. We planned to sell the house so were just trying to fix things and make them right before putting it on the market. We had a carport with a built-in storage shed. The shed's door jam was in poor condition due to old termite damage and the base of the shed framing needed replacement due to water exposure. The doors were still in excellent condition. Only the jam and base of the front walls of the carport needing replacement. No contractor wanted to do the job and keep the original doors except this guy. The wood paneling facing the street was no longer available and was a specific style from the 1960s Everyone else wanted us to buy new pre-hung doors in a frame, which would have cost us over $2000 in materials alone plus labor, and replace the shed framing plus then have the carport covered in aluminum siding to hide the difference in replacement siding. Where do you stop siding? Then it could become a huge whole house trim job.... all for fixing a door jam.

We chose this company because he was willing to keep our doors, which were in great shape. Every other estimate required we replace the whole doors and frames, which would have cost us $1-2000 in materials alone. Only the frame around the doors and the base of the framing holding up the walls needed replacing. He came in the middle of winter to do this work on the exterior and did a great job. He worked alone. The doors fit perfectly. I learned about him on our community list service. He is very honest and does a quality job. I would use him again for carpentry work. I know he also does painting.

Last February I called Mr. Knight when I discovered an outdoor faucet (still connected to a hose) covered with ice. Fearing I had a burst pipe, I asked him to look at the faucet at his earliest convenice. He arrived the next morning at 8:30 AM. He determined that I did not have a burst pipe. He put new packing and new washers in the faucet, but warned me that the stem might be warped and that the seat might be ruined. He did not charge me for that service because he feared he had not fixed it. Sure enough, I had to call him yesteday and tell him that the faucet was leaking again. Bottom Line: last february he tried to save me money with a quick fix, but warned me what might happen. Today I was glad to pay him for replacing the faucet and for doing the job before cold temperatures could lead to a burst pipe and a big bill.

Description of Work
I called Lawrence Knight yesterday evening and reported two problems: an outdoor faucet was leaking and a toilet was leaking. He arrived this morning promptly at 9:00 AM as promised. He replaced the outdoor, freeze-free faucet (included soldering). There was no cut-off valve inside the house, so he had to cut a hole in the dry wall in order to reach the pipe and cut the water line. Once he replaced the faucet, he patched the hole in the drywall and painted over it. Can't even tell that a hole was cut in the wall. He vacuumed and cleaned up after completion of the work. As always, Mr. Knight was prompt, cheerful & courteous. I have called A-1 Handyman (Lawrence Knight) repeatedly since he completely renovated our north Arlington home in 2005. That included: two bathrooms, tile work, painted interior of five rooms, kitchen, drywall repair, indoor lights, mirrors, fans, vents, two exterior doors, five interior doors, faucets, carpet installation, hard wood floors, thresholds, and more. My wife and I trust Mr. Knight totally. I give him a key to our home when he works here. I am delighted that I do not have to watch over him. He takes great pride in his work. Always a gentleman, he is polite, honest, and well-mannered. He is bi-lingual (English, Spanish). He completed the two jobs in my home today within three hours. He works fast and efficiently. We have never had a problem with his workmanship. Since 2005 he has done approximately $40,000 worth of work on our home. Obviously, we are very satisfied customers. We have referred Mr. Knight to over 15 of our friends, and they have nothing but praise for him and his work.