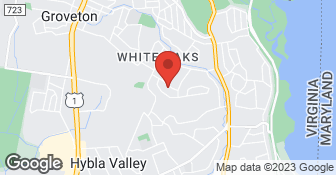 Christine Kelly helped us through a project we had dreamed of for years, but for which we had no previous experience. She made repeated visits to the house to help us formulate and refine our ideas, adding many good suggestions along the way. We appreciated her patience, as well as her professional skills, and she was a delight to work with. We have been back in our house for about a year. We are enjoying our new space immensely and receive positive comments from all who visit. A project like this requires endless decision-making - we feel that hiring Christine was the best of all the decisions we made!

Description of Work
Design and plans for major home renovation. We put on 2-level addition, enlarging the kitchen and adding a master bath and walk-in closet. We added a 2nd story to another part of the house to create a library.

Description of Work
Scheduled appointments and then cancelled. Stated she had received an award winning project (apparently we wouldn't be award winning enough????)and after reviewing her work load would not have time for our project. This was after numerous emails stating she was eager to keep our appointments.

Having finished paying college tuititon, my wife and turned to major house renovations. At no initial cost, Christine patiently listened to our rather general ideas for the renovation, asked a number of questions, and then came back several weeks later with exciting design ideas. Aside from bumping out the kitchen another five feet to finally give us the counter space we so desperately needed, she suggested extending the front of the house where the front door was located. The problem she solved was the fact that there was no front porch (typical for homes in Hollin Hills) and the entry way vestibule was small and cramped. By extending the front of the house out and also adding a cantilevered roof, we not only gained cover during inclement weather, but also a small reading nook directly above the now expanded vestibule. Furthermore, once we selected a general contractor, she regularly stopped by the house to monitor the renovation process. One time she noted where a kitchen floor vent was going to be located and suggested it be moved to a more unobtrusive location. The work is now completed, and friends and family who have seen our house in both and quot;before and afterand quot; conditions are impressed with the results. We feel very fortunate we chose Christine as our architect. Other neighbors in our area who have used her services have expressed similar sentiments.

Description of Work
Christine provided architectural plans for a major kitchen renovation to include expanding the footprint and also adding an extension to the front of the house. She devised creative ideas that had never occurred to us and which have resulted in a home whose interior and exterior appearances have truly been transformed.

Christine did an absolutely super job... first giving us some rough alternatives and once we decided upon the general layout preceeded to do a detailed design utilizing the exisitng appliances/ cabinets. Since we were in Kentucky while much of this was being done she took care of all of the details fo getting permits and dealing with the County (which was not easy). She worked with the builder in our absence to help make decisions as the act5ual work progress. The end result exceeded our expectations and we could not be happier.

Description of Work
We wanted to make extensive remodeling to a 1960's single family house to make it user friendly in case of a handicaped need and to utilize kitchen and bathroom cabinets and applicances from a late model house that was also being remodeled. Christine measured all of the cabinets/appliances and came up with a design that accomplished what we wanted. She recommended a couple of builders and then corrdinated with the builder we selected and Fairfax County to accomplish the renovations

Great Falls Septic Service is family owned and operated and has been serving the local Northern Virginia area since 1953. The owner David, runs the business with his three sons Joshua, Jacob and Jordan. They relentlessly and successfully carry forward the legacy founded by David's father 60 years ago. We are dedicated to our customers and able to provide excellent service due to our experience in the field. We will do everything possible to cater to our clients. Family owned & operated. Phone number(s) 540-545-7075 or 703-444-5600. Fax number 540-545-7077  …

NOW OFFERING VIRTUAL INITIAL CONSULTATIONS! All you need is a phone with video chat (such as FaceTime) or a laptop or tablet with internet access and we will “meet you in your home." To schedule your virtual consultation, go to WWW.MARKSWOODS.COM/CONTACT and fill out the form. Marks-Woods Construction Services is a full service general contractor serving Virginia and Washington, DC located in Historic Old Town Alexandria, VA. We have a complete array of services and project types to serve our diverse clientele, including residential and commercial construction. Teamwork is emphasized in our project management style. MW strives for positive collaboration with our clients to achieve all project goals. Customer service and successful communication contribute to our high percentage of repeat clients. Our service is what separates us from our competition. Our company's growth has been consistent, yet conservative by design. MW carefully selects projects that match our resources and skill set to ensure jobs are completed successfully, within budget, and on schedule. MW provides premium quality at a competitive cost with proven reliable performance, while maintaining a safe work environment. MW self performs the majority of its work, rather than using subcontractors. This allows MW to pass along significant cost savings to our clients, along with also providing a higher quality project, in a more aggressive time frame. Ready to discuss your project with the Marks-Woods team? We'd love to chat. For immediate assistance, please visit www.markswoods.com/contact and fill out the Contact Us form today!  …

Whether you want to remodel your existing home or build a brand new one, Thomas Custom Builders can help. Our 70+ years of combined experience as Northern Virginia general contractors and our commitment to quality ensures your custom construction or design-build project will be a success. Be it a master suite, custom kitchen or home addition, we dig deep to learn what’s making you spend your time and resources on this particular project. We honestly discuss the costs associated with your goals, then we deliver what we do best: excellence in custom remodeling. The only thing that counts is finishing your job exactly the way you want it. No compromise.  …

Insured
All statements concerning insurance, licenses, and bonds are informational only, and are self-reported. Since insurance, licenses and bonds can expire and can be cancelled, homeowners should always check such information for themselves.To find more licensing information for your state, visit our Find Licensing Requirements page.
General Information
Free Estimates
Yes
Eco-Friendly Accreditations
Yes
Payment Options
Check
Senior Discount
No
Warranties
Ask for details

Design and construction drawings for residential additions and new homes

Crafted Architecture LLC is currently rated 4.8 overall out of 5.

No, Crafted Architecture LLC does not offer a senior discount.

No, Crafted Architecture LLC does not offer warranties.

Are there any services Crafted Architecture LLC does not offer?