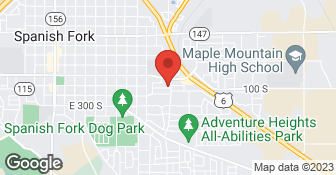 Powerhouse Paint and Coatings is a Colorado Based Painting Contractor and has earned it's reputation by providing the highest-quality work while taking the utmost care of customers' property. As a leading painting contractor in Colorado Springs, Pueblo and the entire Front Range, our first priority is to do the job right the first time and every time while establishing LONG-term customer relationships

Poor quality, poor follow through, and dishonest. Our estimate was for two coats of paint and they only did one. We caught them on it when we called Sherwin-Williams and Cameron then refused to allow them to provide us a copy of the invoice. Gareth did the majority of the work and literally ruined the entire job. We had to have another painter come in and sand all the trim as well as try to fix all the paint runs, mottled texture, and a host of other problems. Cameron claimed this was all ‘normal’ touch-ups. The ‘two week’ job took 2 months and the tape they used to mask off our floors ended up removing the finish on the floors it sat so long. Please avoid doing business with Cameron as he also gets defensive and rude if you criticize his work, which you can also see from his other Google reviews.

Cameron arrived and finished garage floor epoxy job on time, showed sample finishes for selection, explained process and schedule, was easy to work with, performed work at a fair price, and finished job looks really nice. We chose the "pewter" (gray) finish without added flecks or non-skid grit. Finishing a floor with epoxy takes several days due to necessary acid etching, rinsing and drying of floor, epoxy coat, clear coat over epoxy, and 72 hour curing of epoxy/clear coat before use.

The contract stipulated a lot of details that we were excited about. However, several of these stipulations were never met. For example, drop cloths to catch paint chips, proper drying time between coats, windows opened so that all sides would be painted (for which the number was counted twice when pricing). The garages were painted in warm weather and look good, after several touch-ups. The biggest failure of the entire job was the bad judgment in painting when it was too cold and rain was imminent. The back, north side, of the fourplex was painted in late afternoon (38 degrees on my vehicle mirror), the second coat immediately followed the first spray, with no dry time between coats as required in the contract. The other three sides of the fourplex were painted the next day with similar temperatures and rain started just as they finished, washing the paint down the sides of the building. We discussed these issues with Mark and he deferred the problem to our crew chief, Cameron, who turns out owns Powerhouse Paint. After getting no satisfaction, we consulted the "Application Rules" on the Sherwin Williams' website and talked with their area rep. Powerhouse eventually repainted portions of the fourplex. Because we see patchy, shiny spots when the weather is cold, our concern is that the paint has trapped moisture beneath it and will cause the substrate to deteriorate.

Description of Work
We signed a contract with Five Star Painting (Mark) to paint a fourplex and two garage buildings. The work included replacing ten rows of lap siding across the back of the fourplex, replacing several trim pieces and adding some new ones, power washing, scraping, caulking, masking, priming and painting. We also upgraded the paint and paid extra for two coats.

Everything was done to our satisfaction.

Description of Work
This crew of painters came in to finish a painting job left unfinished by an earlier individual who was unable to complete the job due to an extremely serious accident which left him hospitalized and totally incapacitated--unable to walk. They did an excellent job of completing the painting of both the walls of the house as well as all the trim. I highly recommend them.

Description of Work
I do not believe how much I paid is revenant to the evaluation of a company. What I pay should not matter on the job that is completed. This team had to perform my work without being the original sub-coontractor. They picked up quickly and work was awesome. All individuals in my home were professional and very respectful to my needs. The owner of the the company ensured I was happy with everything. I would recommend this company to anyone.

Brad was our painter from Power House - He came out on time, was very neat and professional. We allowed him to leave a few items overnight as he had to come back the next day - he put them in a neat stack. Came back the next day and finished up - everything was neat and clean and look good.We noticed a few areas that needed touch up about a week later. We called Power House and Brad came out the next morning and took care of everything. He even said call him if necessary if we find anything else and he'd be happy to come back again. We don't anticipate that. He painted three rooms, three room ceilings and all the baseboards.We are very satisfied and would call them again.

Description of Work
We have a bi-level home. The entry way, living room and hall were painted. The ceilings (textured ceilings) and baseboards for all rooms were also painted. We also had the kitchen ceiling painted as it was an extension of the living room ceiling.

Call us today for all your tile needs!  …

As J&Y Cabinet Refinishing LLC, our work is the refinish of cabinets and always making sure to give you the BEST EXPERIENCE and atention. The Company is placed in Orem, Utah. We have 8 years of experience. Estimates for free!!!  …

We do small-scale construction jobs, fences, concrete, or even changing the oil on your car. We guarantee your satisfaction, and we won’t leave until the job is done right. We pride ourselves on the quality work we provide, while delivering great customer service! Call -or- click to schedule a free estimate today!  …

How is PowerHouse Paint and Coatings overall rated?

PowerHouse Paint and Coatings is currently rated 4 overall out of 5.

What days are PowerHouse Paint and Coatings open?

PowerHouse Paint and Coatings is open:

What payment options does PowerHouse Paint and Coatings provide

No, PowerHouse Paint and Coatings does not offer free project estimates.

No, PowerHouse Paint and Coatings does not offer eco-friendly accreditations.

Does PowerHouse Paint and Coatings offer a senior discount?

No, PowerHouse Paint and Coatings does not offer a senior discount.

Are warranties offered by PowerHouse Paint and Coatings?

What services does PowerHouse Paint and Coatings offer?

Are there any services PowerHouse Paint and Coatings does not offer?