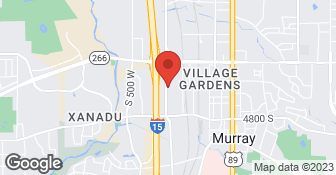 With every painting project, we're committed to providing the highest quality work and professional service in Salt Lake City. Residential painting or commercial painting, we're dedicated to the process of certainty - of a job well done. Whatever your needs, big or small, CertaPro will provide a professional quality paint job and an experience you'll be thrilled with. Additional phone - (800) 462-3782. Additional DBAs - CertaPro Painters Ltd, CertaPro Painters of Salt Lake LLC....

It went great- there were friendly, timely, and professional.

I'm so glad that you were happy with the service we provided you! Thank you for your business, we appreciate it!
5.0

CertaPro of Salt Lake did a great job on my Yalecrest residence. Originally constructed with wood siding in 1941, someone (sadly) elected to clad the exterior in aluminum probably sometime in the 1960’s. The siding was showing its age, as was the window trim. CertaPro of Salt Lake did an excellent job of bringing the exterior appearance back to life. Eric Denton, the estimator, was great to work with and quick to follow up with any questions or concerns. Lori Martin was very helpful in the color selection process. The painting crew supervisor, Ed, and his team were great also; polite, professional and they took pride in their work. I especially appreciate the care they took in not disturbing the plantings in the garden beds. Not all painting crews that I have worked with in the past are that considerate. Needless to say, I would happily contract with CertaPro of Salt Lake for any future painting needs.

[Member Name Removed], Thank you for providing such a detailed review! We appreciate your kind comments and the work that you have provided us!
5.0

Thank you for your review and your business!
3.0

I was pleased with the experience I had with CertaPro up until the end of the job, though in retrospect I may have missed a few warning signs. The estimate process was easy so I scheduled the job just a couple weeks later. The work got started midday on a Tuesday. I was put off when the supervisor had no written information and had to look at my copy of the estimate to find out what paint to buy. He also didn’t provide contact information to me, which would come up later when I really had no one to contact with questions/concerns. The painter was hired as a subcontractor and was always pleasant and polite in interactions. At the end of Day 1, I did not receive the expected daily report to understand what had been completed. I went ahead and emailed some notes to the estimator, focusing on patching that still needed to be done, since presumably that comes largely before painting. I also noticed that, despite the written estimate with a different finish for trims and doors, I didn’t see any paint for that finish (semi-gloss) anywhere I figured it might arrive later? Anyway, for Day 2 the crew was a little late due to traffic, but they worked a long day to finish ahead of schedule. I had expected them to finish the next day, but actually I ended doing the final walk through at nearly 8pm that evening. I felt rushed and uncertain, but wanted to be a good customer so I went ahead with full payment. Almost all the work that was done was very satisfactory. Unfortunately, the following items were actually never done, or I had to send many reminders to resolve: * Leftover paint was not left with me. There were several attempts to reconnect with the painter, I ultimately got 2 of the 3 colors several weeks later. I purchased a quart of the third color on my own for future touch-ups. * When the paint was fully dried, I could confirm that indeed none of the trims and doors had been painted with semi-gloss finish as described in the written estimate. * One door was not done at all, though included in the written estimate. Worse, its door frame was also left unpainted with a clear line between it and newly painted baseboards. * Finally, 2 of the 3 ceiling areas in the written estimate were not painted at all. This took me several days after the end of the job to confirm because I simply couldn’t believe it. The painter had verbally confirmed their completion during the walk-through when I asked. He later admitted these ceilings were not painted when dropping off the leftover paint, blaming misunderstandings and lack of communication. I was thankfully able to negotiate a partial refund to cover these issues. Given my experience I didn’t want this company to come back to redo anything, so now I have to spend extra to hire someone else to complete the job. I would like to believe this is an isolated incident, though as a result I can’t recommend CertaPro Painters of Salt Lake.

I'm sorry that you did not receive the typical CertaPro Painters experience. We do appreciate your review, as it points out areas of improvements for this crew.
5.0

“They did a great job for us. The work was done as promised and on time. The painting crew was very courteous, performed their work in an organized fashion, and cleaned up everything when the work was done. I was very pleased with the results.”

Description of Work
Five separate painting jobs around our home.

Great job- responsive crew to any concerns I voiced, and generous with the work they gave me. We're happy with the job they did. They preped by pressure washing, then repainted two sides of our fence and touched up the back and gates.

Description of Work
They painted our fence

I am very pleased with the quality of the CertaPro people, from the estimator Tyler, through the job foreman Miguel, to the crew (Tono, Niko, Alex, Maria and Erika). They were professional, polite, communicative and efficient. I am also thoroughly impressed with the business process, with the thoroughly detailed estimate/proposal, regular communication and a well-defined warranty. And of course, the paint/stain job on our outdoor deck was excellent. I'll be having CertaPro back to do the interior of my home when I'm ready for that.

Description of Work
paint/stain job on our outdoor deck

The estimator came out, reviewed my house and requirements and told me he'd finish the estimate and send it to me last night. I never received an estimate. I called the office after 2:00 pm the next day, spoke to the office manager and she said she'd get hold of the estimator and call me. I did not get a call from the office manager so I called back in about an hour and she said he was on his way to another appointment and he'd get the estimate to me. I told her not to bother, because I decided to give the job to someone else. The estimator never contacted me about the estimate after he left my home. There service does not match the ads they have on TV. Hence the rating of F.

The CertaPro painters completed a job on main floor and finished basement. The estimate was within the amount we had planned although not the lowest bid. We chose CertaPro based on the representative's explanation of the use of paint teams and the offer of the assistance of a decorator for color selection. The paint crew was wonderful to work with and did an outstanding job in a somewhat challenging home: high ceiling over the staircase as well as necessary repairs. The results are inviting and pleasing to us. We would recommend CertaPro to anyone looking for a quality paint job.

Description of Work
painting of rooms on two floors

Description of Work
Power washing and painting exterior of house.

We specialize in interior and exterior painting services, staining, cabinet painting, and more! We guarantee your satisfaction, and we won’t leave until the job is done right. We pride ourselves on the quality work we provide, while delivering great customer service! Check out all the services we offer below and call -or- click to schedule a free estimate today!  …

How is CertaPro Painters® of Salt Lake overall rated?

CertaPro Painters® of Salt Lake is currently rated 4.6 overall out of 5.

What days are CertaPro Painters® of Salt Lake open?

What payment options does CertaPro Painters® of Salt Lake provide

Are warranties offered by CertaPro Painters® of Salt Lake?

What services does CertaPro Painters® of Salt Lake offer?