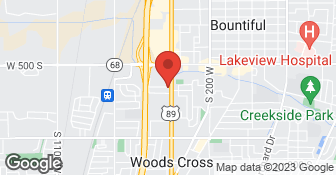 We sell and install Carpet, Wood, Tile, Stone, Vinyl and Laminate Flooring. We also sell window blinds and shutters. We are a family owned business, established in 1948. Financing is available....

Allmans was recommended by a friend. Sales, measuring, installation were all a great experience. Price was more than competitive with a big box store

In a nutshell, I spent $1000 less than a big-box store's estimate and got higher-quality carpet! I purchased a foreclosed townhome which needed about 1700 square feet of carpet and pad. After getting estimates from a major chain store, it was apparent that the only carpet I could afford was their 'special buy' carpet, which felt rough, looked cheap, and was not available in a color I liked. So I started looking for local carpet companies that might give me a deal on some remnants for the bedrooms and attic-- I figured this might save money and it didn't matter if those places matched the main living areas. I stopped by Allman's Carpet after seeing their classified ad in a local paper's online search. I let the salesman know I was on a limited budget and wanted to look at remnant pieces. Craig (or was it Curt?) let me into their remnant warehouse, and showed me dozens of carpet pieces that might work for my budget and color scheme. I was so impressed with how he treated me-- even though I couldn't afford to buy carpet off the regular salesfloor, he spent a lot of time with me and never seemed disappointed in my small budget. After asking me more details and searching the inventory, he realized that they had a spare roll of high-quality carpet in my desired color that would cover my whole house, with no mismatched remnants, for about $1000 less (including labor and same-quality pad) than what the major chain had estimated using the El-Cheapo carpet! The installation went well, and the work seems to be high quality. I would recommend Allman's Carpet to anyone on a budget. I gave Allman's a B for punctuality for two reasons. First, Craig (Curt?) was an hour late in coming to the property for the estimate, and second, the receptionist who set my installation appointment told me that the job would be completed in one day, but it actually took two days. On the first day the workman installed all the pad, the second day all the carpet. He arrived on time both days but the job took longer than expected. The job may have taken longer because only one workman (and his teenage son, who may or may not have been helping-- I only stopped in at lunch time) was assigned to my job. I wonder if having only one worker on the job reduced costs for the company, which allowed them to give me such a great deal. In any case, the carpet installation appears to be high quality and it was done in a reasonable amount of time for an awesome price!

Description of Work
Allman's Carpet helped me select 1700 sq ft of high quality low-cost carpet from their remnant warehouse, which they later installed.

Utah Flooring & Design Services all of Salt Lake County, Utah County, Davis County, Summit County, and the surrounding areas. What really separates Utah Flooring & Design apart from the other guys is our unmatched attention to detail and high standards, custom installation, Lifetime Warranty, and outstanding customer service. Utah Flooring & Design Specializes in Tile, Backsplashes, Showers, Fireplaces, Hardwood, Laminate, Vinyl, LVP, Carpet, Granite, Quartz, Baseboards, & Interior Paint Being a locally owned and operated business makes it really easy to reach us for any questions you may have, or even look over our samples. We care about the quality, look, and feel. We only use the highest quality materials in order to ensure our customers satisfaction and offer a Lifetime Warranty.  …

From Hardwood Installation to Hardwood Refinishing to Laminate and Vinyl Installation to Tile Work. At Modern Flooring Services, We Provide Fair Prices, Top Tier Installation Crews, Modern Technology Integration and Professional Management In Order to Make Your Project as Hassle Free as Possible. Bringing Your Vision for Your Flooring or Shower Into Reality  …

All Flooring and Installation

How is Allman's Carpet overall rated?

Allman's Carpet is currently rated 5 overall out of 5.

What days are Allman's Carpet open?

No, Allman's Carpet does not offer eco-friendly accreditations.

No, Allman's Carpet does not offer a senior discount.

Are warranties offered by Allman's Carpet?

What services does Allman's Carpet offer?

Allman's Carpet offers the following services: All Flooring and Installation