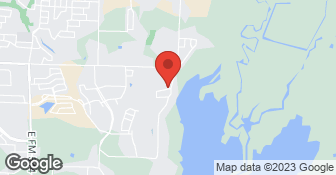 General Contractor-no job too big or too small....

Thank you for your interest in our business. We specialize in the Installation and repair of your garage door and automatic opener. We can repair broken springs, hung doors, broken or bent panel replacement, doors that won't close, doors that won't open, stuck doors, crashed doors, steel doors, wood doors, glass doors, aluminum doors, remote controls, and ugly doors.

Since 1977, our locally family owned and operated residential garage door and opener company has served customers in Collin and Dallas Counties with award winning customer service! We provide free in home estimates, same day repairs, and top quality installations from certified technicians in fully stocked company trucks. We schedule 30 minute arrival windows and even send a link for you to track our technician in route to your home! Our emphasis on quality, reliability, affordability, and integrity are backed by our satisfaction guarantee. Our company and all our technicians are certified by the Institute of Door Dealer Education and Accreditation (IDEA), and our company was awarded the International Humanitarian Award from the International Door Association (IDA) in 2017. Call today and experience a whole new level of customer service!

Bobby Williams was hired to do a simple job on one of our rentals. Repairing some floors and cabinets. He took the deposit, half up front, and then continuously didn't show up to work, never once doing any of the job we hired him for. He ran off with the $1,100 and when we started reaching out to him about returning the money so we can hire someone else, he completely stopped responding. We've sin...

Bobby Williams' repairs were performed professionally, in a timely manner and at a great price. Can recommend him whole-heartedly!

Bobby (BW Construction) was hired as the construction crew for a job I needed done on my home.  The person that hired Bobby was a personal friend that I have known for 20 years.  He was very persistent on doing the job and guaranteed me, in writing, that they would do the job right, not screw me over like other contractors had and that they had insurance and experience.  I finally agreed to let th...