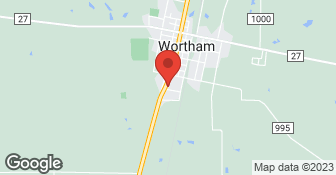 It went well. They finished ahead of when expected, cleaned up and hauled away all the old equipment. Very friendly and willing to help answer all questions.

Description of Work
They have done HVAC repair for us a few times and most recently did complete installation of 2 new HVAC units. Feel like all their service charges have been very reasonable.

What stands out the most is that they are very professional. They do a good job.

Description of Work
They come out twice a year for maintenance.

I called Wortham Heating & A/C because my unit had stopped cooling overnight. They took my information and said they would send someone out. I was at work but my children were home so I called to get an estimated time of arrival. The receptionist told me that I should've called through the night to leave a message because I was number 16 on their list, calls are answered in the order received & she wasn't sure if they would get to me that day. They were still working on calls from the day before and stopped working at 5pm. Well I couldn't leave my children home with 100+ temperatures. I mentioned my dilemma to a coworker who recommended another service provider. I called them and they were on their way immediately with a cheaper call out fee than Wortham's. When I called Wortham A/C back to cancel she told me that she'd just dispatched someone out to my location at that time (this is 30 minutes after my first call). I asked about the others who were on the list before me and she said someone had canceled. Well if I was number 16 several "someones" would have had to cancel. I still canceled & when the other company arrived, they diagnosed the problem & had my unit back working within 10 minutes. And all for $150.

Description of Work
Service request was canceled because of the delay in responding.

I have used Wortham Air for the past several years. I have two rental cabins on Lake Richland Chambersa and whenever there is any type of A/C or Heating problem they are there very promptly. I had nursed the condensor the past couple of years and it finally went out. When it is 107 degrees here in Texas, you need relief fast. They diagnosed the problem, replaced the defective part and we were cooling again. The next day renter in other cabin had a/c go out. Wortham Air was out within 1 hour of my call and replaced the motor that had gone out overnight.

In Texas, the seasons can drag the temperature all over the place. Once you realize your AC or heater isn’t working properly, you need help from a Waco heater and AC repair service company with experience. At 3C Mechanical Technologies, Inc., their team offers same-day service to get you set up with the right equipment at the best price. They offer free quotes on new installations, so give them a call today to schedule your service. The NATE-certified technicians at 3C Mechanical Technologies, Inc. are committed to your satisfaction. With their helpful advice and skilled craftsmanship, you can rest easy knowing they’ve got it all taken care of. With Energy Star-certified solutions, you can save money without ever having to suffer through another sweltering summer. Call today to schedule your free quote and get started on making your home the indoor paradise you always knew it could be.  …

Bonded
Insured
All statements concerning insurance, licenses, and bonds are informational only, and are self-reported. Since insurance, licenses and bonds can expire and can be cancelled, homeowners should always check such information for themselves.To find more licensing information for your state, visit our Find Licensing Requirements page.
General Information
Free Estimates
Ask for Details
Eco-Friendly Accreditations
No
Payment Options
Check, Visa, MasterCard, American Express, Discover
Senior Discount
No
Warranties
Yes

Wortham Air Conditioning Inc is currently rated 4.8 overall out of 5.

No, Wortham Air Conditioning Inc does not offer eco-friendly accreditations.

No, Wortham Air Conditioning Inc does not offer a senior discount.