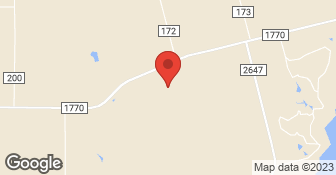 Nothing short of a scam. He did not do work to his quote, promised to fix the problems and never did, then claimed that he had spent nearly all of the "required" deposit and refused to provide a list of expenses. He tried to build the slab however he felt like (despite the engineering specifications that he quoted to). The best thing I did for the project and the integrity of my foundation was fire him. I lost money to do so but he was incapable of building it to the required specifications. Full story as follows: I hired Larry White based on a low quote and a projected confidence with the job. We hired him for a bathroom slab that would be added to the existing foundation. At the time of the quote I provided him with a copy of the engineering drawings and specifications. He quoted to the engineering drawings and specifications and even provided an accurate description in the quote (perimeter beam dimensions 12" wide by 36" deep, plastic rebar chairs to be used, all work to engineer's specifications). He quoted $3650 and requested 1/2" down for materials. I was reluctant but he insisted. Problems: I had previously dug the trenches to a 30" depth and so all he had to do was complete the excavation to a 36" depth. I came home the first day and he had back filled the trenches to a 20" depth with topsoil and not even bothered to tamp the soil. This was not to the engineer's specifications for approved back fill (also, all back fill must be tamped to resist a pressure indentation test). He had also backfilled under the pad in the same manner, untamped topsoil. He had also "completed" the form work according to him. One form was sloped at 1/4" per foot (should be level). The existing slab was to be drilled to a 6" depth, two holes every 18", so that rebar could be epoxied into the existing slab in order to "tie" the slabs together. Larry White drilled one hole every 24". One of the support beams had not been dug. One of the support beams was not framed. One of the support beams was only dug 7" wide (instead of the engineer's specification of 12"). He also back-filled over the plumbing main so that I had to re-excavate for the plumber to do his job. When I confronted him about these issues the next morning he and his crew was very quick with excuses, telling me that they had always done it this way and that the slab was not going anywhere. He finally agreed to make the changes and so I gave him a second chance. When I returned at the end of the second day he had not fixed anything and had left halfway through the day. On the third day I told him that I needed to go with another contractor because this was not going to be approved by the civil engineer (required for passing city code). I requested a list of expenses so far and a reimbursement for the difference. Over a week later after calling and emailing him repeatedly he finally told me that he had managed to spend $1490 so far and would give me back $310. When I asked for a list of his expenses he didn't say anything. I finally told him to bring the check over because I realized that if I didn't take the $310 I wasn't going to get anything back. My estimation of his expenses are as follows: Half of the re-bar required for the project (he left half of the re-bar there and either took the rest or just never had enough to finish the job per the engineer's specifications). $200 Re-claimed wood for the forms (many boards were broken, twisted, had nails and screws in them). I will say maximum (price new from a store for all of this wood) $300 1.5 day labor (3 people on the 1st day, 3 people on the second half day, though they didn't do anything) - 36 hours - Even at $15 an hour, that's only $540 When I confronted him about this he never responded. I will now take this to civil court and file for a full reimbursement. My only estimate for why he would take the course that he did is that he was skimping on materials for a larger profit margin. By not digging the trenches to depth he would have used significantly less concrete, less rebar, and less labor. Saving himself money and at the cost of building a quality foundation that he promised to build.

Description of Work
He claimed that he would build a slab for a bathroom addition to my house at a reasonable rate and to the engineer's specifications.

He did a very good job except for me cleaning the concrete. That didn’t work out very well but that is probably my fault. I asked him to add color to the concrete and that turned out very uneven but I don’t know if I waited too long to do the acid treatment on that, I don’t know what caused it, I should ask him. Other than that, he did a very good slab. He was very reasonable. He was very professional. We didn’t really set a time, we just picked a few days so when the weather was good he came, when he was available because it was during the bad weather time so I didn’t set a time.

Description of Work
I used Affordable Concrete Specialist to have a 14x20 concrete slab put in.