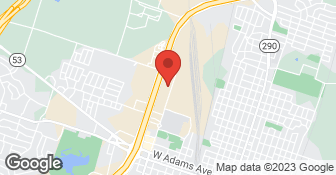 --Veteran Owned-- We have been in business since 1972. Specializing in Roofing and Re-modeling. Owens Corning Preferred Contractor for all of Bell county. Highly experienced employees some with 25+ years with us. We stand by our work....

Very well done! Got it done in one day. Beautiful!!! They cleaned off old roof shingles, repaired any problem and then did the shingle. Absolutely perfect. Very satisfied.

I called Ron Bickel, he's right down the road here from where we live and I talked with him for a bit.? He came out here and gave me a nice bid.? In fact, he underbid the handyman by about $1,500 and his company had put up the original cover, so I says "hey, go for it."? And they did.? He said it might be two weeks before he got to it because of the rain we were having, and he turned right around after we had talked one time, and I think it was on a Sunday he came out here to do something.? On Monday morning he came out, and next thing you know I got a phone call.? I says yep; he said "this is Ron."? He says "my crew's gonna be there in two hours or in an hour." And they showed up.? They did the thing.? They started at 9:00 and got done by 3:00 and it looks fantastic - paid them, that's it.? Ron gave me a number and exactly what was going to be done.? His bid was $1,480; that's what I paid him.? The patio cover is beautiful.? I have people coming over looking at saying, "hmmmm, how do I get one like that?"? He had been here before.? He did the original patio cover and it was stuff that I had bought down at a nationally known provider, which is that cheapy plastic corrugated stuff.? They put it on and that was fine.? And then I had a problem with it again, and they came out one time.? Unfortunately, the guy that was living next door was drunk as a skunk and he came out and started screaming and hollering at them about being in his yard and he chased them out.? I turned right around and called the police on him.? But by that time, these guys said hey we're not gonna take the risk, so they left.? This time they came out and we didn't use that cheapy stuff.? He got some corrugated that they use on commercial buildings.? It's a white corrugated plastic, but it's a thick plastic, so he put that on.? He put that up, plus the flashing and everything else.? I think it really looks great.? If something happens, I don't have to worry.? I could call Ron and he'd be out here in a heartbeat.? He and I kind of have a symbiotic relationship.? He was a Marine; I was in Coast Guard, and we kind of were both old service guys. What they did was, they put a cover over an enclosed patio.? It's between the dining room and one of the bedrooms, and they put a wall in there and they enclosed it that way.? We use it for the kitties.? We put a cover on it and a screening area so that they can't get out, but they can go out there on the patio and they can be out there all day, rain or shine, and stay outside so we don't worry about it.? I couldn't do the work that they did because my field of endeavor for God knows how many years was taking care of patients with liver disease, so me and a hammer don't get along too well together.?

Description of Work
This was for replacing the wood and an awning cover over an enclosed patio.

He gave me a bid that was $1500 lower than 1 other I received. We have had a lot of rain and he would attempt to get a day that was clear. He called the next day and his work crew showed up. They removed the old wooden cover and replaced it with better wood and a stronger cover material. They completer the job in 5 hours and built us an excellent cover. I would use them again in a heartbeat.

Description of Work
Metal roof was inspected and repaired.

Ron stuck with the job persistently and diligently through several rain storms, finally finding a hidden source of leakage that had plagued our church for years! His efforts were much appreciated!! I would HIGHLY recommend him for his business quality and work ethic--he was an incredible blessing to us!!

Ron and his crew did a great job. Rotten decking was replaced as needed, and extra attention was given to weatherproofing around the chimney. They did a thorough clean up after they finished. They even helped us find our missing dog!

The work was completed in one day! I did have to call them back about a small area where I could see daylight under the roof, but they came out the very next day to look at it. It was fixed the following day. Clean up of the yard was very good, but some debris was left on the porch from where the OSB was replaced. Apparently since they did all the work from up above, they did not see the stuff that fell on the porch. The contractor was very good about returning my calls and answering all of my questions. Would definitely use them for any future roofing needs.

Description of Work
They tore off off old roof on my house and installed architectural shingles. Also replaced OSB in damaged areas of the flat roof on porch and replaced rolled roofing with rubberized roofing.

Mr. Bickel called three days in advance to confirm the replacement day. The crew showed up promptly as scheduled and got to work. They removed all the old roofing material and dropped it into a trailer bin which minimized the cleanup process. The shingles arrived on time, and were the same lot number as requested. Using shingles of the same lot number prevents part of the roof from having a slight color variation. All of the crew laid the shingles using hammers instead of nail guns. The crew was very professional, polite, and avoided tearing up my flower beds. One crew member went around at the close of the first day dragging a large magnet through the yard to pick up nails and metal debris that fell. We found no nails on the driveway at the end of the first or second day. They cleaned up the job site very well before they left at the end of the second day. They left no trace that they had been here. It took two days, as the house was 3300 feet, and the detached garage was a double garage and workshop. They had a lot of roof to replace. I don't usually write reviews, but I would recommend them to anyone who wants a quality roofing job. They are local, and have been in this area for as long as I can remember. If I ever need another roof put on, I will call Mr. Bickel again.

Description of Work
Mr. Bickel's crew removed and replaced the roof on our home and detached garage.

We requested an estimate and received it pretty quickly. We did have to wait a little bit to get the repair done due to the volume of work that was happening in the area, totally understandable,. The roofing crew arrived in the morning and was done by early evening. They did a great job and were totally self sufficient. They didn't knock on the door needing anything. Overall they were well prepared, professional, courteous and did a great job. We have had Ron repair our roof about 18 years ago and apply siding to our house. Those jobs were both done well with no complaints. I recommend Ron Bickel for anyone having their roof repaired.

Description of Work
Replaced roof on house and shed due to hail storm.

They came out to inspect roof and said I would be contacted with an estimate. After waiting for approximately 3 -4 weeks I called them and was told they couldn't do it at this time because of roof condition. They did not call to inform me of their decision. So I wasted those weeks waiting on their response.

The customer was very hard to get a hold of. The house was in such bad shape, nothing our company could help with. Sorry we couldn't help you.

Our goal is to provide unparalleled service and quality, and to stop nothing short of complete customer satisfaction for your seamless gutters.  From the moment you contact us - with dependable scheduling and a detailed estimate until the last bit of top-quality materials is installed by our professional employees - we trust that your experience will be great.  If it is not, for whatever reason, we want to know so that we can make it great. We are a fully insured and bonded contractor so you can feel confident about using our services.   Our core values are: (1) we provide legendary customer service; (2) we deliver exceptional value; (3) we make the communities we serve better places to live; (4) we never stop improving and innovating; and (5) we conduct ourselves as professionals. Our goal is 100% complete customer satisfaction and we will personally oversee all of your Seamless gutters, rain barrels, water storage, leaf guards, Rainwater Harvesting, rainwater collection systems  …

Handyman, Retiree, Superintendent Professionalism I strive to provide a professional approach and appearance Passionate I am passionate about what I do and will give 100% of my time and effort to my customers Punctual I will not allow you to wait on me. I will arrive on time, keep you informed and will not lead you astray Creative I have a creative mind and will assist when and where needed  …

Ron Bickel Construction & Roofing is currently rated 4.9 overall out of 5.

No, Ron Bickel Construction & Roofing does not offer a senior discount.

No, Ron Bickel Construction & Roofing does not offer warranties.