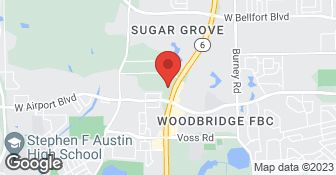 Preferred HVAC Local Business in Houston. Our comfort experts work in Houston and all the surrounding cities. We specialize in Air Duct Cleaning and Sanitization, Air Conditioning Installation, Repair and Financing.  …

Bellaire Air Conditioning & Heating, Inc is a small, family-owned and operated company with approximately 10 employees, and No subs. We offer HVAC sales & Installation, service & repair, as well as preventative maintenance and clean air products to the Bellaire, West University and surrounding vicinity of the Greater Houston area. Our decades of experience, reliable products, skilled labor, exceptional customer service, and fair up-front flat-rate pricing, sum up to the best value for our neighbors.  …

Jackson Air & Heat Is Family owned and operated, located in Sugar Land since 1982. Specializing in High efficient Trane air conditioning and indoor air quality. Jackson Air is the oldest Trane Comfort Specialist in Sugar Land, Accredited member of the BBB, Winner of the 2011, 2012, 2013,2014 & 2015 Awards for Excellence from the BBB, NATE certified and EPA certified. Jackson teamed up with TRANE, another Texas company back in 1984. Jackson knew Trane was always on the cutting edge with new innovative technology that makes them very efficient and reliable, It's hard to stop a Trane. Trane are built to take our long hot humid summers. All technicians are factory trained drug and background checked. Jackson's philosophy has always been to treat the customer and their home with respect, not to sell them something they don't need, give honest advice with lots of choices and no high pressure sale. All installations are by trained employees of Jackson Air and Heat, No subcontractors. 100% money back guarantee on new systems.  …

Late on a Sunday evening, my wife and I realized that our AC unit had failed. Not knowing who to call - and wanting someone to come out that evening - I went online and called the first business I found who would come out that evening. (This was NOT CPR Air.) A short time later, the person showed up, inspected my AC informed me that I had a and quot;locked compressor and overheated condenser fan motorand quot;. This person said I needed a and quot;start kit and capacitor partsand quot; totaling $580, however he thought I MIGHT also need a and quot;condenser motorand quot;. He even said he had and quot;not seen anything like thisand quot; suggesting that the unit might have been hit by some type of electrical surge. He also wasn't sure how long the repair would last, so I requested a quote on an entirely new unit. (Keep in mind, this unit is less than 8 years old.) It was hot - I just wanted the AC fixed - however the person didn't have the parts on the truck to properly fix the unit. Knowing we would have to wait until morning, my wife suggested we get a 2nd opinion. Remembering that a family member knew someone in the business, I called and got CPR Air's phone number. I called just after 7:00am and Chuck answered the phone. I described the issue to him and almost immediately, he thought he knew what was wrong. In just a few hours, Chuck was at my home and fixed the unit very fast. As he thought - it was NOT what the other company's person said was wrong... the unit only needed a starter. Net-Net.... even though Chuck knew I was prepared to spend a considerable amount MORE, he was honest and completely transparent with me and saved me (at least) several hundred dollars. It's also worth nothing that while CPR Air is in Sugar Land, I'm near Cypress... so don't let distance keep you from calling. These guys are GOOD - they know what they are doing and will be completely upfront with you.

Description of Work
Replaced the starter in my AC unit with a better-than-OEM unit and checked the ACs overall functionality & performance.

I called at 5PM in the evening. Chuck was very responsive and came to my home within 2 hour. He seems very knowledgeable of AC unit. He was able to detect that water was the cause of the short. So that is what $159 is for, the inspection. That's too not bad considering it is an emergency call. But that ends there. The scam artist started to emerge. The next day he called back with an estimate of how much it will cost to replace the control board. He quoted ~$1000, where ~$700 was for the control board itself. This is extremely marked up and straight out a scam. I understand that company can mark up parts. But not by this much. He has a very car salesman attitude, very pushy. He started by using all the buzzwords, explaining to me how the new digital boards are so much more complex than the old analog boards, and therefore the price increase. He claims the price was quoted directly from Lennox themselves. I don't buy that claim. Little did he know, I am an Electrical Engineer myself. So all those buzzwords he used on me didn't really work. I understood right away exactly what he was trying to do. I normally don't try to challenge everyone with my expertise and let people do their job. But as he started he and quot;persuasion,and quot; I had to interrupt it. Bottomline is this. I called him so he can do the repair since I am busy with my own job. But I ended up with your typical pushy carsman, trying to make me buy an overpriced mudguard. Update: Since CPR so kindly gave the world his view on the situation. I got my AC fixed for less than the cost of his control board alone (See my other review). The 19W94 Ignition control board is an OEM control board. It does NOT cost $700, or anywhere close to it. Please go ahead and Google how much the 19W94 board cost if you feel the need. I fully understand the need for marking up parts, but his $700 price tag for the control board will NEVER be justified no matter how much he tries to sugar coat it. Have a nice day.

Description of Work
Emergency inspection for a shorted Lennox Furnace control board.

On July 30, 2013 at about 6:00 pm, we received a call from [removed member name]. He stated his A/C wasn’t working and he wanted Emergency Service that evening. We told him we have a 1 hour, 90 minute or a 2 hr, after hours emergency service available. He said “the 90 minute one was fine”. The price was $109.95 with a $10 off coupon discount. We gave him the reduced price even though he did not provide us the coupon. That price also includes 15 minutes of diagnostics. We arrived at his home in under 60 minutes. We checked his 4 ton system; T-Stat, 2006 Trane 14Seer Condenser with matching vertical evaporator coils and a 1993 Lennox Furnace. We found the problem with in the allotted time of 15 minutes. The Lennox Control board was rusted and burnt up. We also noticed the furnace was partially apart. The h/o stated he “changed the transformer that he purchased at a hardware store”. He said “he got low voltage but nothing works”. We noted an additional fan relay switch rewired in w/ the control board. We also found 1 and 1/2” of water standing in the emergency pan. The condensate water ran down and in to the furnace and the control board before entering the pan. The water had been leaking there for months, if not years, based on the amount of rust found all over the furnace components. We determined the board was beyond repair (fried) and needed to be replaced. We attempted to rewire the system temporally, so that the h/o, wife and their baby would have air conditioning until the repairs could be made that next morning. Unfortunately such repairs could not be done. (a minimal charge of $50/labor) We then explained to [removed member name] that he had many issues to be corrected. The Primary and secondary drain lines were clogged/ restricted. The emergency drain line tap off at the coil wasn’t added per Trane specs. Remove all the water from the emergency pan then raising the emergency pan 2 or 3” for better drainage and add a safety float switch to prevent future problems w/ water issues. Also install an original equipment; Lennox Control board, transformer, fusible link w/ fuse. Then possibility having to rewire the furnace. Because the age of furnace (1993) being analog and not a digital control board. We collected the service fee of $159.95. We then explained to [removed member name] that we will credit his prepaid service fee of $109.95 towards the repair of his Furnace. If he wants us to complete the job. That following morning we called Lennox for parts availability and cost. Lennox explained the news that they (Lennox) had revised that control board several times since 1993. They have added a control base, revised/updated control board, wire harness, ignition wire and an added sensor. The cost would be a several hundred dollars including the added parts/ supplies to correct the rest of his problems. We then called [removed member name] for the total repair cost to his Furnace. The Board along w/ the rest of the parts he needed to correctly fix/repair his furnace, safety and brought up to Sugar Land standard code. Then he can decide if he wanted to have the repairs done or not. After he heard the total cost of the upgraded o.e. factory Lennox parts and the other parts needed to complete the job. [removed member name] became very angry telling us that “He can build that control board for just a few dollars” and that he is “an engineer and does that for a living” [removed member name]then wanted to know why the parts cost so much. We then explain what the Lennox factory techs told us. [removed member name] then began raising his voice saying that “there is no way it costs that much and it’s not that complicated to build. We told [removed member name] that there might be generic parts out there. [removed member name] then asked us to check on a non o.e. factory control board. We then told [removed member name] that we will need to check w/ other suppliers for availability and cost. After several calls to many other dealers/suppliers of HVAC parts. We found 2 suppliers that may have a board with will work with that furnace. We then called [removed member name] back as he requested. We told [removed member name] what we found. [removed member name] then told us “to just forget it and don’t worry about it”, he “will take the afternoon off and build the control board himself. Then he said he “called another company and they will be there soon” We then told [removed member name] Good Luck with his repairs. Carrier, Lennox and Trane HVAC parts/equipment are generally much more expensive then the average HVAC systems. They however have been award winning for the best systems. When your able to afford them, homeowner want to keep them o.e. (original equipment) We have/had over the many years in business, some customers that are on a tight budget and/or on a very limited income. We do try to work with them on their issues regarding their HVAC problems. However there have been instances where we just can’t help them as in case of [removed member name]. We respectfully explain what they can do minimally to make their system junction safety and properly and what parts/ equipment they can wait on for repairs/replacement in the future. We wish [removed member name] and his family the best, even if we couldn’t help him at this time.

Service, Maintainance, Sales and Installations. All Brands of HVAC systems. Along with Residental and lite commerial Water Heaters.