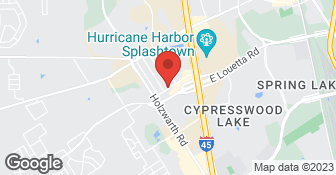 Family owned and operated since 1995, Air of Houston is a member of the BBB and ACCA. We are licensed, insured, and bonded, and we pride ourselves on customer service and satisfaction. Air of Houston accepts all major credit cards and we offer special financing with approved credit....

NO I WOULD NOT RECOMMEND THEM. Here are the facts: 1) The owner David Bunch came out to replace a capacitor. 2) It took him only 15 minutes. My house was only a 20 minute drive from his office, so I was surprised when he charged me $395, and paid by check. 3) After he left, I took a picture of the part and looked up the price online. It costs less than $30. 4) I called his office to ask why I was charged so much. The office manager, Sandra Bunch told me she would have him call me back. 5) A few hours later, David Bunch called back later in the day with Sandra Bunch also on the phone. He told me that he charges “two and a quarter” for replacing a capacitor, ie. $225. He said he would refund me the difference between what I paid, $395 and his usual price $225 6) Soon after that, Sandra Bunch sent me an email saying that instead they would mail me a refund check for the service fee of $69.95. 7) I emailed back informing her that was not what was agreed. 8) She emailed back telling pretending me that their flat fee for capacitors was $325, not what he said in the phone call. 9) They have have refused to refund ANYTHING.

Work was completed in just a few hours and very professionally done. Very pleased with the service and installers.

Carrier system was installed and it works great. The early summer and winter tune ups done by Air of Houston's technicians are knowledgeable and courteous. Today service tech Robert performed the early summer tune-up. Robert was professional and courteous. Did the job thoroughly and I was very happy with the end results.

Description of Work
A new A/C system was installed a couple years ago. Since the installation the service techs have maintained the systems.

Description of Work
AC was not cooling.

David Bunch was our technician and he was wonderful. Very friendly and knowledgeable! He was incredibly helpful. We had tried to install the Nest thermostat and ended up managing to knock out our A/C entirely (in Houston in July on the weekend). Air of Houston sent David out right away. He not only fixed the blown fuse, but also installed the system for us and made sure it was completely up and running before he left. Naturally, I am hopeful we will not need his service often, but I will never call another HVAC repair company again.

Description of Work
Fixed our A/C - came out on the weekend!

Technician indicated no problems and adequate levels of freon. Less than two months later, unit broke down needing more than 2 lbs of freon. With current system, it was impossible to lose that much freon so quickly. Initial technician assessment has haphazard and not detailed leading to more problems then not. Will not recommend this company.

Description of Work
15 point diagnostic test done on both AC units in our house.

In 2011 Sam partnered up with Jeremy Laurence. Together for 7 years Sam and Jeremy have worked hard to grow Air Woodlands and continue to work hard everyday to provide the best services for their clients. They customize their offerings based on specific needs. Fast, efficient, and honest, Air Woodlands A/C & Heating, has become a reputable and well-known service provider. The Air Woodlands team is up for every job, managing projects with the skill and experience their clients have come to expect. Their customers satisfaction with their work being their highest priority is why they provide open communication channels throughout the duration of each project.  …

Dr. Rescue Plumbing, Cooling & Heating is a family-owned business. That means that you get personal one-on-one interactions from a team that is dedicated to solving problems and providing great customer service. Our company is constantly training to become better masters of our craft and researching ways to stay competitive so that we can continue to grow and provide quality service to our communities." We Guarantee our work 100%  …

Air of Houston services both residential and commercial. We sell and service all makes and models of HVAC equipment.

How is AIR OF HOUSTON overall rated?

AIR OF HOUSTON is currently rated 3.2 overall out of 5.

What payment options does AIR OF HOUSTON provide

Ask AIR OF HOUSTON for details on free project estimates.

Does AIR OF HOUSTON offer a senior discount?

No, AIR OF HOUSTON does not offer a senior discount.

Are warranties offered by AIR OF HOUSTON?

What services does AIR OF HOUSTON offer?

AIR OF HOUSTON offers the following services: Air of Houston services both residential and commercial. We sell and service all makes and models of HVAC equipment.

Are there any services AIR OF HOUSTON does not offer?