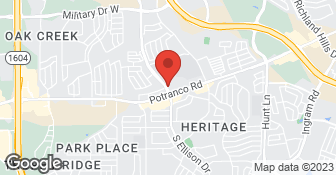 We do basically any type of home repair & remodeling. Crews from small jobs to large jobs. Over 25 years experience in all phases. 2 crws working at all times....

I would not recommend him. He did some fence work and painting work and he used the sprayer and he over sprayed and there was splatter on my windows. The fencing that he did he was supposed to remove it and take it off and he didn’t do t it. He never came back. His cost was high. He was personable, friendly and all that but he just didn’t do the clean up after the job and I had to do that. He left a mess. It was a trouble getting a receipt or a written bid and that was another thing that I wasn’t happy about. It was the clean up, the mess that he left that I was upset about and it wasn’t the work. He did some repair on the fence. He left the pile of lumber that he assured me that he was going to remove and he didn’t. I have a pile of lumber in the back yard and that was included in the work that he bid to do but he never took, so I had to dispose which I paid him to do. He sprayed while painting and I had a lot of overspray in my windows. He over sprayed so that was disappointing too. He was a personable guy and it wasn’t that but it was just that I didn’t expect to have overspray on everything. I had overspray on my hose, windows and everything outside. When you spray it is messy and he didn’t ask at all and the work wasn’t tidy. For the lot of money that I paid I expected it to be neater. I first met him, I had water line that was broken and he came and fixed that. If he had cleaned up I would have felt differently about him and I think once he got paid he was done.

Lujan Plumbing has over 30 years of expertise in the plumbing industry! Being a family owned and operated business, we are able to offer you that personal touch you've been looking for. At Lujan Plumbing, our goal is to make our customers happy. We believe in treating each customer like part of the family. We specialize in residential plumbing and drain cleaning, repair, and replacement solutions.  …

Our business is our livelihood but it is also so much more. New Day Floors LLC was started to fill in a void in the current market and to make a business that people can place their trust in. Over the years we have never lost our commitment to our clients and that is what has allowed us to succeed in a very competitive industry. The employees of New Day Floors LLC stand committed to our purpose and will provide the best service! We are open Saturdays by Appointment Only.  …

Welcome to River City Flooring. We are a proud San Antonio and Austin based distributor of premium flooring. We pride ourselves on our reputation for great prices, quality flooring, and fanatical customer service. Our specialty is premium grade Engineered Hardwoods, which we source directly from the manufacturer and buy in bulk containers. By cutting out the middle-men and buying in volume, we are able to pass our savings on to you. As owner/operators we are committed to helping our clients find the perfect flooring solution for their needs; from a simple home office, to a large commercial space, we offer solutions for every flooring need. Check out our profile to learn more about what sets us apart from our competition. We strive for 100% customer satisfaction on each and every job. Others may say it, but we actually mean it. That is why YOU WILL NOT PAY ONE PENNY UNTIL THE JOB IS COMPLETE AND YOU ARE 100% SATISFIED. No deposit. No half up front. Nothing until the job is complete. Try finding that with the "other guys!" We know you have many options and we appreciate your interest in our products and services. Contact us today for a free in-home estimate and consultation, or to schedule an appointment to see our new showroom off Wetmore and Thousand Oaks. Additional email: info@rcfhardwoods.com.  …

All statements concerning insurance, licenses, and bonds are informational only, and are self-reported. Since insurance, licenses and bonds can expire and can be cancelled, homeowners should always check such information for themselves.To find more licensing information for your state, visit our Find Licensing Requirements page.
General Information
Free Estimates
Ask for Details
Eco-Friendly Accreditations
No
Payment Options
Check
Senior Discount
10%
Emergency Service
Yes
Warranties
Yes

Handydude Service & Construction Co. is currently rated 3 overall out of 5.

No, Handydude Service & Construction Co. does not offer eco-friendly accreditations.

No, Handydude Service & Construction Co. does not offer a senior discount.

Are there any services Handydude Service & Construction Co. does not offer?