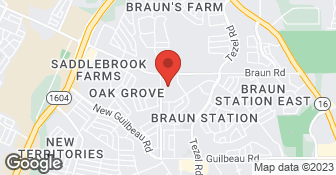 DV Roofing’s main office is located in San Antonio, TX. We work with residents and surrounding areas to bring you great roofing and quality service at an affordable price. Our goal is to make your home improvement needs quick, painless, and affordable....

I wanted to share my experience with DV Roofing and Remodeling. I fired them around 6 weeks ago due to finding out that they were trying to get away with over $3,000 worth of work that was not done. When meeting with David Violette and Roger the owners, they were professional and appeared to be an honest person. I clearly stated to David that I wanted all repairs done that the insurance was reimbursing for. When he came over with Roger to write up the contract, he did not include my window screens which the insurance was paying for (I thought it was an honest oversight). He quickly went down the check list mumbling some, but did not explain he was not listing everything the insurance was paying for and he did not explain that he had no intentions on replacing my felt as he was requesting reimbursement for (which is illegal). I found out the quality of work they do because they left a piece of my drip edge in the front of my house damaged. I called them back to fix a speaker they didn't reattach to the back of my house and to fix the drip edge. They came out and fixed both, but unfortunately did a sloppy job with my drip edge and the front of my house looked like it had a patch job done. It previously was a smooth piece of drip edge and now it had a patch. I called David to have him come out and look at the patch work that I was not happy with. I also called a second company to come out that is a Haag trained roof inspector. I wanted to get a second opinion on the patch job so I could discuss with David when he came. The inspector requested all the information about the repairs that should have been done and inspected to see if they were all done. He found over $3,000 worth of work that was not done. He took pictures of the work that was not completed. The inspector did not cost a lot, so I would recommend that everyone getting a roof done hire an inspector. David had also included damages for my fence as a supplemental check that he NEVER discussed with me. I had to meet with lawyers and the fraud department. It has been a nightmare. Because the insurance gave me the initial first payment and I had already paid DV Roofing the first check, they stated at this point it was a civl suit, prior to my paying him they could have stepped in. BEWARE where it says replace felt, if he scratches it out and writes in install he has no intention on tearing off your old felt and replacing with new felt (however he sure will collect money for it) and when he hand writes in on replacing the drip edge and writes "as needed" (but he requests reimbursement to replace it all). He tried to pocket this money. He gave me all these other excuses the other times we talked about where the $3000 went to and I discussed with the inspector, insurance, lawyers, and RCAT. They all stated he was full of bull and pocketing the money. The crew was extremely nice and professional and even though they had an inspector on sight, it is clear he is in on this poor quality of work as well. Please beware and choose another contractor. Thank goodness I recorded our conversations, because David can't lie about what he said. I have emails and recordings. DV Roofing was a horrible choice. Their website states that they have "best warranties in the industry, no short-cuts on materials or our superb craftsmanship". This is a complete lie. They cut corners (over $3,000 worth). Not replacing the felt in itself it "poor workmanship" not superb. Their warranty is also not the best. Most offer 10 year warranties, they offered 5 years. They committed fraud and mislead me. I should not have had to research every night and learn about roofing, nor should I have had to hire a certified roof inspector and lawyer. They are supposedly the professional in this field. David stated that all roofing companies do this, and they don't. That's why there is an association w/ ethical roofing companies that care to be a part of the association and uphold those standards. It is companies like DV Roofing that make roofing companies look bad. Please do not fall victim.

When it came to looking for a roofing company, I was meticulous. I wanted someone local, established (10 + years), no complaints, and BBB accredited. I spoke to four other companies before calling David at DV Roofing. It was important to hire someone local; a company that I knew would be around if something went wrong after the roof installation. I did not want to deal with storm chasers. DV Roofing was a great choice. They were very professional, on time every day, and they would keep me informed as the project moved along. They were very thorough and cleaned up exceptionally well. The whole staff was friendly. I had an situation where the insurance messed up the claim check and David was very understanding and helped me fix the situation. I strongly recommend DV roofing.

Very professional workers , good communication with supervisor and owner. Clean up was incredible, all questions were answer and was very happy with the outcome I will hire DV roofing again and will recommend to them to anyone who needs replace roof

After our home was inspected, we were advised to contact a reputable roofing company ASAP. I checked Angie’s list and found DV Roofing. I called and spoke with David about the information that was on our inspection report and he asked for a copy. I emailed it to him and within a few hours he called back and said he was sending Roger to visually inspect the roof. We set an appt for Tuesday. Roger called Tuesday morning and I asked to reschedule. He was very accommodating and set up for Thursday. He called Thursday to let me know he was on the way. Roger came in and thoroughly inspected the roof. He said it is structurally sound and I did not need a roof at this time. This company could have told me I needed the roof replaced down to the trusses and I would have believed them based on the inspection report we had gotten from our home inspector. He did not do that. That’s an honest company. You can be sure that when the time comes for a new roof, I will be calling DV Roofing. There are still honest, reputable, contractors. David and company top the list.

I am very happy with DV Roofing. Dave and his crew kept us up to date on the status of the job. They made every effort to protect items such as our A/C unit and plants from falling debris and even went so far as to lay sheets of plywood along our fence in an effort to minimize debris from going into our neighbors yards. And if it did, they went over and picked it up. The cleanup in and around our yard was very thorough. Hopefully Mother Nature won’t make us have to replace our roof anytime soon but if so, I wouldn’t hesitate call on DV Roofing again.

They were great to deal with and they explained everything I had a question about and they told me what they doing. A supervisor was at the job too. Rob

David was great!! He was honest and down to earth. His crew did a wonderful job on my roof. His crew was very friendly

It took me a long time to find David, who proved to be a skilled and trustworthy person. I had interviewed a lot of roofers, but could not find one that I trusted to do a good job on my very large tile roof. David and his crew were skilled and determined to do the job right. They worked hard to repair rotten fascia boards in hard to reach places. I would trust David and his crew to do the job right and stand behind his work.

We hired David to replace our roof after Hurricane Harvey. All I can say is phenomenal!! From beginning to end, David and his team did everything to make sure all went right. David answered all my questions about the roof itself and the installation, his insurance specialist went to bat for us with the insurance company and the roofing crew came on time - worked from dawn 'til dark - and left our property in pristine condition when finished. I can't say enough positive things about the company. I would not hesitate to hire them again or recommend them to anyone considering a roof repair or replacement.

Y'all were nothing but a joy to work for. thank you
5.0

David and his team are great to work with! He is honest and cares that the work is done correctly the first time. I will use DV Roofing for all my roofing needs.

Lujan Plumbing has over 30 years of expertise in the plumbing industry! Being a family owned and operated business, we are able to offer you that personal touch you've been looking for. At Lujan Plumbing, our goal is to make our customers happy. We believe in treating each customer like part of the family. We specialize in residential plumbing and drain cleaning, repair, and replacement solutions.  …

DV Roofing & Remodeling is currently rated 4.8 overall out of 5.

No, DV Roofing & Remodeling does not offer eco-friendly accreditations.