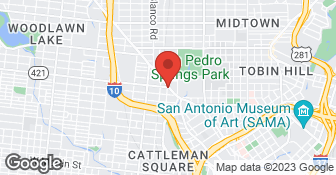 Reyven Contracting is a Veteran Owned and Operated Home Improvement Contractor business in San Antonio and the surrounding area. We are licensed and insured so you can have peace of mind. We follow three simple principles: Be Honest, Provide the Highest Quality, and Remain Accountable to the Client. We strive to create enduring relationships and be the number one trusted Home Improvement service in San Antonio. Your complete satisfaction is the only true measure of a job well done! When you hire our services, rest assured you will get the highest level of customer service that you deserve and need. Get in touch today, and discover the advantage of working with Reyven Contracting.  …

At Re-Bath, we handle every detail of your bathroom remodel from consultation and design to selection of quality products, removal and installation. Best of all, our licensed, insured Re-Bath teams typically complete projects in just a few days, not weeks. Design guidance. Quality products. Professional installation. Everything you need for the perfect bathroom, all from one bathroom remodeling company.  …

They did not return phone calls. We had an appointment to get an estimate scheduled that I had to take off from work for and they never showed up nor did they call to reschedule with me. When I did reach them, the office manager had some lame excuse about the estimator being buried with other projects but when I talked to the estimator he told me he had jury duty. If they lie to me before we even get started my expectation is they will lie to me later as well.

Description of Work
I was looking for them to remodel one of my bathrooms and do a little sheetrock work, but decided not to use them based upon my initial experience with them.

Bruce did an excellent job of completing this installation. Our floor looks really nice and the quality of the entire process was beautiful. I am also very happy with the price he gave us as it came in about 200 dollars less than his estimate.

Description of Work
This contractor took out a long hallway floor for us and discarded all the waste. He then installed a brand new marble floor, taking a full day to complete the job.

Gave contractor $5000.00 deposit. Did not get a firm start date after 30 days. Did not return calls as promised with start date. Made appointment to bring samples of wood for kitchen cabinets. Did not arrive, nor did we get a cancellation telephone call.