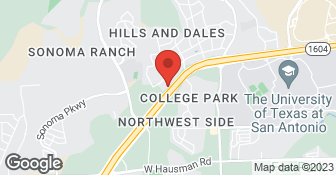 The pool has been the biggest headache, it has been a big disaster, somewhat of a disaster. They started in June, June 24 and they completed late September. I liked their pricing. They need a whole new project manager for the guy that was overseeing our project. There was no communication. There was lack of communication, lack of presence, lack of attention to detail, from that project guy. What they did is, they did the pool and they messed up on the plumbing, so then they had to drill into all of the jets that we had installed. There was like 15 or 20 jets, so they had to drill in. I have pictures of it all. They had to drill in and redo it. They installed the light, the light that we had installed was a defect. But again, he didn't know it and realize until once they poured the water in there. So, the light wouldn't work. So we had to call and wait for them to come out there and replace it. The heater that they brought in doesn't work. So they replaced all these parts in the heater because we wanted to heat the pool. It turns out, they had the manufacturer rep come out and look at the heater as well and now they're saying that we need a whole new gas meter because that is what is causing the problem. I overheard the rep say, "Look, the piping that you use is one inch off from there to here. Why did you use one inch all the way over here?" The guy couldn't explain it. But now they're saying we need a bigger meter, I guess because they're not wanting to replace the piping. So either we're going to have to pay for s new meter or something, I don't know. Not only that, they had, in the beginning stages of the building of the process of the pool, they backed into our fence with the Bobcat multiple times. Our fence line neighbors up with three other fences because we have a long driveway. So they ruined that whole fence that backs up to three different neighbors and the most they did was credit us $300 for the materials and I told him, "Okay, we still have to pay for labor and you guys have left it like this for two or three months along with the heat, the rain, the wind and now the whole entire fence is compromised because it's all leaning and wobbling, warped and what not. So now we have to replace the whole fence, but they're only wanting to replace what they messed up. It was our mistake, but we're not going to clean it up, we're not going to offer more than what we feel that we're responsible what we broke but now that we compromise the rest of the fence, it's your mess to clean up. So it's a big mess. I will never use them again, I will never recommend them again. Their project manager should have done a better job to be out there, not just being out there but overseeing the project correctly. In my professional world I have to make a list of everything I do and everything I'm doing with budget cost and what not. I handle a portion of my company's money, so I've got to be accountable for where it goes and what is the return on investment. So, for me to be on this side of the fence, knowing that he should have been as professional as anyone else out there would be expected to, I think he failed. If I was them, I would be looking for a new project manager.

Description of Work
We just got a new in-ground pool.

i PAY HIM AND HE GAVE ME EXTRA BUSINESS CARDS AND I GAVE HIM BUSINESS CARDS FOR MY NEW BUSINESS. MY WEB PAGE IS WELCOME SPRING MELONIE WRAPS.MY IT WORKS. HE STATED HE WAS GOING TO MAKE A ORDER. DOING BUSINESS WITH WHOM YOU TRUST.

Description of Work
H3 WAS VERY PROFESSSIONAL AND GOOD LOOKING. I APPRECITATED HIS HONESTY AND TRUST.

Blue Heaven send a man to my house to inspect the unfinished work of Gonzalez. I was told that Gonzalez will come and finish the work. TO this date I have not see not heard from Gonzalez nor Blue Heaven Pool. The man that was sent by Blue Heaven, is a Field Superintendant for Blue Heaven, Jorge Arevalo. It has been several months and I am still with a cracked walkway and unfinished work around the pool.

The representative helped design our dream pool. The pool exceeded our budget, but we hope to proceed next year. I would consider this company again.

Description of Work
Blue Haven quoted a beautiful pool design. It was freeform, with the bell and whistles (pebble bottom, ozone, waterfall).

I made initial contact with the Rep: Jay Hale. He was very knowledgeable and helpful in the initial start-up process. I will be getting an official quote soon. I will keep the Angie's List Members abreast of the situation and if a contract is awarded.

Description of Work
I asked for a free quote from the company.

I wouldn't go with anyone else. These people are great! From the conception of the pool to the finish of the pool, it's been the least painless we've had to do period. Whatever you want them to do, if you're not pleased with it, they'll fix it!

Description of Work
They installed a new free-form pool at our home. They designed and built it. It's beautiful! They also installed stone steps (Arizona Flagstone) around the pool and built a deck.

I have called Blue Haven Pool and stated the situation - so far, I have not received an answer either. I have contacted Angies List, I have contacted the Better Bussiness Buro - I still have the crack in the sidewalk, the work is still not finished and the Warranty seems to be nill.

Description of Work
Blue Haven Pool apparently does not follow up on their recommendations of sub-contracters. Blue Haven recommended a Mr Edward Gonzalez to redo the sidewalk around my pool. He did not finish the work, does not recognize the 2 year WArranty he gave me - I have not heard from Edward Gonzalez at all.

Although their price was slightly higher than others, the work they did was excellent/prompt. They built our pool 16 years ago, and I will only use their services in the future. The problems/solutions were clearly explained. Jim, the lead service tech, may be a bit "gruff," however, he seems to be honest and sincerely committed to the work he performs. All systems were brought to "code," and performed in a timely manner.

Description of Work
I had them replace the motor on my pool pump, as well as, replace the pool light, light housing, and conduit. The previous owner had poorly repaired the damaged wiring/conduit.

We are based locally, call today for pool services and more!  …

We at Texas Eco Pools Provide Weekly pool cleanings and chemicals to our customers. With over 30 years of experience, we guarantee the best customer service you could imagine. We strive to not only earn your business, but to retain a long lasting relationship with each homeowner we meet. We also guarantee with our eco pool cleaning experience, that your pool will always remain in top quality condition and be the hotspot for your gatherings :). We promise not to let you down and cannot wait to hear from you.  …

Fusion Pool Service takes care of the maintenance and service of your pool. We offer pool service to both residential and commercial clients in San Antonio, TX.  …

BLUE HAVEN POOLS OF SAN ANTONIO & AUSTIN is currently rated 3.8 overall out of 5.

No, BLUE HAVEN POOLS OF SAN ANTONIO & AUSTIN does not offer eco-friendly accreditations.

Are there any services BLUE HAVEN POOLS OF SAN ANTONIO & AUSTIN does not offer?