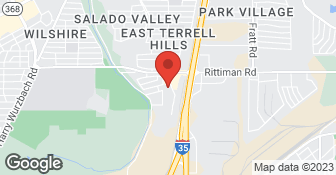 All Star Electric can handle all of your electrical needs in San Antonio, TX and the surrounding area. Residential or commercial, no job is too big or too small. With over 40 years experience, we can correct the problem with the code of other electricians or troubleshoot those difficult problems....

Work was done some four years ago now, but we had a coupon and they did great work.

Description of Work
Kitchen light and bathroom light not working

Quickly and efficiently. I supplied the switch.

Fantastic. Could not be more pleased

Very professional, kept us informed, offered options Will definitely use them again

Description of Work
Repairs and upgrades

The whole operation was outstanding. The telephone representative quoted a price which I thought was very reasonable. We first set the date for what was labor day. She called back and we moved the date forward. The installers arrived 30 minutes ahead of time. They did the work efficiently. They were both friendly and courteous. They cleaned up after themselves. The replacement ceiling fan was not easy in that we have a 22 foot ceiling. We will use this company again for any electrical work.

I purchased new kitchen lighting (2 pendants and one large flush mount) and decided to call All Star based on their Angie's List reviews. SO GLAD I DID! Tamra was excellent and was able to get a me a technician the same day. Bobby arrived on time and was able to put my lights up with no problem. These lights weren't marked and he performed the necessary testing prior to connecting to ensure he wired it correctly. He was so careful with the lighting and my furniture/island. He also made sure the lighting had a strong hold to the ceiling by adding more screws for support. This was a tricky install and he was DEFINITELY a pro! He did a fantastic job! I will definitely be using them again.

I have ;used All Star Electric since they did some work as a subcontractor for some remodeling in 2010. I had them do some extensive upgrade work in The work went very well. We had a development home built in 1965 which had basic electrical wiring and circuitry. With the evolution of electrical appliances, computers, televisions, etc, our house just needed upgrading. Also, the layout for the circuitry for some of the lighting was no longer practical for our needs and needed upgrading.

Description of Work
Addition of a larger electrical panel, addition of circuits, and reconfiguration of light switches

It was a very difficult job in miserable conditions. The craftsman was cheerful and hard working. I am looking forward to working with them again.

Very well; they were very thorough and efficient

Thank you! It was a pleasure doing business with you.
5.0

I first reached out for a estimate on a Saturday when they were closed - but I sent a email anyway. Within a hour Rich reached out to me, gave me a solid estimate for the work and asked that I call the office Monday to scheduled the appointment. On the installation day, Eric arrived promptly at 8, he did great work and completely cleaned up after each fan was installed. He did an excellent job. All the fans work and they are perfectly balanced. I had asked that they take the old ceiling fans away so I didn't have to dispose of them and they took care of this for me as well.

great! Even had them change a couple other light fixtures while they were here.

The company I did hire (City Wide Electric), sent an estimator out who spent almost an hour going over the house and sent me an estimate WITHOUT CHARGING me anything.

Description of Work
I contacted the company via email and asked to have a quote/estimate done on my older home for work to bring it up to code. I received a phone call and was told that there would be a "dispatch and diagnostic fee" of $175! I've had two other companies out to do estimates and am waiting for their quotes on the work. They didn't charge for the estimates, but if there had been a reasonable fee for the 30 minutes it took to check over the house I'd be willing to pay. I feel that $175 is an unreasonable amount for this service, and will not be using this company for any of their services, now or in the future.

He completed the job, he just wasn’t friendly at all. He seemed annoyed. I think the job was overpriced even with the discount.

Description of Work
Fixed some plugs, repaired a light switch.

Terrible Service and Poor Customer Service Skills. Work Never Got Done due to their 3 cancellations to scheduled appointments. Every time, they were scheduled to come, they would canceled and were even late calling about it. I would never deal with them again. Worst service in all my years with Angie's List.

very well. would highly recommend them.

Description of Work
Helped me with the propane connection for my fireplace. he disconnected so it would be a wood fireplace. I was very happy with that

They did an outstanding Job and when something took longer due to problem solving an issue the did not charge me.

Description of Work
Several light switches replaced all over the house

To do the first two items would've been another $265 and I had to pay an additional $90 just to have a fan replaced with another - in other words, they charged me $139 just to replace one fan with another - took him about 45 minutes. Later, I had an electrician do the first two items AND repair a large 72" fan in the living room and for only $99. Would not use this company again - far too expensive for the work done.

On time and work performed correctly

It went quite well. It was a little too expensive.

Good Morning Mr. [Member Name Removed], I apologize if there is an issue with the fan install. Please give us a call so we can get you on the schedule and we will send someone out to fix the issue. Julia Frazier Office Manager 210-391-0274
5.0

The Electrician showed up and was friendly and professional. He performed the work in a timely manner. He did a satisfactory job. I would recommend them. I would use them again.

We had asked the company not to send the guy who did our last job, since he didn't clean; which they agreed. Well, the same guy showed up to do the work! This time, however, he cleaned as he went, and left the room clean when he left. The issue this time was that we had hired them to move the ceiling fan and were told that he would "cap" the old outlet. Well, he did with a metal plate which did not cover the drywall cut out, instead of using an actual white cap to cover it all (as other electricians do!). Who does that? Would he do that at his own home? No! We were told we had to go out and buy our own white cover at Lowe's. Shocking! We will not be calling this company for further projects since we have not been happy with the last two out of four calls. Shame. :(

I am sorry for any issues you had with your service. During the last job that you referred to in the review, our employee did not clean to our standards. He was instructed to leave the old vent fan in the attic by your husband. We reprimanded him for that because we don't leave things behind like the fan in the attic, even if a client says it's okay to leave them. When we spoke to you before the next service, we said that either he could do the work for this service, or we would have to schedule another day to do the service because he was the only technician we had available that day. You said it was fine for him to do the service, so that is the route we went. You called our office to make payment after the service was done, and you didn't mention anything about the plate not being what you wanted. We could easily have resolved this if we had known there was a problem. I will gladly refund you the cost of the plate you went and purchased if you would like. Please let me know if there is anything I can do to help you. Again I am sorry you were disappointed with the service. Thank you and have a good day.

We specialize in electrical services, repairs, installs, lighting, generators, panel upgrades, ceiling fans, and more! We guarantee your satisfaction, and we won’t leave until the job is done right. We pride ourselves on the quality work we provide, while delivering great customer service! Check out all the services we offer below and call -or- click to schedule a free estimate today!  …

Why should you consider Allgood Electric? Live friendly people answering our phones, we will take care of your Property by wearing floor protectors and work mats or tarps Courtesy call when tech is on way We will listen to your concerns with non-technical language. Upfront agreed upon price before any work is done .  …

How is All Star Electric overall rated?

All Star Electric is currently rated 4.8 overall out of 5.

What days are All Star Electric open?

All Star Electric is open:

What payment options does All Star Electric provide

Does All Star Electric offer a senior discount?

Are warranties offered by All Star Electric?

What services does All Star Electric offer?

Are there any services All Star Electric does not offer?