All Squared Away Construction, LLC 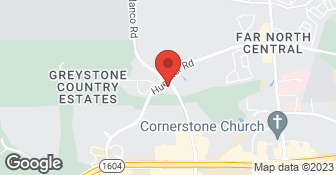 All Squared Away Construction LLC was established in 2013 by Justin Morgan with the goal of becoming San Antonio's best general contracting firm. Specializing in multi-family housing and residential remodeling, one of our greatest assets is the level of commitment we bring to every job. The integrity of our company begins with strong work ethic combined with a highly experienced and knowledgeable team creating the ultimate foundation for any project. Our main focus is client satisfaction along with meeting expectations to achieve project success....

Terrible. Do not trust this contractor. Substandard work throughout (collapsing bedroom ceiling after framing and drywall was applied to enlarge the bedroom), very poor quality painting, dangerous and shoddy electrical work in my attic, and the contractor failed to repair the damage his debris bin caused to my asphalt driveway. Absolutely terrible experience. Sadly, the VA Regional Office in Houston paid him in full and denied me the opportunity to contest his outright lies about the asphalt damage. I shudder to think what happens to my fellow disabled Veterans who lack the background I have in electrical work, painting, etc. when this contractor does VA funded remodeling in their homes. I’ve had to involve VA Headquarters in Washington DC on these issues. I am a longtime Veterans advocate. David K Winnett, Jr. Captain, USMC (Ret.) 100% Disabled Veteran (Paraplegic) Programmatic Review Panelist for Congressionally Directed Medical Research Programs (CDMRP) Advocate, Veterans for Common Sense

I'm still using them and I'll continue to do so.

Description of Work
I use All Squared Away Construction.

After 17 years, the cedar flooring on my deck needed to be replaced. The deck had been custom built, and was over 800 square feet. I had already had a number of estimates, and none of them had met my budget requirements. I had seen Justin's ad in our community news letter and gave him a call. He and his crew supervisor came out the same day to see what I had, and what I wanted done and what my budget was. He actually listened! He pulled up some of the boards and got under the deck to inspect the sub-structure. He looked at the pergola and the railing, and told me that they did not need replacing. He then suggested that I just needed the flooring replaced, and the railing and pergola needed a fresh coat of paint. This was refreshing, and for the first time I began to think that it was going to work. They left and Justin said he would get me an estimate. That evening, he emailed an estimate to me. He had three estimates; the cost for treated wood, the cost for cedar, and the cost for composite decking. Another company had given me an estimate for composite decking, and the price was 150% over my budget. Justin's price was less than half of what the other company had bid. I asked Justin why his bid was so much lower, and he said that one of the box stores had their own private label composite decking, and not only was it significantly lower in cost but the store had it on sale. We chose the composite decking, and signed the contract. They started work the following Monday, in contrast to waiting for 2-4 weeks. Even with several rainy days, his crew had the job done by the following Monday. They showed up at 8:00AM and left at 5:00PM each day. The crew was friendly and courteous. They really did great work, and cleaned up our back yard when it was over. We now have a lovely new deck to enjoy for many years. Justin listened to me, and gave me options to consider. He never pushed me in any direction in deciding which material to use. He respected the fact that I had a budget to work with, and he found the materials that fit inside the budget. Oh, and Justin is a Marine veteran. An additional reason to consider using him.

Description of Work
Rebuilt my deck.

Justin promised he'd be here at 9:00 AM, and I could have set my watch by it. Arrived on time, they quickly and completely dove into the work, cleaning up all debris and removing sagging/bent timbers for disposal. It was literally a turn-key job from start to finish. I couldn't be happier with his work! Justin is a former Marine, and you can certainly tell, judging by the work ethic exhibited by his crew. They were straight up awesome! The name of his company really is "truth in advertising"! Great quality work!!

Description of Work
Other bids did not want to do the quantity and quality work that Justin proposed. My deck was totally warped and sagging; Justin's crew replaced supports with 2 x 8's (where 2x6's had been) and all supports were further strengthened by anchoring them to the raised foundation and installing additional gussets to further strengthen the structure. This newly supported deck should take a beating for years!!

Thank you for your support!!!

Since 2014, Spartan Contractors has specialized in professional quality renovations and repairs throughout greater San Antonio and the surrounding Texas Hill Country area. From full roof, siding and window replacements and repairs to storm damage restoration jobs and insurance claim assistance, we offer an extensive scope of services customized to match the unique weather of the region. We work with a wide assortment of different materials and have longstanding relationships with some of the best material suppliers around.  …

Family owned and operated Alvarado's Masonry Construction & Remodeling is a full service masonry company offering superior quality craftsmanship in San Antonio & surrounding areas. Specializing in brick, stone, block, glass block, flat stone, stone veneer, indoor & outdoor fireplaces, pizza ovens, chimneys, flower feds, BBQ, grills, mail boxes, retaining walls, walkways, any type of masonry job you can think of I can do for you. I am a Registered Home Improvement Contractor & I can also help you with any home improvement project you might have in mind, indoor & outdoor. I take great pride in performing only high quality work and to help keep costs down for our customers, We do all of our work, and I am always present to work & supervise. Cost is determined by the job & to ensure both parties are protected a Contract will always be provided along with a Warranty. Either myself or my wife will answer your call. We will be happy to work around your busy schedule & will schedule an appointment on your time. Call & ask For Jose Luis BBB member with A rating!!!  …

We are a full-service masonry co., locally owned & operated, & do all types of masonry work from entire new houses to commercial buildings to small mortar crack repairs. No job is too small as we treat all projects equally. We place extreme importance in our service, quality of work, & happiness of every customer. We want to give each customer "more than their money's worth" at every opportunity we can. Angie's list winner of "the 2009 Super Service Award"(2 awards), "2010 Super Service Award" (5 awards), 2011 award (8 awards), 2012 award (4 awards), and 2013 award (5 awards), 2014 awards, & every year including the newest 2018 awards. Always a perfect rating on the BBB. Ambassador membership of the Texas State Historical Association. NOTICE: Due to our blessing of success from a great reputation & quality work, along with an increased number of Angie's List members in San Antonio, etc., please allow extra time in me returning calls. We can still do rush jobs, etc. it's just that at times I'm extremely busy & get very many calls all on the same day. I like to stay small enough without a huge amount of employees, to ensure hands-on quality in work & correctness & in me doing all sales calls. But I surely will return your call the first possible chance. Thanks! Bob  …

Frequently Asked Questions & Answers about All Squared Away Construction, LLC

How is All Squared Away Construction, LLC overall rated?

All Squared Away Construction, LLC is currently rated 4.2 overall out of 5.

What days are All Squared Away Construction, LLC open?

All Squared Away Construction, LLC is open:

What payment options does All Squared Away Construction, LLC provide

Does All Squared Away Construction, LLC offer free estimates?

Does All Squared Away Construction, LLC offer eco-friendly accreditations?

No, All Squared Away Construction, LLC does not offer eco-friendly accreditations.

Does All Squared Away Construction, LLC offer a senior discount?

No, All Squared Away Construction, LLC does not offer a senior discount.

Are warranties offered by All Squared Away Construction, LLC?

What services does All Squared Away Construction, LLC offer?

All Squared Away Construction, LLC offers the following services: Home Building and Remodeling