ALL IN ONE APPLIANCE 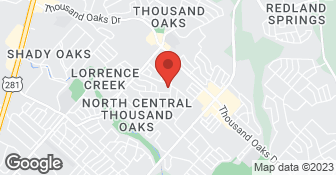 It was excellent. They were courteous, knowledgeable, and very professional.

Description of Work
They fixed the dish washer.

All In One Appliance Repair provided great service from beginning to end! Excellent communication, prompt scheduling, on-time arrival, very professional, friendly, and happy to answer all my questions. Couldn't have been more pleased.

David came (with part in hand) and replaced the valve quickly & efficiently. He knows his appliances and I'd **** anytime I need those sort of repairs made. Please note, I used him thru my home warranty service (AHS) - I paid the "trade fee" of $75 (as stated below) but he said that service would have been $125 - $130 without the warranty.

Description of Work
I needed to have the water mixing valve inside my washer repaired or replaced.

Super quick response! I called the home warranty company on Saturday, received a call from David to set an appointment for Monday morning. Chris arrived 5 minutes early and determined the control panel died. The part needed to be ordered with an anticipated delivery of date of 2 weeks due to the washer brand (Fisher & Paykel) and age (11 yrs). Th part arrived a week early and installed mid-morning on the same day. Kudos!!!

Description of Work
Washer repair. Began a 3rd load of laundry, the washer filled with water and died during the wash cycle. Called my home warranty company and selected All In One Appliance from the choices available due to reviews on Angie's List.

This was the most amazing repair experience I've ever had. The washer broke at 9:30 a.m. I put in a work order on line with the home warranty company at about 9:45. Got a call from All in One at about 10:30, asked if he could come around lunch time. David arrived about noon, quickly diagnosed the problem, and fixed it. By 12:45 p.m. the job was done and the laundry was back on track, three hours from break to repair. Great experience. Very professional. I would call him again in a minute. If I could give an A+++ rating I would. Cost was the $75 home warranty fee.

Description of Work
Washer stopped working mid-cycle. Wouldn't drain or spin. Turned out to be a worn out switch.

They were fabulous. They went above and beyond for me. They are very professional and answered all of my questions. They show up on time. I can not say enough good things about them.

Description of Work
They have done 2 different jobs for me through American Home Shield. They fixed my dryer. They also replaced a part in my washer, however I chose to have it replaced.

They did a fine job.

Description of Work
We used All In One Appliance. We have an agreement with our home insurance. It was like a maintenance call on our A/C system. They checked and made sure our A/C system was working.

Description of Work
Installed replacement wall oven. They have also done warranty work and checked out other appliances for me. Very friendly, helpful, considerate of price concerns.

He told me my old washer was not worth fixing because the drum had cracked.

Description of Work
I had to buy a new washing machine.

He was very good but the only issue was miscommunication. He told me I needed to get a chimney sweep, but he did not clarify the urgency. He had repaired my dryer, and I was not aware that the chimney sweep was in order to keep the dryer from breaking again. Otherwise he was very nice and very helpful.

Description of Work
They repaired my dryer.

They were punctual. The technician really knew what he was doing and was personable and professional. He fixed the dishwasher in the same day. He was really good about explaining to me my options. I would definitely call them back.

Description of Work
All In One Appliance Repair was sent by American Home Shield to check and replace the dishwasher.

It went very well. The service person diagnosed the problem (dead dishwasher), searched for parts, and found that no parts were available for my 10 year old model. I ordered a new dishwasher thru my home warranty service, then All in One installed it and hauled away the old one. The service man was very nice and professional. He instructed me on how to use the new dishwasher after installing it.

Description of Work
All in One installed my new dishwasher (I went through our home warranty service, so I only paid $60).

I've used him multiple times previously. I have recommended him to others with great results. He is fantastic! Very courteous, punctual, and reasonably priced.

Description of Work
He made a second repair on my washing machine.

For once the home appliance warrantee company got it right (though probably by accident). I had a fault code on my built-in oven--it would beep incessantly and then shut off while cooking. The home warrantee company sent All In One appliance repair company over to diagnose the problem. Usually the companies/people they send have poor ratings-- both on Angie's list and with the BBB, but this time I got lucky. All In One is a small (2-person), fairly new company. Chris came over to diagnose the error code. He checked the connections and made some adjustments and told me to use the oven and call him if I continued to receive an error code--there was no error code when he turned on the oven following his adjustments. After he left, I did receive the error code that week and called him back. He was very responsive and made an appointment around my schedule. Upon return, he discovered two error codes and promptly replaced both faulty parts. I used this company in the past and found both partners to be very prompt, courteous, honest, and knowledgeable.

Description of Work
Repaired built-in wall oven. There was an error code indicated when the oven to beep and shut off while cooking. Upon diagnosis, two error-codes were discovered; the technician, Chris, promptly repaired both faulty parts-- I was only charged the home appliance warrantee company's fee ($60).

He is just great, a warranty company uses him and sends him out to their customers. He is such a nice guy and he is kind of a one man band. He is excellent and very courteous.

Description of Work
He just installed a dishwasher; he has been out twice for me.

They are excellent. They are always on time, courteous, professional, he's just the greatest. The price was extremely reasonable.

Description of Work
He repaired my dishwasher and washing machine.

Welcome to San Antonio appliance repair service ! Our factory trained and certified technicians will impress you with their prompt arrival and accurate diagnosis of your appliance. You will then be given an estimate of repair that is not only guanteed but is usually priced lower than our competitors.Now you may ask, How can we do this? Our lower repair rates are achieved by having well stocked trucks,oranized scheduling and a low overhead.  …

Insured
All statements concerning insurance, licenses, and bonds are informational only, and are self-reported. Since insurance, licenses and bonds can expire and can be cancelled, homeowners should always check such information for themselves.To find more licensing information for your state, visit our Find Licensing Requirements page.
General Information
Free Estimates
No
Eco-Friendly Accreditations
No
Payment Options
Check
Senior Discount
NO
Warranties
Yes

No sealed systems, no plumbing or electrical issues.

Frequently Asked Questions & Answers about ALL IN ONE APPLIANCE

How is ALL IN ONE APPLIANCE overall rated?

ALL IN ONE APPLIANCE is currently rated 5 overall out of 5.

What days are ALL IN ONE APPLIANCE open?

ALL IN ONE APPLIANCE is open:

What payment options does ALL IN ONE APPLIANCE provide

ALL IN ONE APPLIANCE accepts the following forms of payment: Check

Does ALL IN ONE APPLIANCE offer free estimates?

No, ALL IN ONE APPLIANCE does not offer free project estimates.

Does ALL IN ONE APPLIANCE offer eco-friendly accreditations?

No, ALL IN ONE APPLIANCE does not offer eco-friendly accreditations.

Does ALL IN ONE APPLIANCE offer a senior discount?

No, ALL IN ONE APPLIANCE does not offer a senior discount.

Are warranties offered by ALL IN ONE APPLIANCE?

Yes, ALL IN ONE APPLIANCE offers warranties.

What services does ALL IN ONE APPLIANCE offer?

Are there any services ALL IN ONE APPLIANCE does not offer?

No sealed systems, no plumbing or electrical issues.